Anvil Rock is a characteristic lookout point in the Blackheath area of the Blue Mountains, from where visitors can enjoy incredible 360 degree Grose Valley views.

A visit to the Wind Eroded Cave is a must too, a unique rock formation shaped like a wave-like overhang, created by wind erosion.

Both of these fascinating sights can be accessed via two short walking tracks, with even more lookout points nearby to make a day of it.

To get to Anvil Rock, turn into Hat Hill Road in Blackheath. Stay on this road until it evolves into Perrys Lookdown Road which is an unsealed road.

At the fork towards the end of the road, stay left to get to the small car park where the start of the short walking track to Anvil Rock is located. This is also where you will find the path to the Wind Eroded Cave (see Google map).

Note that the last few kilometres to the car park is on an unsealed road, but this can be done with a normal 2WD vehicle. Just be careful with wet weather when the road can get muddy.

This map will give you an idea where the two sights are located:

Once you’ve parked your car, look out for the sign that marks the start of the short walking track to Anvil Rock.

It’s only about 250 metres to the lookout from the car park, and the path itself is very well maintained. At the end of the walk is a set of stairs that will get you onto the lookout platform.

The walking track passes a small bench, perfectly positioned with a north-facing aspect overlooking the valley with fantastic views.

By all means, grab a seat and take it all in.

The track soon arrives at Anvil Rock, so named because of the shape of the rock formation. With a bit of imagination, it does look a bit like an anvil.

There is a set of rock stairs with metal handrails that lead to a large viewing platform, followed by a second set of stairs that lead to the very top of Anvil Rock.

There is actually a real anvil installed on top of the rock, with a bunch of arrows pointing to other landmarks in this area of the Blue Mountains and beyond.

The fenced lookout platform itself is round-shaped, and quite literally offers 360 degree views that stretch as far as the eyes can see on a clear and sunny day.

Anvil Rock really is one of the best lookouts to be found in the Blue Mountains, and the lack of big tourist crowds coupled with the isolated atmosphere make the experience even more enjoyable.

Once you’ve finished admiring the views at Anvil Rock, retrace your steps back to the car park to get ready for the next unique rock formation.

The start of the walking track to the Wind Eroded Cave is just on the opposite side of the car park, very easy to find.

It’s very short walk along an easy to follow path, and it will only take a few moments to get there.

The Wind Eroded Cave is quite a remarkable site.

It’s a massive rock overhang in the shape of a wave with beautiful patterns in the sandstone as if it was under water.

It’s also known as Wave Rock, and is a result of continuous wind erosion. There’s lots of space to wander around and to have a closer look at this unique natural sight.

If you’re visiting Anvil Rock, there are two more lookouts very close by that are worth a visit. Perrys Lookdown is literally just around the corner of Anvil Rock, and Pulpit Rock can be accessed via Pulpit Rock Road off Hat Hill Road. 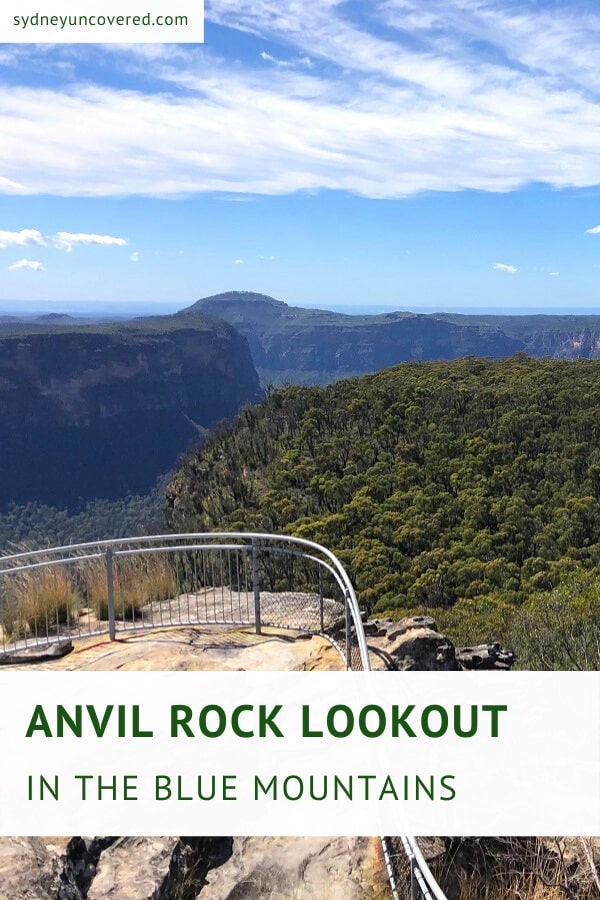