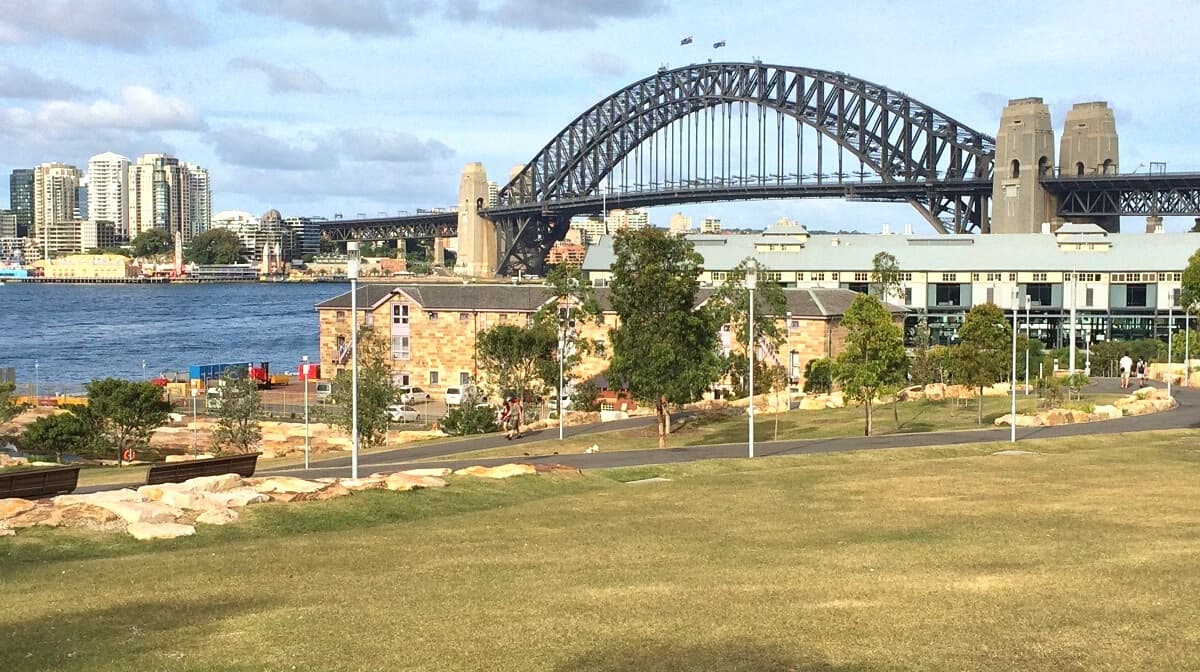 Located on the western side of the Sydney CBD, Barangaroo Reserve is a modern Sydney Harbour foreshore park, characterised by beautiful landscaping, open grassy areas, and several walking paths.

The new reserve was constructed as part of the Barangaroo transformation project, which has changed an old industrial site into a thriving business, entertainment and leisure precinct.

Read on, and learn more about this beautiful new park in Sydney Harbour and the Barangaroo Foreshore walk.

Getting to Barangaroo Reserve is easy. You can catch a train, bus or ferry, or you can go by car and park underneath the reserve.

1. Train:
The two closest train stations are Circular Quay and Wynyard, both around 1km away from the reserve.

From Circular Quay station, you can follow the shoreline under the Harbour Bridge and past Walsh Bay to the reserve. Or otherwise, you can walk through The Rocks and Millers Point.

From Wynyard station, walk through the new underground pedestrian link to the Barangaroo foreshore, and walk to the reserve from there. Read further below for a description of this new walking path.

2. Bus:
There are various bus routes to and from Town Hall, Wynyard and Circular Quay in the city, from where you can walk to Barangaroo.

Bus routes 311, 324 and 325 have a direct connection to Barangaroo Reserve from Town Hall, Walsh Bay and Millers Point.

3. Ferry:
Travelling by ferry is an excellent option too, with a couple of ferry wharves close by, such as King St Wharf and Barangaroo Wharf.

4. Car:
Barangaroo Reserve has an underground car park that is open seven days per week from 6 AM until midnight.

The Barangaroo area used to be part of the territory of the Gadigal people, the original inhabitants of Sydney.

The area was an important hunting and fishing region for the local Aboriginal people.

In the first half of the 19th century, Sydney developed into a major port, with many wharves built along the city shore where Barangaroo is located today.

At the beginning of the 20th century, the NSW Government took control of the area, rebuilding the wharves as trade intensified.

In the second half of the 20th century, Sydney became increasingly less suitable as a modern and sustainable port facility. Ships were getting larger, and Sydney’s freight rail infrastructure could not cope with the increased demand.

With the construction of Port Botany as the new major port in Sydney, the Barangaroo and Darling Harbour precincts became redundant as industrial shipping sites.

In 2003, the NSW government decided to redevelop Barangaroo and organised an international design competition to generate ideas and concepts.

One of the government’s demands was that Barangaroo had to incorporate the 12 km public foreshore walkway from Woolloomooloo to Anzac Bridge. This walkway officially opened in 2021 as a beautiful continuous walking track.

In 2007, the area was officially named Barangaroo, after a Cammeraygal woman who was an important figure in the Sydney Aboriginal community at the time of early white settlement.

Barangaroo is still expanding, but the Reserve at the northern end of the Barangaroo area has been open to the public since August 2015.

The opening was quite an important event because the area had been closed to the public for more than 100 years.

Today, Barangaroo Reserve is widely considered to be a fantastic green addition to the city of Sydney, and is a popular destination for locals as well as for tourists.

The Barangaroo Foreshore Walk, otherwise simply referred to as the Barangaroo Walk, is a 1.5 km shared walking and cycling path between King Street Wharf and the north-eastern tip of Barangaroo Reserve.

Also named the Wulugul Walk, this continuous path follows the reclaimed shoreline from 1836. Wulugul is the local indigenous word for kingfish, a popular catch in this area back in the day.

The walk was completed in 2021, when the last remaining section, between the new casino and the southern end of Barangaroo Reserve, was opened.

One thing you will notice when you do this walk the first time is the wide paths, which makes for very comfortable and safe walking.

The best way to get to the starting point of the Barangaroo Walk is by walking from Wynyard station to Barangaroo via the underground pedestrian link.

With the completion of the Barangaroo Foreshore Walk, it is now also possible to walk from the Anzac Bridge to Woolloomooloo along the shoreline.

This 12 km long adventure is one of Sydney’s best Harbour walks, and is an excellent way to see the best of the Harbour as well as the city.

After years of design and development, Barangaroo Reserve is now a 6-hectares waterfront park with a large man-made hill right in the middle.

It is home to over 75,000 planted trees, palms, ferns, shrubs and other plants. Interestingly, all the different species are native to the Sydney region.

The first impression of the park is quite overwhelming, with so many beautifully designed terraced gardens and various walking paths.

And the abundant use of sandstone fits perfectly in the overall design and architecture of the park.

The reserve consists of several walking paths spread over multiple levels. As such, there is no set start and end point, so you can just wander around and enjoy the beautiful surroundings and Harbour views.

To move between the different levels, you can either use the lift at The Cutaway (see below), or otherwise use the many different sets of stairs at various locations.

The views from Barangaroo Reserve are absolutely fantastic, with Goat Island, the Harbour Bridge, Balls Head Reserve, Pyrmont, and various other landmarks and destinations clearly visible.

What’s great is that Barangaroo Reserve has introduced 18 official new place and road names, with 40% of these names referencing Aboriginal culture or people.

Beneath the hill that forms Barangaroo Reserve is an interesting venue named “The Cutaway”.

This engineering masterpiece has a roof constructed like a bridge and a massive sandstone wall that opens up to the sky.

The Cutaway is a unique cultural venue hosting all sorts of events, such as art exhibitions and food events, throughout the year.

Places to Visit Nearby

With Barangaroo, Cockle Bay, Darling Harbour, The Rocks and Circular Quay just around the corner, a visit to Barangaroo Reserve can easily be turned into a full day out.

What’s great is that all these destinations are within walking distance and easily accessible via the Harbour foreshore walking path.