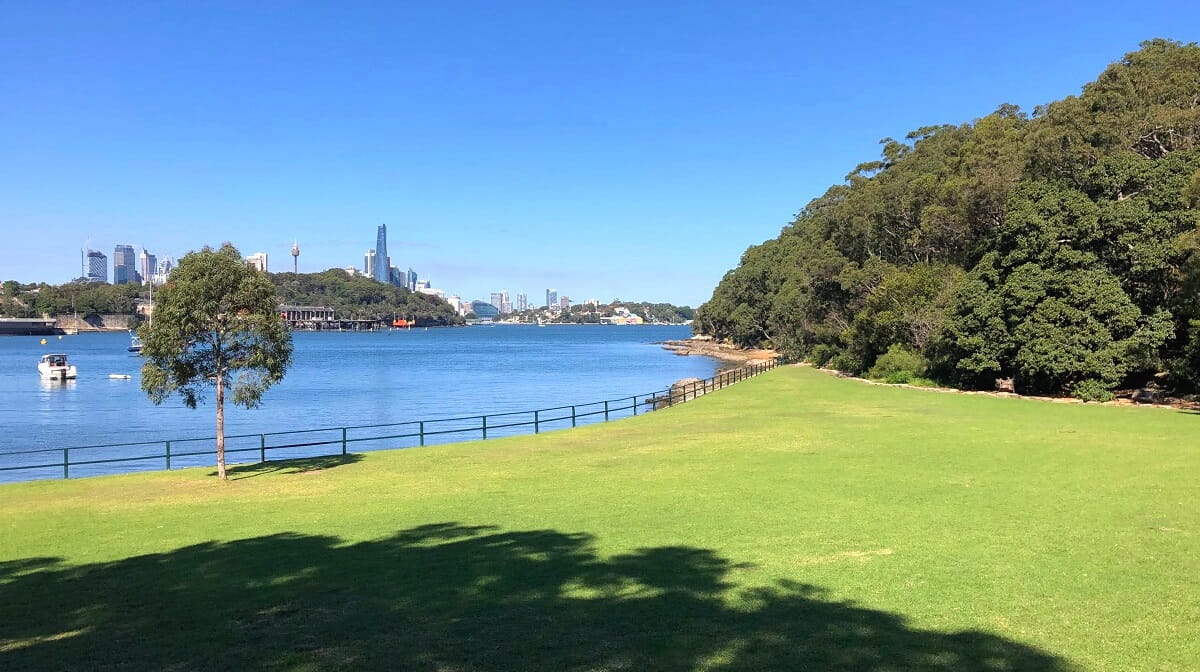 The bushwalk, known as the Gadyan Track, is the perfect way to experience the beauty and serenity of this unique spot located only a stone’s throw away from the city.

Keep reading to learn more about the history behind Berry Island, how best to get there, and where to park your car.

Berry Island Reserve is very easily accessible, by car as well as by public transport.

The reserve is located at the very end of Shirley Road in Wollstonecraft. Free street parking is available on this road, or otherwise a bit further away.

The Wollstonecraft train station is located about 0.5 km north of the reserve.

Catch a train from Wynyard in the city directly to Wollstonecraft station and walk along Shirley Road all the way to Berry Island Reserve.

Now a peninsula, Berry Island used to be one of Sydney Harbour’s islands. It is connected to the mainland of Wollstonecraft by a man-made grassy area.

In the early 19th century, Berry Island became part of a large land grant made by Governor Macquarie to Alexander Berry and Edward Wollstonecraft, an Australian business partnership.

In 1926, along with Balls Head Reserve, Berry Island was dedicated as a nature reserve for public recreation.

Initially attached to the mainland by a small stone causeway over mud flats, in the 1960s, the causeway was transformed into a large grassed area created with relocated soil and other materials.

Berry Island Reserve is now a pleasant recreational spot with BBQs, picnic areas, a fenced playground, a large grassy area, a short circular walking track, and even a small beach.

Dogs are more than welcome in the reserve, but they must be on a leash.

The short but fascinating Gadyan Track is a 750 m circular walk that loops its way around Berry Island.

The starting point of the track is clearly marked with a large signpost and information board with interesting background information about the walk, the island and its significance to Aboriginal people.

Berry Island, along with other spots along the Harbour shoreline, was important to Aboriginal people as there was plenty of fish and shellfish to eat.

In addition, the various sandstone overhangs provided much-needed shelter against cold temperatures and shade against the hot sun.

Gadyan is a local Aboriginal (Cammeraygal) word for the Sydney cockle, a shellfish common in and around the island.

The short walking track guides visitors along several rock engravings and shell middens. One particular engraving stands out as one of the biggest engravings ever found in Sydney.

As you start the walking track, one of the first things you’ll notice is the large oil tanks in Greenwich on the other side of the bay.

Now operated by Viva Energy, the Gore Bay Terminal has been an important fuel import and storage facility since 1901.

The tanks are a bit of an eyesore, but the terminal is still an essential part of the fuel supply chain in New South Wales, supplying fuel to the Sydney cruise and maritime industries.

The highlight of the walk is a large Aboriginal engraving on a flat rock surface.

The well-preserved engraving resembles a 10-metre large creature with a boomerang shape near the tail and a large circle shape in the centre.

Next to the engraving is a small yet deep rock pool and two shallow grooves.

As noted on the information board, it is believed that the pool functioned as freshwater storage and the grooves are a result of grinding the edges of stone axes to sharpen them.

A short side track leads to a small wooden lookout point at the southernmost point of the Berry Island peninsula.

It’s a fun and unpretentious lookout with scenic views of Greenwich in the west, Waverton and Balls Head Reserve in the east, and Barangaroo Reserve in the south straight ahead of you.