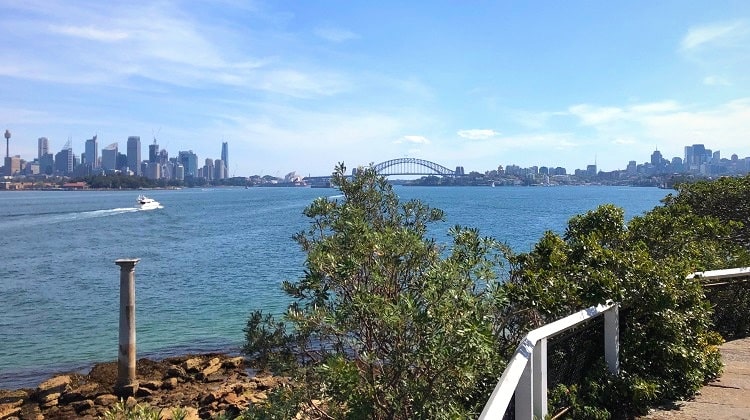 This trail is part of the longer Taronga Zoo to Balmoral Beach walk, which is one of Sydney’s finest Harbour walking tracks.

Read on, to find out more about the history behind Bradleys Head, and to discover the highlights of the walking track to Chowder Bay.

Paid parking is available at Bradleys Head (via Bradleys Head Road), although the parking area is quite small and fills up rather quickly, especially on the weekends.

You can also catch a ferry to Taronga Zoo from Circular Quay, and walk south to Bradleys Head, which isn’t too far away. Simply follow the walking trail past Athol Bay and Athol Beach to Bradleys Head.

Travelling by bus is also a good option, with regular bus services going from Wynyard to the Taronga Zoo and Bradleys Head area.

Alternatively, if you wish to start this walk from Chowder Bay, there is plenty of paid parking available on Chowder Bay Road, which also has bus stops nearby.

Here is a map of the walk from Bradleys Head to Chowder Bay:

But before we discuss the highlights of the walk, let’s first find out why Bradleys Head is such a special place in Sydney Harbour National Park.

Named after William Bradley, a Royal Navy officer who participated in the First Fleet to Australia, Bradleys Head is quite a fascinating place to visit.

The first thing you will notice is the huge mast that stands tall and proud on the tip of the headland, overlooking Sydney Harbour.

The mast was the foremast of HMAS Sydney, a light cruiser that was broken up on Cockatoo Island in 1929.

The amphitheatre at Bradleys Head is a popular fishing and picnic spot within the Sydney Harbour National Park.

This man-made amphitheatre is a great lookout for the best views of the city skyline, the Sydney Opera House, and the Sydney Harbour Bridge.

With million-dollar views, the amphitheatre is widely regarded as one of Sydney’s best outdoor wedding locations.

Bookings can be made via National Parks for both the Bradleys Head Amphitheatre and Athol Hall for the reception.

The complex, built in the 19th century, was part of the larger Sydney Harbour defence system, meant to protect New South Wales (and its wealth) from invaders. There are also remnants of convict-built artillery batteries.

Bradleys Head features a small lighthouse that was built in 1905 and is still active today.

The lighthouse, closed to the public, is located just in front of Bradleys Head, connected to the shore by a small footbridge.

Next to the big mast is the start of the Bradleys Head Memorial Walk, which flows into the walking trail to Chowder Bay.

This short avenue commemorates the loss of 22 commissioned Royal Australian Navy ships and submarines, each represented by a little plaque.

The walk is well sign-posted, and once you arrive at Bradleys Head (or Chowder Bay), you should be able to easily identify the start of the track.

If you’re starting in Bradleys Head, follow the trail into the bush heading towards Taylors Bay. Simply look for the big signpost which marks the start of the walk.

The trail soon evolves into a real bushwalk, surrounded by native trees, like eucalyptus and ferns, and lots of wildlife, such as birds and lizards. There’s also even a little waterfall along the way.

After a few hundred metres you will see a sign pointing left to Athol Hall Cafe and Function Centre, which is a lovely place for morning or afternoon tea.

The heritage building is more than 150 years old and is surrounded by grassy areas and picnic grounds. It’s definitely worth having a look before moving on to Taylors Bay.

As you continue, the track circles around Taylors Bay, offering great views of this picturesque bay with usually a few small boats anchored. There is a short sidetrack that goes down to the bay as well.

From Taylors Bay, the track continues to Clifton Gardens and Chowder Bay via the Chowder Head peninsula.

Chowder Head has a great vantage point from where you can enjoy nice views of the Harbour, including South Head, Rose Bay, Shark Island and also Bradleys Head.

The trail continues to Clifton Gardens Reserve, which has been a popular picnic spot for families since the 19th century.

The area is now home to a rocky beach with netted swimming enclosure, a fenced playground, change rooms, and excellent BBQ and picnic facilities.

The track follows the little promenade along Clifton Gardens beach until it reaches Chowder Bay, which is a great place to relax with a coffee and a meal at one of the little cafes.

If you’re up for a pricier dining experience, have a look at Ripples Chowder Bay, a nice restaurant with views and food that are both top-notch.

The Bradleys Head To Chowder Bay walking trail is a great way to explore the beauty of Sydney Harbour. The wildlife and natural bushland are very much thriving in this part of Sydney and add to the experience.

As mentioned, this trail is a section of a longer walking track that starts at Taronga Zoo and continues to Chowder Bay and Balmoral Beach.

It’s possible to make the walking track even longer by starting from Sirius Cove Reserve, and then follow the trail past Little Sirius Point and Whiting Beach to the Taronga Zoo ferry wharf.

At the other end, in Balmoral Beach, you can continue hiking to Chinamans Beach, and on to the Spit Bridge via some suburban streets.