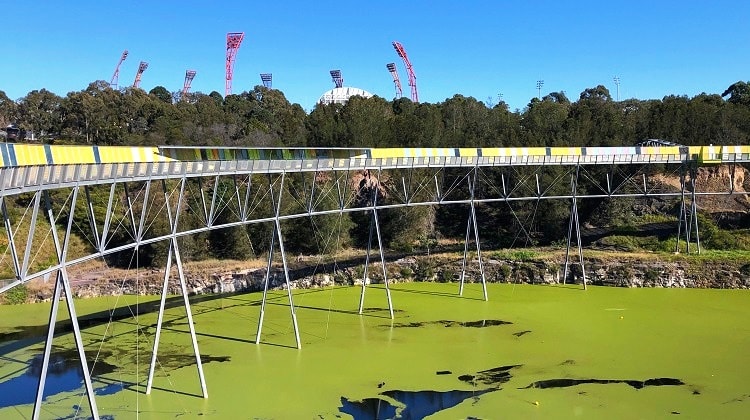 The Brickpit Ring Walk is a fun and educational tourist attraction in Sydney Olympic Park, situated high above a large pond where once a flourishing brickyard was.

This unique circular walkway structure allows visitors to view the pond beneath, which now functions as a protected habitat for endangered frogs and other wildlife.

The Brickpit Ring is located in the centre of Sydney Olympic Park, next door to the Sydney Showground Stadium.

There are two entry points to the Brickpit Ring. The first one is on Australia Avenue (map), and the second one is on Marjorie Jackson Parkway (map).

Both these entry points have dedicated parking areas. Parking is mostly free (with a time limit), but make sure to check the signage.

Travelling by train is of course also a good option. The Sydney Olympic Park train station is only a few hundred meters from the Brickpit Ring, with lots of cafes and restaurants nearby should you get hungry after exploring the Brickpit Ring.

Keen to discover more of these gems like the Brickpit Ring? Check out our list of beautiful hidden places in Sydney for some great ideas!

About the Brickpit Ring Walk

The Brickpit Ring Walk is much more than just a short walk with lovely views.

Apart from the fact that it’s an architecturally impressive structure, it also has quite a rich history.

The Brickpit Ring was named after the State Brickworks, a Homebush based company established in 1911 by the New South Wales government to meet the increasing demand for public housing.

Until then, the private Metropolitan Brick Company had monopolistic control of Sydney’s brickyards, and with the establishment of the State Brickworks the government was able to cut public construction costs significantly.

State Bricks initially flourished in the 1920’s driven by strong urban growth, but slumped during the Depression years from 1929 until 1933.

Following this downturn, the company was sold in 1936 to a group of private brickyards, and the Brickpit eventually closed.

During the Second World War, the site was used as an ammunition depot by the Navy, and reclaimed by the state government after the war. The Brickpit was then restored to keep up with the housing boom of the 1950’s.

This boom lasted until the 1980’s, and the State Brickworks closed for good in 1988. The nearby State Abattoirs met the same fate, closing down in the same year.

This marked the end of strong industrial activity in the Homebush and Rhodes area, and the beginning of a decades long redevelopment process.

It is estimated that 3 billion bricks were produced at the Brickpit during the 60 years of its existence, with many Sydney houses built with bricks coming out of Homebush.

In preparation for the 2000 Sydney Olympic and Paralympic Games, various ideas for the redevelopment of the old Brickpit site were put forward.

But lo and behold, Green and Golden Bell Frogs were discovered at the site, and all plans to redevelop the site into an Olympic venue were halted. Instead, the site was transformed into a water storage and frog habitat.

And in 2005, the Brickpit Ring Walk above the pond was constructed as a tourist attraction, allowing visitors to experience the current and historic use of the site.

What makes the walk so interesting and educational are the various multimedia exhibits, that explain more about the history of the brickworks site and about Sydney’s once flourishing brick industry in general.

Lots can also be learned about the endangered Green and Golden Bell Frog, and other wildlife species that now call the pond below the structure their home.

There are two entry points to the Brickpit Ring Walk, both with parking lots available. The first one is located on Marjorie Jackson Parkway (1), and the second on Australia Avenue (2).

The train station is located only a few hundred meters south of the ring, which makes for a pleasant walk in itself.