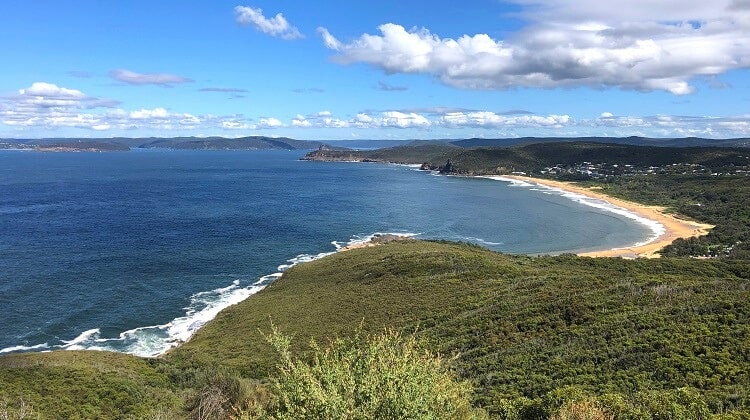 The Bullimah Spur Track is a short but enjoyable and scenic bush walking trail in Bouddi National Park that leads to a beautiful lookout.

It’s a relatively easy walk starting from the Maitland Bay Information Centre, suitable for all ages and fitness levels, with more walks and lookouts nearby to make a day of it.

Read on to find out more about this adventurous hike, its highlights, how to get there, and where best to park your car.

The Bullimah Spur Track is located in the southern part of the Central Coast, a 90 minutes drive from the Sydney CBD.

Parking for this walking track is available at the Maitland Bay Information Centre located at the intersection of Maitland Bay Drive and The Scenic Road in Killcare Heights (see map location).

The easiest way to get there from the M1 Motorway is via Woy Woy Road to Woy Woy, followed by Empire Bay Drive in Empire Bay, and Maitland Bay Drive to the Information Centre.

As mentioned, this 2.4 km return walking track is relatively easy, but it does include sections with uneven surface and a bit of rock scrambling.

It’s a walk that is suitable for all ages, but if you bring children with you, do keep an eye on them, particularly at the unfenced lookouts.

Below is a map of this walk, starting from the Maitland Bay Information Centre and finishing at the Bullimah Outlook.

Once you’ve parked your car, it’s time to start this exciting walk. Look for the Bouddi National Park, Maitland Bay signpost, and head straight into the bush from there.

The first few hundred metres is part of the Maitland Bay Track, but then the Bullimah Spur Track branches off to the right at the signposted junction.

From that junction, the walking track heads south along the hillside, away from Maitland Bay.

After conquering a few large boulders, the walking path meanders through a beautiful forest of gum trees.

The trail then continues along the ridge through scenic bushland towards the sea on an easy to follow and reasonably flat path.

Approximately 1 km into the walk, you will notice a couple of sandstone outcrops left of the walking path.

It’s worth exploring these rocky landings a bit more, because the views from those spots of Maitland Bay and beyond are absolutely stunning.

The trail continues down the ridge until it finally arrives at the Bullimah Outlook, a fantastic lookout point that offers incredible views to the east and to the south.

Putty Beach looks incredible from up high, but if you look beyond the beach, you may be able to identify Box Head, Broken Bay, and even the Palm Beach peninsula.

The Bullimah Outlook marks the end of the Bullimah Spur Track. Or does it?

There is in fact a way to climb down the cliff, reaching the Bouddi Coastal Walk and Bullimah Beach. This adventure would mean completing a steep descent with some rock scrambling involved. This seems to be a risky adventure, and we don’t recommend it unless you’re an experienced and fit hiker.

There are a couple of easier and safer ways to reach Bullimah Beach and the Bouddi Coastal Walk:

Have a look at our list of Bouddi National Park walks for more great hiking ideas in this beautiful area north of Sydney.