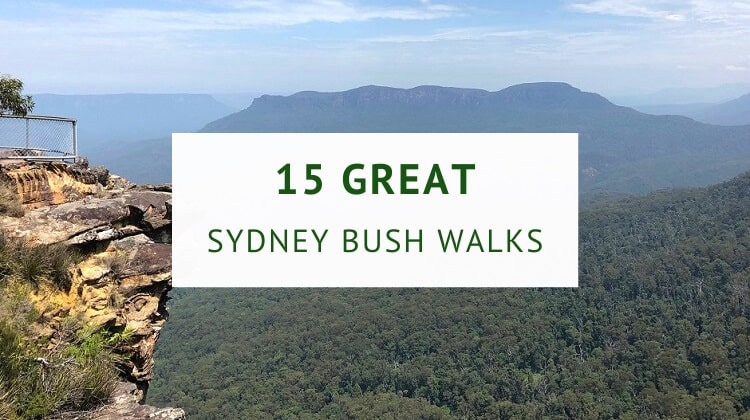 Keen to head into the Sydney bush to go hiking? We have listed 15 of the best bushwalks in Sydney, some short and easy and others much more challenging and adventurous.

Sydney is well known for its beautiful coastline, but Australia’s biggest city is also home to some of the best bushwalking tracks. What’s great is that you don’t have to go far away from the city to enjoy scenic bushland.

While the Blue Mountains out west and the Royal National Park south of the city have some fantastic bushwalks, there is also lots of bushland to explore in and around the city and the Harbour.

Read on, as we reveal our top 15 bushwalks in and around Sydney, where you can enjoy beautiful natural scenery whilst also getting a good workout in.

Ordered by distance from short to long, pick your favourite hike from the following list of the 15 best bushwalks in Sydney.

The Winifred Falls trail is a short bushwalk that leads to a pretty waterfall on the South West Arm Creek. The area surrounding the waterfall is great for having a picnic, and the creek is nice for a swim on warmer days.

The first part of the trail is an easy 10 minutes flat walk before it turns into a bushwalk with steep sections, surrounded by banksia plants and gum trees.

You can get the best views and photos of the waterfall if you walk a bit further downstream around the pool. There are several rock platforms above and around the waterfall where you can relax and take in the beauty of this spot in the Royal National Park.

The trail doesn’t have to end at Winifred Falls. The South West Arm Pool is about 300m further away downstream, great for swimming in the summer months. You can also continue the Winifred Falls trail in the other direction, with a couple of small waterfalls to take in.

If you’re looking for a great little bushwalk that is close to the city, Balls Head Reserve is where you need to go. Overlooking Sydney Harbour, this reserve is a true bushland oasis located quite literally next to the city.

Boasting 9 hectares of scenic bushland, Balls Head Reserve is home to various bushwalking trails that are all connected. Exploring the reserve is a family-friendly adventure, with great views of Sydney Harbour, the CBD skyline, the Harbour Bridge, Goat Island, and nearby peninsulas.

Along with nearby Berry Island, Balls Head Reserve was declared public parkland almost a century ago. Now managed by North Sydney Council, the Reserve is a beautiful place to wander around.

When visiting Balls Head Reserve, it’s recommended to also visit Carradah Park. Overlooking Berrys Bay, this scenic park was once the location of a major oil storage facility, with remnants of this industrial use incorporated into the parkland design.

The America Bay Track is a short but highly enjoyable bushwalk in Ku-ring-gai Chase National Park. It’s only 1 km one way, but it sure packs a punch.

The walk starts with a short detour to a site with well-preserved Aboriginal engravings on a large and flat rocky area.

But the highlight of this scenic walk is the lookout facing America Bay at the very end of the track. The views from this lookout are some of the best in the national park.

If you’re looking for a quick and easy bushwalking escape in beautiful natural surroundings, the America Bay Track will not disappoint.

The 4 km long Blue Gum Walk in Hornsby is a bushwalk that explores different landscapes and environments, characterised by high gum trees and beautiful green ferns.

This moderately challenging but family-friendly walking track is a true bushwalker’s delight, taking in creek crossings, gum forests, valley views, and much more.

One of the highlights along this walk is the Fishponds, a series of scenic waterholes on Berowra Creek.

Since the Blue Gum Walk is a loop walk, there are multiple entry and exit points. However, the most logical starting point of this walking track is at the Rosemead Road picnic area in Hornsby.

Hiking in Lake Parramatta Reserve makes for a great day out, as you walk through 75ha of bushland around a scenic lake created by a historic dam that is now decommissioned.

Lake Parramatta was created as a result of the damming of Hunts Creek in 1856. The lake is now a recreational area with three marked bush walking trails.

The longest of these trails is the full circuit walk that loops around the entire lake. The other two walks are much shorter and easier to do.

The circuit trail around the lake is moderately challenging, but can be completed by anyone with a reasonable fitness level.

The Forest Path is a scenic and unpretentious bushwalk along Hacking River in Royal National Park.

It’s a relatively easy 4.5 km trail with start and finish on Sir Bertram Stevens Drive in the southern section of the national park.

This walk first opened in 1887 to allow for easy access to the forest trees to accommodate logging in the area.

Public pressure ultimately led to the ban of logging in the 1920s, and the Forest Path has since been used for recreational purposes only.

One of the most popular and also most challenging walks in the Wentworth Falls area in the Blue Mountains is the Wentworth Pass walking track. It’s a beautiful 5 km circuit walk that starts and ends at the Conservation Hut.

From the Conservation Hut, the Wentworth Pass walking track passes through a section of the Valley of the Waters via Empress Falls.

From there, the Wentworth Pass continues through the valley, before climbing up the Slack Stairs at the actual Wentworth Falls waterfall. From the waterfall, the track continues to the top of the waterfall via the Grand Stairway.

The 5.5 km return walk to the Bluff Lookout from Seaforth Oval in Garigal National Park is a challenging bushwalking adventure with panoramic views of Bantry Bay.

The first part of the trail is an easy descent towards the bay, followed by a scenic walk along the shoreline.

The track then soon makes a steep ascent towards the Bluff Lookout, from where you can enjoy fantastic views of the bay, Middle Harbour, and Sydney’s skyline.

Even though this walking track is relatively short, it is pretty challenging because of the climbs and sections with a rough surface, but overall it’s a highly enjoyable bush walk.

Resolute Beach in Ku-ring-gai Chase National Park is one of those secluded beaches in Sydney that you should visit at least once in your life.

This is a true hidden gem with amazing views of Pittwater and the Barrenjoey Headland, beautiful emerald green water, and usually very few tourists.

The 6 km Resolute circuit walk is an exciting bush walking track that leads to Resolute Beach via the Resolute Picnic Ground.

The Blue Mountains is home to a great number of walking tracks, but perhaps the most impressive one is the historic Grand Canyon Walk.

Officially opened in 1907, the 6 km long Grand Canyon walking track was the first of its kind and has since been challenged by thousands of bushwalkers each year. The trail meanders through lush rainforest, with several creek crossings and small waterfalls to take in.

While the track has some very steep sections, the Grand Canyon Walk can be undertaken by anyone with a reasonable level of fitness, but definitely bring a bottle of water with you.

The cooler temperatures in the valley make this trail a pleasant adventure all year round, including the warmer summer months.

Surrounded by 377 hectares of bushland, Manly Dam Reserve is the largest freshwater lake in Sydney. The lake was created as a result of the damming of Curl Curl Creek to create a water supply for the local area.

The pleasant bushwalking trail around Manly Dam is a 7.3 km circuit track with panoramic views of the dam and the large lake.

Manly Dam Reserve is now a popular recreational area, with lots of activities in and around the lake, such as hiking, mountain biking, swimming, picnicking, and water skiing.

Although the circuit walk is rather long, it certainly isn’t a difficult hike at all. However, there are some steeper sections and some areas where the surface is rough with lots of loose rocks.

Completed in February 2015, this track is now a popular weekend escape for walkers, joggers and cyclists, enjoying the natural beauty and serenity of this idyllic lake surrounded by thriving bushland.

Narrabeen Lakes is also referred to as Narrabeen Lagoon because the lake is essentially a coastal lagoon, separated from the sea on the other side of Ocean Street.

The area around the lagoon has been a popular camping and leisure spot since the beginning of the 19th century, when the tram line was extended to Narrabeen, making transport to the area so much easier.

The perfect example of a great bushwalk close to the city is the Lane Cove Riverside circuit walk. Located only 20 minutes north-west of the Sydney CBD, Lane Cove National Park is a large pocket of scenic bushland surrounding the banks of the Lane Cove River.

A scenic and enjoyable 10 km circuit bushwalk along both sides of the river makes for an excellent way to explore the natural beauty of this unique national park.

Popular with walkers, joggers and cyclists, Sydney’s metropolitan Lane Cove National Park extends from Pennant Hills in the north to East Ryde in the south.

This central part of the national park is home to the Riverside Walking Track and the Lane Cove Valley Walk, which is part of the Great North Walk. These two bushwalking tracks combined from a moderately challenging 10 km circuit walk.

While Bobbin Head is a beautiful destination in itself, it’s also a starting point for some great bushwalks in the area.

One of these bushwalks is a 10 km circuit walk that consists of the Bobbin Head track, the Sphinx track, and the Warrimoo track.

This walk starts behind the Empire Marina, clearly signposted as the Warrimoo and Bobbin Head track. You can choose to go clockwise or anti-clockwise, which ultimately doesn’t make much difference.

The Warrimoo track follows the western shoreline of Cowan Creek through thick mangroves, with several remnants of Aboriginal middens to be explored.

Created by a returned soldier in the 1920’s, the Sphinx Memorial along the Sphinx track is a sandstone monument created in memory of lives lost in WWI. It’s an unusual yet fascinating structure in an unlikely spot.

15. Cowan to Brooklyn via Jerusalem Bay

The challenging bushwalk from Cowan train station to Brooklyn via Jerusalem Bay through stunningly beautiful scenery is a real bushwalking challenge.

From Cowan train station, you have the option to hike to Brooklyn, which is 13 km, or only do the short return hike to Jerusalem Bay, which is much easier.

The bushwalk between Cowan and Brooklyn is part of the Great North Walk, an iconic 250 km track between Sydney, Hunter Valley and Newcastle. This 13 km section is very challenging but well worth the effort.

The best way to get to Cowan is to use public transport, as the start of the walking track is opposite the train station. Follow the signs for Brooklyn and the Great North Walk to find the start of the track. Once in Brooklyn, you can catch the train back to Cowan.