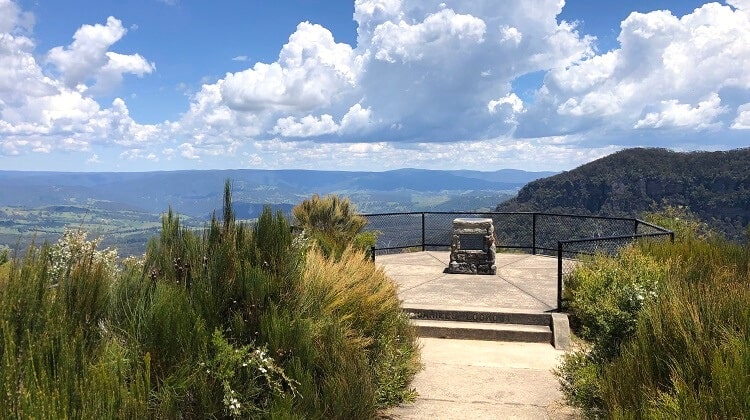 Overlooking the Megalong Valley, Cahill’s Lookout is one of the most impressive lookouts in the Blue Mountains, but without the big tourist crowds.

Quietly tucked away on the westernmost point of Cliff Drive, the lookout offers breathtaking views of the valley, Megalong Head, Boars Head Rock and the Narrow Neck Peninsula.

A paved 500 metres long walking path leads to this lookout with multiple viewing platforms to explore.

Continue on past Katoomba Cascades, Scenic World and Narrow Neck Lookout. Make a left turn into a smaller road that continues as Cliff Drive before the main road changes into Narrow Neck Road.

The walking track to the lookout is only a few hundred metres away from this intersection. There is a small car park at the start of the walking track, with additional free street parking available nearby (see map location).

If you’re driving in from Blackheath, turn into Bathurst Road from the Great Western Highway. Turn right into Valley Road which evolves into Narrow Neck Road. Turn right into Cliff Drive and follow until you get to the car park.

The official address of Cahill’s Lookout:

The Cahill’s Lookout was named after John Joseph Cahill, Labor Party Premier of New South Wales in the 1950s who was responsible for the commissioning of the Sydney Opera House and construction of the Cahill Expressway.

A short and pleasant 500 metres short walking path brings visitors to this beautiful lookout, which consists of one large viewing platform and two smaller ones on the side.

The walk also passes the Boars Head Lookout, from where you can enjoy views of a unique rock formation that resembles, you guessed it, a boar’s head. And it actually does, with a healthy dose of imagination.

There are two things that make Cahill’s Lookout unique compared to most other lookout points in the area.

Firstly, even though this lookout is one of the prettiest in the Blue Mountains, the big crowds haven’t yet discovered this magnificent spot. That’s a good thing because it allows visitors to really enjoy the serenity of the area.

Secondly, unlike lookouts such as Echo Point and Lincoln’s Rock that overlook the Jamison Valley, Cahill’s Lookout faces the Megalong Valley, which offers a much different scenery.

The Narrow Neck Peninsula, clearly visible from the viewing platform, is the plateau in the middle that divides the two large valleys.

Besides the major tourist attractions in the Katoomba area, there are a few other interesting sights and walking tracks close to Cahill’s Lookout that are worth visiting.

About a hundred metres away from the entrance to the Cahill’s Lookout is the starting point of a short walking track to Boars Head Rock.

Look for a small sign that says Boars Head climbing area. This is a popular spot for abseiling and rock climbing, where climbers can descend up to 200 metres into Megalong Valley.

Do note though that there is no fencing around Boars Head, so it’s strongly recommended to stay well away from the cliff edge.

The Narrow Neck Lookout offers scenic views of the Narrow Neck Peninsula, a large plateau that separates the Megalong Valley from the Jamison Valley.

Only a short drive away from Cahill’s Lookout, along Cliff Drive, the Narrow Neck lookout point is located right in front of the peninsula.

Starting at the iconic Golden Stairs, the Ruined Castle Walk is an exciting bushwalking track to one of the most unique landmarks in the greater Blue Mountains region.

The Ruined Castle is in fact visible from Cahill’s Lookout, situated right in the middle between Narrow Neck’s Castle Head and Mount Solitary.

To get to the starting point of this walking track, turn into Glenraphael Drive from Cliff Drive, just past Narrow Neck Lookout.