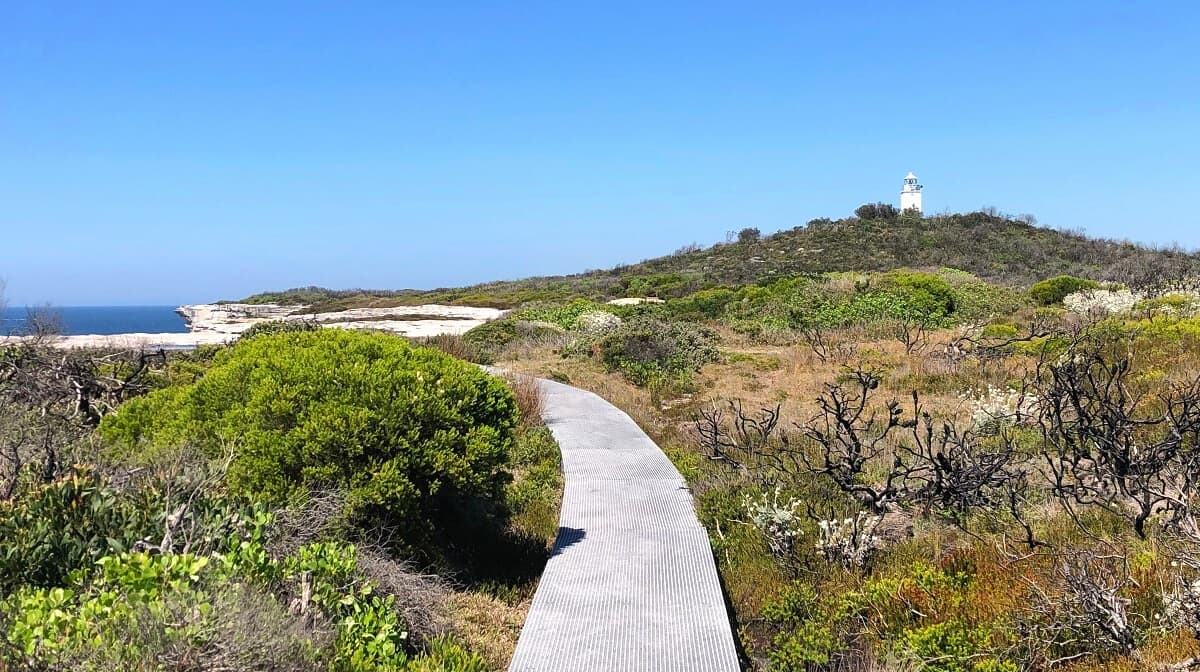 The Cape Baily Track in Kamay Botany Bay National Park is a scenic coastal walk between Cape Solander and the Cape Baily Lighthouse.

The ocean and cliff views are stunning from start to finish, so much so that we have included this walk in our list of the best coastal walks in Sydney.

What’s great about this hike is that it doesn’t attract big crowds like other popular coastal walks in Sydney, but the scenery is just as beautiful.

The starting point of the Cape Baily Track is at the Cape Solander Lookout in Kamay Botany Bay National Park, just north of Cronulla.

To get there, follow Captain Cook Drive around Greenhills Beach and the Cronulla Sand Dunes. Once in Kurnell, drive into the National Park via Cape Solander Drive which leads directly to the lookout (see map location).

Note that entrance to the park is $8 per vehicle per day, to be paid at one of the ticket machines at the lookout.

Alternatively, you can also start this walk from Polo Street in Kurnell (see map location). This means you can park your car just outside the national park and you won’t have to pay the entrance fee.

In the below map, this spot is marked as P2, with P1 referring to car park at the Cape Solander lookout. If you do decide to park on Polo Street, you’re going to add an extra 2 km (return) to this walk.

Below is a picture of the entrance to Kamay Botany Bay National Park at the end of Polo Street in Kurnell.

From there, simply follow the trail to Cape Solander, where you can commence the walking track to the Cape Baily Lighthouse.

The track to the Cape Baily Lighthouse follows the rugged shoreline of the National Park, with large sections on well-maintained boardwalks.

It’s quite an easy track, suitable for all ages and fitness levels, but good hiking shoes are recommended because the surface can be uneven and slippery at times.

The start of the Cape Baily Track is signposted at the small roundabout at the end of Cape Solander Drive.

Make your way onto the boardwalk, where you can start this fantastic walking trail that goes all the way to the lighthouse.

The coastal and cliff views are breathtaking, similar to the scenery along the coast in the Royal National Park.

An interesting highlight before arriving at the lighthouse is Tabbigai Gap.

It’s hard to imagine when looking at the cliffs of Tabbigai Gap, but this is where a small community of people actually lived between the 1920s and 1960s.

Also called the Tabbigai Cliff Dwellers, they built their own houses on the cliffs following the economic depression years in the 1920s.

Some of these homes were quite sophisticated, with bedrooms, kitchens, water tanks, and even showers and toilets. The houses were connected, and accessible via footpaths and steps cut into rocks.

Eventually, the Department of Lands ordered all residents occupying Crown Land on the Kurnell Peninsula to vacate their homes on the cliffs.

As you continue the trail, you will see the first glimpses of the Cape Baily Lighthouse standing on top of the hill.

The last section of the walking trail is the steep bit that goes straight up the hill to the lighthouse. You can see glimpses of the Sydney city skyline along this path.

The Cape Baily Lighthouse is not a super impressive lighthouse by any means, but it’s still interesting to see this structure from close by.

Cape Baily Light, as this lighthouse is officially called, is an active lighthouse that helps north-bound ships navigate the coast to avoid the strong currents further out in the ocean.

It was built in 1950 and has a rather unusual, or even uninspiring, design. It’s an unmanned square-shaped concrete tower with a solar-powered lantern on top.

And that marks the end of the Cape Baily Track! If you feel like more hiking, the trail actually continues around the peninsula all the way to Cronulla.