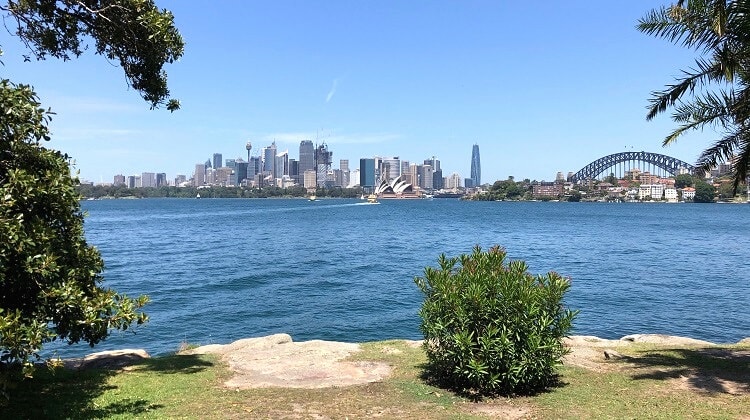 Discover Robertsons Point Lighthouse, Cremorne Reserve and the MacCallum swimming pool, as you wander past picturesque gardens and impressive old mansions, only a short ferry trip away from Circular Quay.

Street parking is available in the northern part of Cremorne Point, for example along Bogota Avenue, Hodgson Avenue or Milson Road.

But please, catch a ferry, it’s much more fun! The ferry is by far the best way to get to Cremorne Point. We’ve even included this short ferry trip from Circular Quay in our list of best Sydney Harbour ferry rides.

It’s a short but very scenic trip from Circular Quay to the other side of the Harbour. If you’re planning to visit Cremorne Point on the weekend, you can even take advantage of the $8.15 public transport daily travel cap with your Opal Card.

You can also travel to Cremorne Point by bus, with various routes departing from the city (Wynyard) heading to Sydney’s lower north shore.

Located only 6 km from the Sydney CBD, Cremorne Point is a leafy harbourside suburb in the lower north shore.

It was named after the mid 19th century Cremorne Gardens, a large amusement park that organised entertainment and activities such as live music, dancing, archery, shooting galleries, gymnastics and fireworks.

The best way to explore the beauty of this quiet little peninsula in Sydney Harbour is by doing the circuit walk, an easy walking trail that follows the foreshore of the peninsula (see map further below).

Simply follow the 3 km trail clockwise (or anti-clockwise), and within 90 minutes you will be back at the ferry wharf.

We’re describing the walk in an anti-clockwise manner, along the following highlights and landmarks:

The old ferry wharf at Cremorne Point was struck by disaster in June 2007 when it partially sank during vicious storms.

It reopened in September 2007, but it was decided to build a new, modern wharf to meet the modern safety standards. The new ferry wharf opened for business in February 2015.

There is a little cafe at the wharf, called Sophie’s Place, which has a rather interesting history.

According to Monument Australia, the original owner of the cafe, Sophie Vaillant, used to sell coffee at the wharf in the 1990s with her espresso machine. She turned her little coffee business into a thriving cafe popular with the locals.

In 2009 a plaque was dedicated to Sophie Vaillant and her work after she passed away in November 2008. The inscription reads “she made her cafe a meeting place for our community”. Very thoughtful indeed.

Before starting the circuit trail, it’s recommended to first do a little side trip to Robertsons Point, the southernmost tip of the Cremorne Point peninsula.

Only 30 metres wide, Robertsons Point is an interesting mix of bushland, ornamental gardens, cliffs, and a short walking track.

The walking path that goes through the middle of the headland leads to the Robertsons Point Lighthouse, from where you can enjoy great views of the Harbour and other nearby peninsulas.

The headland is also home to a large playground where locals and visitors can meet, socialise and enjoy outdoor recreation in a great setting, with lots of natural shade provided by the trees.

Robertsons Point was named after James Robertson, the first European settler to own land there in the early 19th century.

James was the father of John Robertson, the 5th Premier of New South Wales.

The Robertson Point Lighthouse was constructed in 1910 and is still active today. It is very similar in appearance to the lighthouse at Bradleys Head, not too far away from Cremorne Point.

You can’t get into the lighthouse, but you can actually get very close by climbing down the small ladder that is attached to the rocks. Please be careful if you’re planning to use this ladder, especially with windy conditions.

This part of the walking track is very scenic, with impressive mansions and beautiful gardens on your left, and scenic views of Mosman Bay on your right.

Keep following the path north, past the Sydney Amateur Sailing Club and the Old Cremorne Wharf, until the path makes a a left-turn, heading up the stairs to Hodgson Avenue.

From there, the circuit walk crosses a few suburban streets, until it ends up at the archway entrance to the western side of Cremorne Point.

This bit through the streets of Cremorne Point isn’t very exciting, and at times you may even feel like you’re going into the wrong direction.

This rather interesting archway entrance is located on Bogota Avenue, and provides access to the walking path on the western side of Cremorne Point facing the waters of Shell Cove.

The first section of this walking path looks and feels a bit like a walk through an urban rainforest, with lots of red gums, Sydney peppermints and Banksias.

As you keep following the trail heading south, the views of Shell Cove become clearer, with the Harbour and the city skyline also appearing in the distance.

A key point of interest on the western side of Cremorne Point is the historic MacCallum swimming pool, where you can swim laps against the backdrop of the Sydney CBD skyline and the Harbour Bridge.

Originally built as a rock pool by Olympic swimmer Fred Lane in the early 20th century, local resident Hugh MacCallum improved and looked after the pool in years to come.

In 1930, the North Sydney Council took ownership of the pool and officially named it the Hugh MacCallum Pool, in recognition of his great work.

The MacCallum pool is free for everyone to enjoy, but it closes regularly for cleaning. If you would like to go for a swim, it’s best to check the North Sydney council website for the cleaning timetable and other practical information.

From the swimming pool, keep following the walking path that will ultimately bring you back to the ferry wharf.

You will find lots of great vantage points along this last stretch of the walk, from where you can enjoy fantastic views of Sydney Harbour, the Sydney Harbour Bridge, and the city skyline.