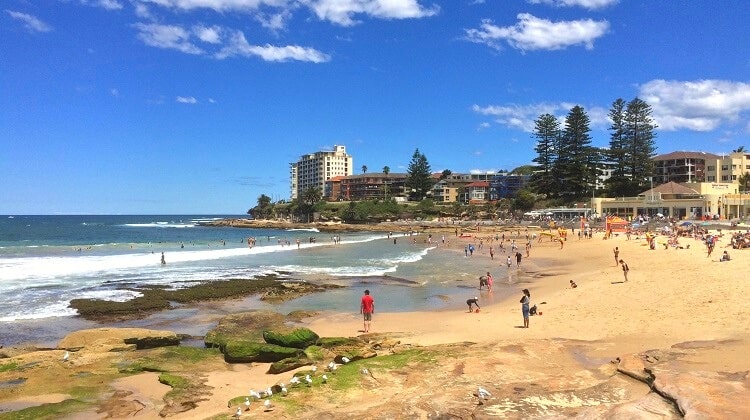 While most people visit Cronulla Beach because of its long beaches, beautiful parks and lively town centre, this beachside suburb is also home to one of Sydney’s prettiest coastal walking tracks.

How to Get to Cronulla Beach

If you’ve been to Cronulla Beach before, you will know that there is lots of (free) parking available at the beaches, between the Wanda SLSC (map) and North Cronulla Beach.

It does fill up quickly on warm summer days though, in which case you can try and find a parking spot in the suburban streets further away from the beach.

What’s great about Cronulla is that it’s one of the very few Sydney beachside suburbs that has its very own train station (on the T4 Eastern Suburbs & Illawarra Line).

It takes less than an hour from Sydney Central, and you will arrive right in the centre of town, only minutes away from Cronulla Park and the main beach.

The below track notes describe the Cronulla Beach walking track starting at the Wanda Beach surf life saving club, along the following highlights:

If you’re travelling by train however, you can of course start this hiking adventure at the train station.

It’s a circuit walk after all, and can be started anywhere.

From the Wanda Beach SLSC head south following the shoreline towards the big lifeguard tower at North Cronulla Beach.

Elouera Beach sits between Wanda and North Cronulla Beach and also has its own surf life saving club, complete with club house and venue hire facilities.

Swimming can be hazardous due to the strong rips that are almost always present, which is why it’s very important to always swim between the flags provided by the North Cronulla SLSC.

The SLSC has an iconic club house situated right behind the beach, next to Dunningham Park, which has a large playground and a few popular cafes and restaurants nearby.

From North Cronulla it’s only a short walk along the shore to South Cronulla Beach, situated in front of Cronulla Park.

Opened in 1932, the two popular ocean rock pools between the two Cronulla beaches are a popular spot for swimming during the summer months.

Cronulla Park is the perfect location for a picnic, with plenty of tables, a large playground and lots of trees that provide shade.

Bring your own food, or otherwise buy some takeaway from one of the many food outlets and cafes nearby.

Starting at Cronulla Beach, The Esplanade is a comfortable foot path that extends all the way to the southernmost tip of the Cronulla Peninsula.

It follows the shoreline to Shelly Beach, Oak Park Beach, and around the corner to Bass and Flinders.

This is where you can enjoy great views of Port Hacking, the Royal National Park, Bundeena, and also Jibbon Beach in the far distance.

Home to a large ocean pool, a fenced playground and BBQ facilities, Shelly Park and Beach is a great spot to have a rest.

Also a popular location for wedding ceremonies, Shelly Park was so named because of the many sea shells that can be found in the area.

A few hundred metres further south is Oak Park, which is also home to a popular ocean pool, the Oak Park Rock Pool, which is similar to the Shelly Beach Ocean Pool.

We liked the Shelly Beach Ocean Pool so much that we have it included in our list of best ocean pools in Sydney.

The trail continues southbound to Bass and Flinders Point, a scenic spot which was named after George Bass and Matthew Flinders.

They were two British explorers who sailed past the headland in 1796 and discovered Port Hacking.

Right next to Bass and Flinders Point is Salmon Haul Reserve at the southernmost tip of the peninsula.

The walking track continues to Hungry Point Reserve, which is worth exploring.

Hungry Point Reserve was opened in 2019 as a public park, and offers scenic views of Port Hacking and Bundeena to the south, and Gunnamatta Bay to the west.

From Hungry Point, the trail continues northbound to Darook Park.

Facing the calm waters of Gunnamatta Bay, Darook Park is home to a popular sheltered beach, away from the ocean waves that exist on the other side of the Cronulla Peninsula.

With low tide it is possible to continue the circuit walk along the sandy foreshore, in front of the beautifully designed homes that face Gunnamatta Bay.

This small and quiet bay forms the natural boundary between the suburbs of Cronulla and Burraneer.

If you haven’t had lunch yet, now is a good time, because the station is located right next to Cronulla’s main strip of cafes, shops and restaurants!

The best place to start the Cronulla Beach Walk is at the Wanda SLSC from where you simply follow the shoreline towards Cronulla Beach and The Esplanade.

If you’re heading to Cronulla by train, you can go southbound and do this walk anti-clockwise, or walk to (North) Cronulla Beach and head south from there.