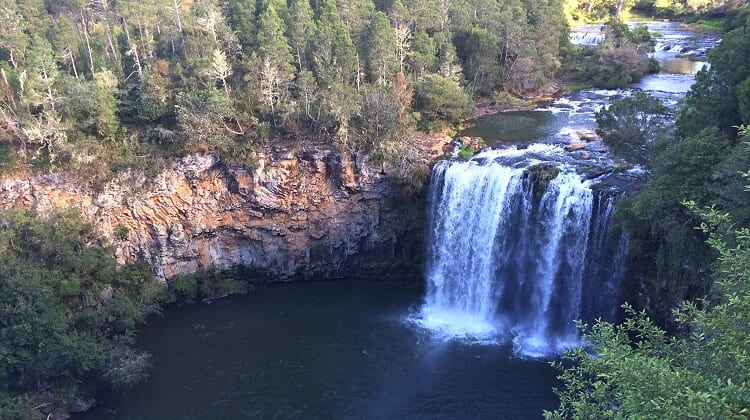 Tucked away in a scenic agricultural setting, Dangar Falls is a 30m high cascade waterfall on the Bielsdown River in Dorrigo.

A short but steep walking track leads to the base, where visitors can go for a swim in the beautiful water hole right underneath the waterfall.

How to Get to Dangar Falls

Dangar Falls is located only 2km north of the town centre of Dorrigo NSW. To get there, turn into Hickory Street from the Waterfall Way, followed by Vine Street, and continue onto Coramba Road (see map).

There is a reasonably sized car park right in front of the small Dangar Falls lookout platform where you should be able to find a parking spot.

Only a short drive away from the Dorrigo Rainforest Centre, Dangar Falls is an impressive 30m high waterfall, set in an unlikely agricultural landscape.

The last thing you’d expect to see in this seemingly flat landscape is a waterfall thundering down on the Bielsdown River.

Despite the fact that Dangar Falls is one of the most popular sights along the Waterfall Way, the viewing platform is surprisingly small.

Visitors typically need to line up in front of the lookout as it can only accommodate a handful of people at once.

But once you’re there, it becomes immediately clear why Dangar Falls is such a popular attraction. The sheer beauty of this cascade waterfall with the natural swimming hole at the base is incredible.

While Dangar Falls may not be the highest waterfall along the Waterfall Way, it’s very much an amazing and unique spectacle.

What makes Dangar Falls so special is that it’s quite a wide waterfall. It also consistently drops a huge amount of water on the river, creating this beautiful noise that is music to the ears of nature enthusiasts.

The area around the lookout tends to get quite busy during weekends, with excellent facilities such as BBQs, tables, toilets and picnic spots. Accommodation is also available close to the car park at the Dangar Falls Lodge if you wish to stay there.

Dangar Falls, Dangars Falls, or Dorrigo Falls?
The name Dangar Falls is often confused with Dangars Falls, a waterfall south of Armidale (see map). This name is short for Dangarsleigh which is the road to that waterfall.
Dangars is popular for its tranquil bush setting around a huge gorge with a campground. There are also walking tracks in the area, such as the McDirtys walking track.
Sometimes Dangar Falls is also called Dorrigo Falls, and while this name is not correct either, it does refer to the same waterfall we’re talking about in this article.

Walking Track to the Base of the Waterfall

A short walking trail brings visitors all the way to the bottom of Dangar Falls, with even better views and excellent photo opportunities.

The start of this well-maintained walking track is not too far away from the car park and the lookout.

While it does have some steep and slippery parts, it’s perfectly suitable for small children. The total return trip is less than 1.5km and can be completed within 45 minutes.

Bring your swimmers on a warm day as the huge lagoon at the base of the falls is a popular swimming hole during the summer months. The temptation to jump in is as big as the natural pool itself.

Dangar Falls is one of the many beautiful sights along the popular Waterfall Way. Another scenic waterfall that is close by is Crystal Shower Falls which you can access via the family friendly Wonga walking track.

Turn into Hickory Street from the Waterfall Way and follow Vine Street and Coramba Road all the way to the car park. 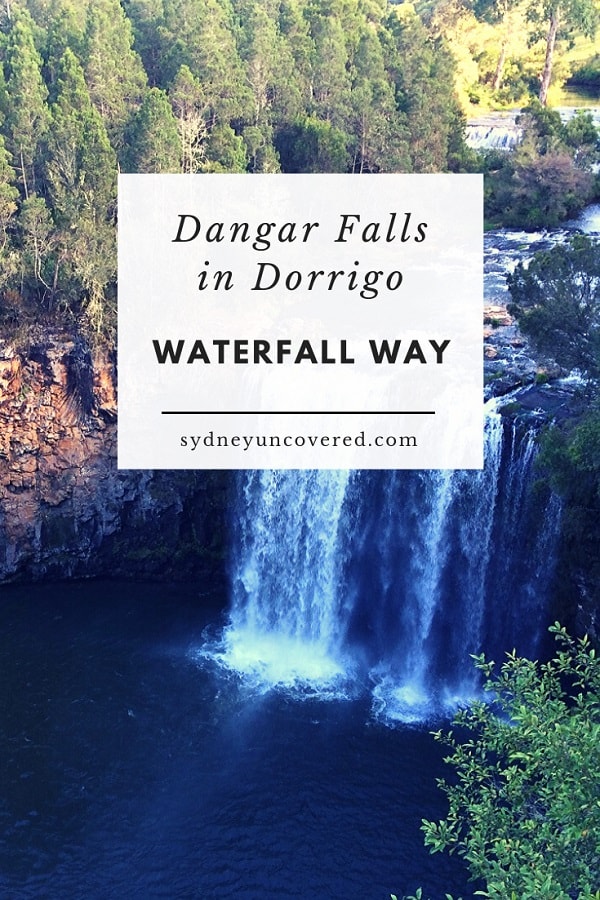