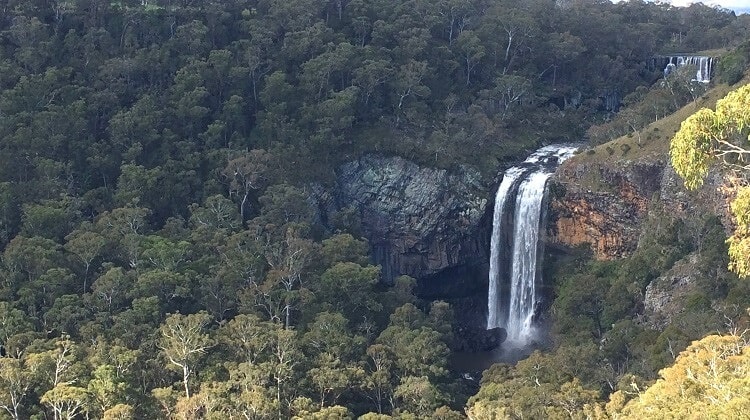 Ebor Falls is a spectacular cascade waterfall on the Guy Fawkes River in Northern New South Wales and consists of two major drops.

It is one of the various popular sightseeing attractions on the Waterfall Way, a scenic drive passing through New England and Dorrigo national parks.

Read on, and find out how best to find this beautiful waterfall, where to park your car, and where the best lookouts are located.

If you’re driving in from Armidale or Wollomombi Falls, follow Grafton Rd and Waterfall Way towards Ebor.

Then turn left into Ebor Falls Rd and continue until you arrive at the car park (see map location).

Otherwise, if you’re driving in from Dorrigo, simply follow the Waterfall Way until you make a right turn into Ebor Falls Rd.

Ebor Falls is where the Guy Fawkes River plunges more than 100m deep into a gorge via two impressive waterfalls.

The Ebor Falls landscape was created by lava spewed by the Ebor volcano millions of years ago. When you look at the waterfalls closely, you can clearly identify the lava rock formations and basalt columns.

Around Ebor Falls are several picnic areas, lookout points and also a walking track that make this a very popular weekend destination.

In September 2008, two new lookout platforms were opened that offer amazing views of both the upper and lower falls.

Check out this video for some great footage of Ebor Falls:

There are two lookout platforms at Ebor Falls, both of which have car parks:

The first car park is located next to the main viewing platform where you can see the upper falls from very close by.

The second car park is around 1 km further west from where you can enjoy views of the lower falls, but also of the surrounding scenery as part of the beautiful Guy Fawkes River National Park.

The two car parks are connected via an easy and pleasant walking track, that follows the edge of the escarpment above the Guy Fawkes River.

Instead of driving to the second lookout, it’s highly recommended to do this walking track and enjoy the beautiful scenery along the way.

From there you can truly see the magnitude of the lower Ebor Falls, with the upper Ebor Falls in the background.

Especially after a period of heavy rainfall, the views are spectacular.

Ebor Falls is one of the many waterfalls you can visit along the Waterfall Way. Another great waterfall that is close to Ebor Falls is Wollomombi Falls, which was once thought to be the highest waterfall in Australia!

There are two free car parks at Ebor Falls. One at the upper falls, and a smaller one located at the lower falls.

In the map below, the two main lookouts are marked with an “X” and the two car parks are marked with a “P”. It is recommended to park at one of them and follow the scenic walking track between the two lookout platforms.

Please note that the walking track actually connects with the Waterfall Way.