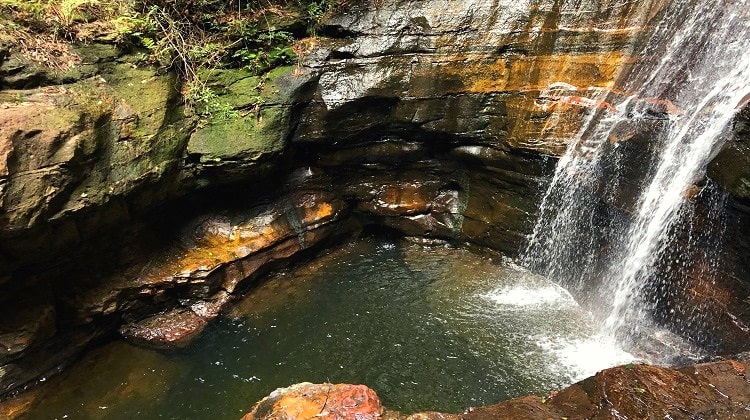 A short but steep walking track starting at the Conservation Hut in Wentworth Falls brings visitors up close and personal with Empress Falls, one of the most beautiful waterfalls in the Blue Mountains.

The walk to Empress Falls forms part of the longer and more challenging Wentworth Pass and National Pass walking tracks, two of the most iconic bush walks in New South Wales.

The return walk to Empress Falls starts and ends at the Conservation Hut, located at the end of Fletcher Street in Wentworth Falls (map).

Getting to the Conservation Hut is very easy. From the Great Western Highway, take the exit into Falls Road in Wentworth Falls, followed by a right turn into Fletcher Street.

The car park at the Conservation Hut is rather small and fills up quickly during weekends. If it’s full, you can try suburban street parking nearby.

Below map gives you a bit of an idea where this beautiful walk is located, and where you can park your car.

We’re going to describe the walk along the following highlights:

The walk down to Empress Falls is quite short, but it’s also steep. While going down is easy, the return trip can be quite the challenge, especially on warmer days.

It’s recommended to bring enough water with you, and perhaps an energy bar or a piece of fruit for some much needed energy for the climb back up.

As mentioned, the walk starts at the Conservation Hut, a popular cafe that offers breakfast and lunch daily between 9am and 4pm.

Originally opened in 1963 as a meeting place for the Blue Mountains Conservation Society, the Conservation Hut has been operating as a cafe since 1993 after a major building redevelopment.

There are several walking tracks in Wentworth Falls that start and finish at the Conservation Hut, such as the National Pass, Nature Track and Wentworth Pass.

To find the start of the Empress Falls walking track, look out for the sign that says Queen Victoria Lookout and Empress Falls.

The first section of the walk towards the Queen Victoria Lookout is a relatively easy path heading down via several sets of timber steps.

After about 300 metres, a short side track opens up to the Queen Victoria Lookout, situated above the Valley of the Waters, and facing Jamison Valley.

The views are absolutely stunning and reach as far as Mount Solitary straight ahead. On the left, Kings Tableland and the Lincoln’s Rock lookout point can also be seen.

Next stop is the Empress Lookout which faces the other side of the valley where Empress Falls and the Empress Canyon are located.

The interesting thing about the Empress Lookout is that, despite the name, you can’t actually see much of Empress Falls.

You can certainly hear it, especially when there’s lots of water flowing, but the waterfall itself is hardly visible through the many trees.

From the Empress Lookout, the track heads further down into the valley via a series of steel staircases.

While it may look a bit scary on the photo above, the staircases are quite easy to navigate with the handrails.

Once you’ve conquered the stairs, you will notice that the scenery gets a lot darker all of a sudden, as the surrounding trees and cliff edges are blocking a lot of the natural sunlight.

This is also where the walking track slowly turns into a rainforest walk, which is quite a fascinating contrast with the usually dry bush trails on higher ground.

After passing the intersection with the Nature Track, the path to Empress Falls soon crosses a creek via a set of stepping stones.

You will now start seeing the first glimpses of Empress Falls, which can be very impressive, especially after a period of rainfall when more water thunders down into the natural pool below.

The track eventually brings hikers right next, and in front of, the waterfall, surrounded by boulders and trees, creating a majestic atmosphere.

If one beautiful waterfall isn’t enough, keep following the path downstream along the creek to visit two more waterfalls.

Fed by the Valley of the Waters Creek, both Sylvia Falls and Lodore Falls are scenic cascade waterfalls that are very much worth the extra effort.

Please note though that this extra bit of walking track is not as easy and straightforward as the walk to Empress Falls.

The walking track to Empress Falls is part of our list of best walks in the Blue Mountains, so be sure to check out that list for more hiking ideas.