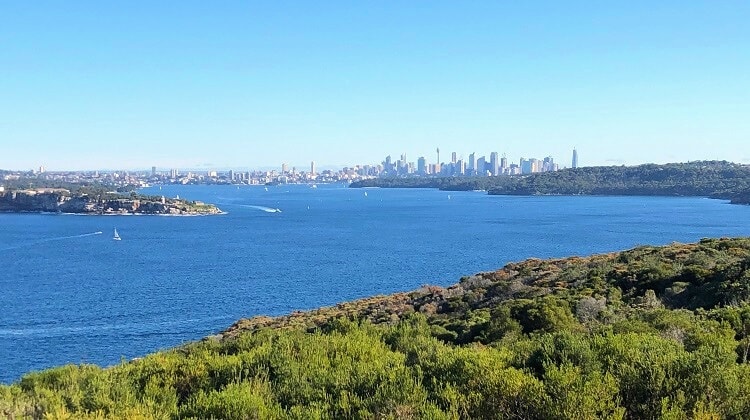 Located on Manly’s North Head, the short and easy Fairfax Walk is a scenic, family-friendly circuit walking trail that offers fantastic views of Sydney Harbour, the city skyline, South Head and the ocean.

The highlight of the walk is the Fairfax Lookout, one of the most impressive lookout points in Sydney. It’s also a popular whale watching spot during the two whale migration seasons.

Read on, and learn more about this exciting walk and lookout, how best to get there, and where to park your car.

The Fairfax Walk is very easily accessible by car. Once you’re in Manly, follow Darley Road to North Head, and then follow North Head Scenic Drive all the way to the end.

There is a reasonably large parking area where the start of the walk is, with ticket machines available to pay for your parking fees.

From the car park, make your way to the Fairfax Walking Track signpost, which marks the start and end of this exciting and scenic walk.

The Fairfax Walk also forms part of the North Head Walk, a 9.5km circuit trail that starts and ends at Manly Beach.

So, if you prefer to do a more challenging hike, the Manly North Head circuit walk is highly recommended as one of the best hikes in Sydney, and is a great way to include the Fairfax Walk.

Both the Fairfax Walk and the Fairfax Lookout were named after John Fairfax, an English-born businessman who, in 1841, founded a media company that would later become Fairfax Media.

As noted on a plaque at the lookout, reconstruction of the Fairfax Lookout was financed in 1981 by “John Fairfax & Sons”, the original name of the company.

This was to mark the 150th anniversary of the first publication of the Sydney Herald in 1831, and to commemorate the life of John Fairfax.

The Fairfax circuit walk is about 1 km long and is paved from start to finish.

The vantage points are also popular with whale watchers, who come here to spot the whales that pass by twice annually.

The Fairfax Walk is one of the highlights of North Head, an area of Sydney Harbour National Park comprising approximately 156 hectares.

North Head was first used as a quarantine station to quarantine passengers arriving in the colony on ships at the beginning of the 19th century.

In the mid-1930s, North Head was transformed into a military site and became one of the most heavily fortified sites in Australian history during the Second World War.

To explore this area further, you can either drive to the North Head Sanctuary Visitor Centre, or walk there as it’s not far from the Fairfax Walk car park.

If you decide to walk, look out for a walking trail (map) that connects with Australia’s Memorial Walk. This paved pathway links five monuments dedicated to the major conflict periods Australia has been involved in.

This Memorial Walk then connects with the Visitor Centre and the various sights that are part of the North Head Sanctuary.

Keen to spend more time in Manly? Have a look at our guide on things to do in Manly for a comprehensive list of fun activities and attractions.