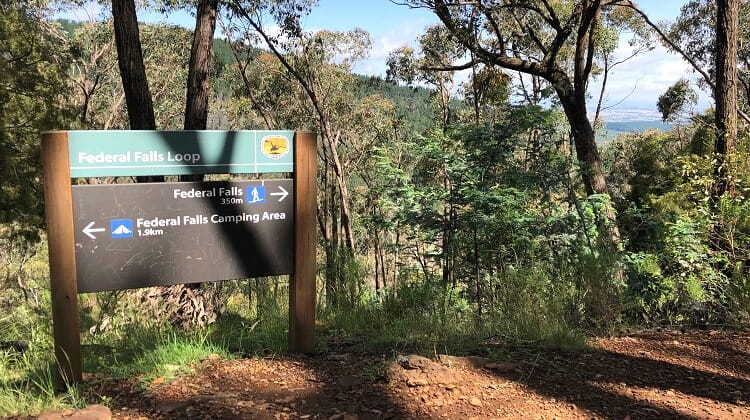 Federal Falls is a stunning waterfall in Mount Canobolas State Conservation Area near the city of Orange in the Central Tablelands region.

A moderately challenging circuit walking track, starting from the Federal Falls Campground, leads to the base of this waterfall, with scenic bushland to explore along the way.

Going to Orange for a long weekend? Have a look at our list of popular Orange attractions and activities to help plan your trip.

As mentioned, the walk to Federal Falls starts from the camping and picnic area, which comes with a reasonably sized car park (see map location).

There are various ways to drive there from Orange, but the easiest and quickest way is via Cargo Road out of Orange, followed by a left turn into Lake Canobolas Road which goes past Lake Canobolas.

The Federal Falls walk is a loop, with start and finish at the picnic area. The loop is approximately 4 km in length, with an extra detour of 700 metres to the actual waterfall.

There is no need to do the entire loop to see the waterfall though. You have the option to do the northern side of the walk as a return trip, which is slightly shorter and also easier than the southern side.

It is recommended though to do the loop, because the scenery along the southern track is a bit prettier than along the northern track.

The walk overall is moderately challenging, with the most challenging section being the detour to the waterfall which is very steep. It’s important to wear good hiking shoes for the best grip.

In the below track notes, we’re going to describe the Federal Falls loop walk along the following three sections:

Here is a map of the walk:

If you’re going to do the entire loop, it is generally recommended to hike in a clockwise manner, which means you’re doing the southern section of the loop first.

You can find the starting point of that section of the loop walk at the big informational signpost at the southern end of the picnic ground.

The first 500 metres of this walk are reasonably flat, followed by a gradually steeper descent through the forest.

As you get closer to the waterfall, the scenery also becomes a lot prettier, with the walking path crossing the creek a few times.

A small footbridge crossing that creek is a good milestone to aim for, knowing that the waterfall is not much further away from that point.

At the end of the southern track, after approximately 2 km, you will arrive at a signposted junction with the northern track.

This is where you need to go straight ahead to go and see the waterfall, which also means the steep descent will start very soon.

Most of this descent is on wooden steps, and some parts have handrails installed so it’s easier to stay balanced and to stay on the right path.

At some point, the waterfall starts to appear right in front of you, which, as you can imagine, is quite a rewarding experience.

Federal Falls is located in the steep volcanic basalt landscape of Mount Canobolas, and more than often there isn’t actually much water falling down the cliff.

As such, it’s best to go there after a period of decent rainfall to make the hike more worthwhile. That said though, the walk itself is also very enjoyable, so it’s always a win in our books.

You can walk all the way to the base of the waterfall, but please be mindful that the many large rocks at the bottom can be very slippery.

Once you’ve finished exploring the beautiful waterfall that is Federall Falls, it’s time to head back up to the car park.

The Northern Track is slightly easier and shorter than the southern track, but it’s still going uphill, so it does require a bit of effort.

The path is very easy to follow and overall it’s well maintained, and the bushland scenery is enjoyable, although there is less variation than on the other side of the loop walk.

Once you’ve made it back to the car park, it’s worth visiting the Walls Lookout on Mount Canobolas, which is only a short drive away.