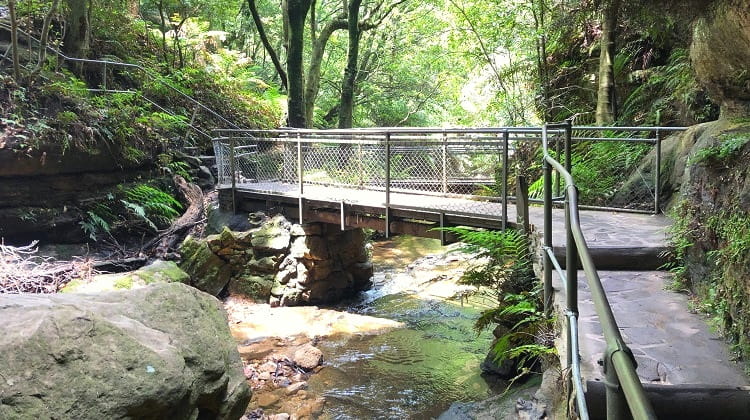 The Federal Pass walking track is one of the most historical and challenging walks in the Blue Mountains, exploring old bushland trails in the Katoomba and Leura area.

This classic hike follows the base of the cliffs, from Leura to the Golden Stairs and Ruined Castle, passing through dense forests with great picnic spots along the way.

There are various entry and exit points to the walk, which means you don’t have to do the whole Federal Pass in one go. Each of these points involves a challenging descent into, or climb out of, the valley.

Sections of the Federal Pass

With 13 km one way, the Federal Pass walking track is very long. Most people opt not to do the whole route in one go and instead conquer this hike in smaller sections.

In this article, we’ve divided the Federal Pass into four sections, with clear start and end points. Each section below comes with a map that will give you a rough idea of where this section is located.

Overall, the Federal Pass is well sign-posted, and you won’t get lost easily. The track itself can be challenging at times, but it’s pretty easy to follow from start to finish.

When heading out to the Blue Mountains to do a hike, check the National Parks website to see if there are any closures in the areas you are planning to explore.

Update 2022:
The Federal Pass section between Scenic World and Ruined Castle is closed due to landslides and storm damage. Check the NSW National Parks website for the latest updates.

Alternatively, you can also access the Federal Pass by descending into the valley via a small section of the Prince Henry Cliff walk accessible via Cliff Drive.

The track from Leura Cascades and Fern Bower to the Giant Stairway goes through Leura Forest, which is so peaceful and quiet that it makes you feel like you’re far away from civilization.

Towards the end of this first section, you can either continue the Federal Pass or climb out of the valley via the Giant Stairway. Just know that this climb up the stairs is very challenging!

This second section follows the bush trail from the Giant Stairway to the Furber Steps and the Scenic World valley station in the Katoomba area, passing the base of Katoomba Falls.

The Furber Steps allow you to exit the Federal Pass and hike back up to the Katoomba Falls circuit walk and to Scenic World on Cliff Drive.

Tip!
A great day adventure in the Blue Mountains is a circuit trip that starts with a ride on the Scenic Skyway, followed by a section of the Prince Henry Cliff Walk to Echo Point. From the Three Sisters, you descend into the valley via the Giant Stairway, followed by the hike to the Scenic Railway valley station, where you can travel back up to Scenic World.

The third section brings you to the base of the Golden Stairs along the Narrow Neck Plateau on the western side of the Katoomba area.

One of the landmarks in this section is the Landslide, a vertical cliff where in 1931, a series of significant rockslides occurred. There are some excellent vantage points along the Federal Pass walking track with good views of this cliff from below.

From the Landslide, it’s a pleasant walk through dense trees, following the base of the cliffs, to the Golden Stairs.

According to NSW National Parks (and Google maps), this final section is officially part of the Federal Pass, but it can be considered optional.

With that in mind, it would perhaps make more sense to do the Ruined Castle track as a separate adventure on a different day.

It’s hard to imagine now, but the trail to Ruined Castle was once part of an old coal mining route through the Jamison Valley in the 19th century.

After about an hour of hiking on this trail from the Golden Stairs, turn right at the intersection going up the hill to the Ruined Castle, a unique rock formation located on top of a ridge between Castle Head and Mount Solitary.

Once you’ve visited Ruined Castle, you have the option to continue your hiking adventure to Mount Solitary, or you can make your way back to the Golden Stairs.

Keen to do more great hikes? Check out our list of the best walking tracks in the Blue Mountains for some great ideas and options!