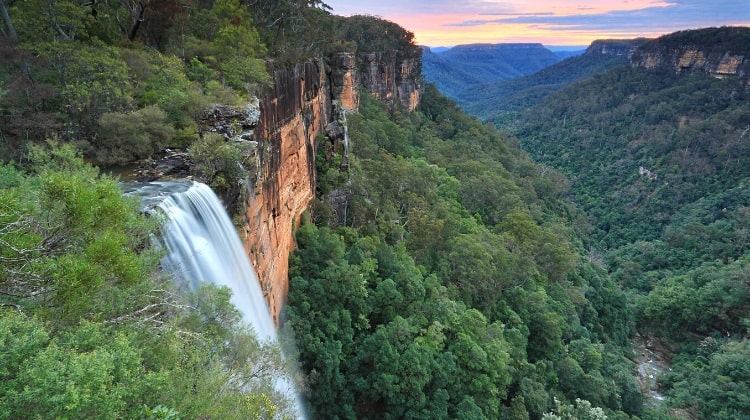 Fitzroy Falls is a picturesque village in Morton National Park (Southern Highlands), famous for its spectacular waterfall that goes by the same name.

Follow the short walking trail from the Fitzroy Falls Visitor Centre along the creek to a lookout platform with spectacular views of the waterfall and the Yarrunga Valley.

Around Fitzroy Falls are a couple of exciting bushwalking tracks through beautiful rainforests, inhabited by various bird species.

There are two ways to drive to Fitzroy Falls.

Driving in from the north, turn into Sheepwash Rd or Nowra Rd from the Illawarra Highway and follow the signs to the car park at the visitor centre (see map location).

Driving in from the south/west (Nowra, Kiama), turn into Moss Vale Rd from the Princess Highway which changes into Nowra Rd. Keep following until you get to the Fitzroy Falls car park.

This route is nicer as you drive through Kangaroo Valley with great scenery. The car park costs $4 for a whole day. Unfortunately, dogs are not permitted.

With a population of just over 200 people, Fitzroy Falls is a small village located in the Southern Highlands region of New South Wales.

The village carries the same name as the impressive waterfall that descends more than 80 metres into Yarrunga Valley.

The waterfall forms part of Wildes Meadow Creek that flows into Yarrunga Creek, which connects with the Kangaroo River further south. Yarrunga was also the initial name of what is now called the Fitzroy Falls area.

Charles Throsby, a surgeon and explorer, was the first European to see the waterfall in the early 19th century.

The waterfall was ultimately renamed after Sir Charles Fitzroy, Governor of New South Wales, who visited the area in 1850.

The waterfall slowly turned into a tourist attraction in the 19th century, but the village itself has always remained small.

The Fitzroy Falls visitor centre is located right next to the car park on Nowra Rd and is open daily from 9 am to 5 pm. The cost of parking is $4 for the whole day.

Visiting the award-winning visitor centre is the perfect way to start your visit to Fitzroy Falls. The centre offers lots of information about the history, wildlife and Aboriginal culture of the area. The centre can also arrange environmental programmes for schools and tour groups.

You’ll also find a gift shop in the centre with a large amount of authentic, Australian-made souvenirs for sale. Next door, the little café serves very decent coffee and delicious cake, with a small area for children to play.

To get to the lookout, simply follow the signs from the visitor centre.

A convenient boardwalk follows the path of the creek and guides you to a beautiful lookout point from where you can enjoy the breathtaking views of the waterfall and the surrounding valley.

If you continue walking along the West Rim Track, it’s only a short distance to another fantastic lookout, the Jersey Lookout.

The photo opportunities are plentiful so make sure you bring your camera along.

You might not know, but not too far away from the waterfall is a dam and a reservoir, the Fitzroy Falls Reservoir, which also has a nice picnic area. Read more about this reservoir and other dams in our list of dams in and around Sydney.

These two tracks are quite different in regards to scenery, so it’s worth doing (parts of) both if you have the time and energy.

The West Rim walking track is a 4km return walk with great views of the Yarrunga Valley. There are several different lookouts and waterfalls on the way to explore.

This walking track is considered the easier of the two and offers slightly more exciting scenery than the East Rim walking track.

In general, the West Rim track is fairly easy with a few steep sections. Be mindful though that the track can get slippery at times, especially after a few days of rainfall.

The full West Rim Track terminates at the Renown Lookout from where you have the opportunity to take in some amazing views before heading back.

Also known as the Wildflower Walk, the East Rim walking track is a 7km return walk through a lush rainforest full of wildlife.

This track offers great views of Fitzroy Falls and the Yarrunga valley below.

The start of the East Rim is directly underneath the bridge where the boardwalk branches off towards the east.

The park stretches from the west of Ulladulla to the south of Bundanoon and is characterised by a flat plateau, beautiful steep gorges, rugged sandstone cliffs and breathtaking waterfalls, combined with dense rainforest.

In 1938 the area became a national park and was named after Mark Morton, a local New South Wales politician who had always fought hard to protect the unique and beautiful landscape of the area. Mark Morton died in that same year before the park got its current name.

The area has also long been of significance for local Aboriginal people, with many recorded sites dating back more than 20,000 years.

Also read:
The best waterfalls in and around Sydney.

The Fitzroy Falls car park is located on Nowra Road and is easy to find.

If you can, it’s recommended to drive in via Kangaroo Valley in the southwest as the scenery is very pretty compared to the area in the north when coming in via the Illawarra Highway.

The official address of the Fitzroy Falls Visitor Centre: