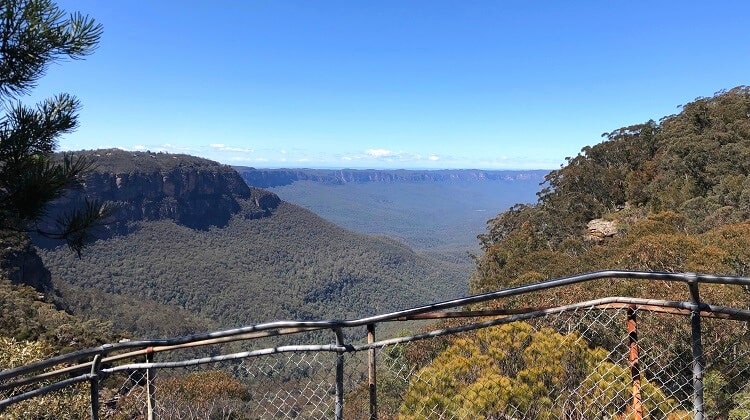 The historic Giant Stairway and Dardanelles Pass circuit walk is an exciting walking track through Leura Forest and along the cliff edge overlooking Jamison Valley.

This challenging and adventurous walking track offers a lot of bushwalking goodness, including waterfalls, panoramic valley views, lush rainforest, and a bit of steep climbing.

Read on, and find out more about the highlights of this walk, how best to get there, and other highlights nearby.

Since this is a circuit walking track, it can be commenced at various locations. The two most logical starting points are at Echo Point in Katoomba and further north along Cliff Drive, closer to Leura.

The map at the end of this article gives you an impression of this walking track, including these two starting points.

The drawback of starting at Echo Point is that this is a bustling spot, and parking is almost always ticketed.

The best parking areas are on Echo Point Road and Cliff Drive. However, you may need to park a little further away on busy days.

An alternative, and perhaps better, starting point is along Cliff Drive at the intersection with Merriwa Street. Check out this map for the exact spot.

From Leura Mall, turn right into Cliff Drive and continue until the intersection with Merriwa Street. This is a quiet spot with lots of free street parking available.

You can start the walk by heading into the bush via the wooden stairs at a sign that says Prince Henry Cliff Walk and Echo Point.

The Giant Stairway and Dardanelles Pass circuit walk is considered a challenging track. It’s not a particularly long walk, but it involves a couple of very steep sections.

The circuit walk covers Leura Forest at the bottom of the valley and the cliff edge above the valley. This means there is some serious descending and ascending involved.

The famous Giant Stairway at the Three Sisters is an incredible piece of engineering with no less than 900 steps. And it is steep. Very, very steep.

For that reason, it is probably best to do this circuit walk in an anticlockwise manner, so you can descend into the valley via the Giant Stairway rather than having to climb it.

This, of course, means you will need to climb out of the valley on the other side of the circuit walk. But that’s a more gradual ascent and is therefore somewhat easier.

The below track notes describe the circuit walk in an anticlockwise manner, starting at the Giant Stairway at the Three Sisters.

Opened to the public in 1932, the 540m long Giant Stairway descends more than 300m into Jamison Valley via a magnificent piece of engineering.

This unique structure consists of over 900 steps in the form of several steel staircases and steps cut from the cliff face.

The idea behind the Giant Stairway was to create a connection between the cliff top at Echo Point and the Federal Pass in the valley below.

Access to Giant Stairway is via an imposing archway structure.

Before heading down into the valley, you can cross the so-called Honeymoon Bridge, which connects with a rock overhang that is part of the first of the Three Sisters.

At the bottom of the Giant Stairway is an intersection.

The path to the right leads to the Scenic World valley station, along the Federal Pass. The path to the left goes into Leura Forest, as part of the Dardanelles Pass.

The Dardanelles Pass is a historical link between the various walking tracks in the Leura area and the bottom of the Giant Stairway in the Katoomba area.

Even though it’s home to various picnic tables and artificial shelters, Leura Forest looks and feels like a completely different world, far away from civilization.

Water is more abundant in the valley with ongoing runoff from the cliffs and shelter from the giant trees. The forest therefore rarely dries out, resulting in a pleasantly humid and subtropical environment.

Lila Falls, Marguerite Cascades, and Linda Falls mark the start of the climb out of the valley via the Fern Bower Track.

Fern Bower is a signposted area that is part of the original Federal Pass. It is a beautiful section of the circuit walk, sheltered from the drying winds and the summer heat.

This is where the forest turns lush and green, with tall trees such as Sassafras and Coachwoods providing shade for ferns to thrive on the forest floor. The area is also home to lots of different bird and mammal species.

The ascent via Fern Bower is certainly not as challenging as the Giant Stairway, but it also shouldn’t be underestimated.

When you reach the end of the steep climb, the Fern Bower Track connects with the Prince Henry Cliff Walk.

The section of the Prince Henry Cliff Walk to the Three Sisters is relatively easy and includes several scenic lookout points.

You can start this beautiful bushwalk either from Echo Point (marked as 1 on the below map) or from Cliff Drive further north (2).

It’s recommended to follow the track in an anticlockwise manner so that you can descend into the valley via the Gaint Stairway.

If you start the walk from Echo Point, you will need to include the 500m long Three Sisters Walk (marked in red) to get to the start of the Giant Stairway. 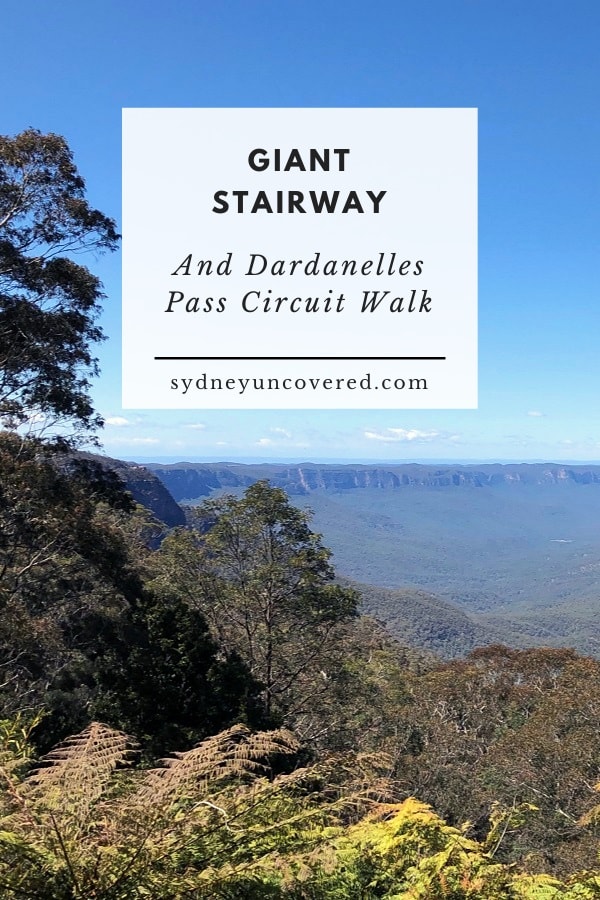