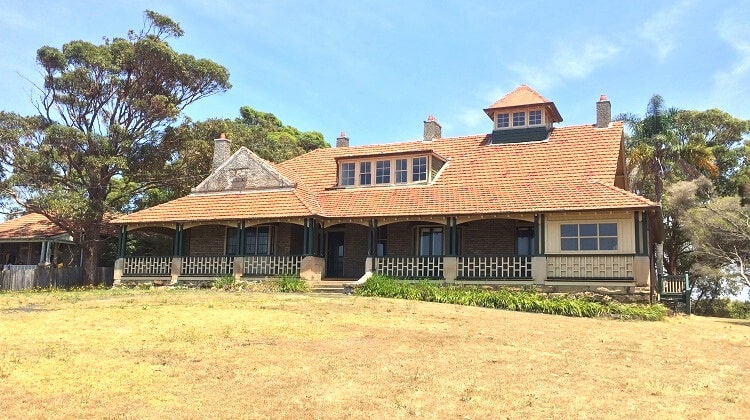 Throughout the years, Goat Island has served as a gunpowder store, a water police station, a source of sandstone for Sydney real estate, and much more.

You can experience the rich history of Goat Island and enjoy panoramic Harbour views by doing a guided tour with National Parks and Wildlife Service.

Did you know that Sydney Harbour is home to eight islands, and five former islands? Of these islands, Goat Island is one of the most interesting ones.

It is unclear how this island got its name, but one things is for sure, it has nothing to do with goats present on the island.

Some say it’s because the island is shaped like a goat, others say the name matches well with the name of Cockatoo Island next door.

Known by the local Aboriginal people (Cadigal) as Me-mel (or Memel), Goat Island is located off the shores of Balmain, west of the Harbour Bridge.

The word Me-mel means eye, which likely referred to the characteristic shape of the 4.5 hectares large island.

Aboriginal people occupied the island long before white settlement with a few Aboriginal sites still visible, such as a midden and a rock shelter.

Bennelong, a local Aboriginal man who served as an intermediary between the Aboriginal people and the British settlers at the end of the 18th century, claimed the island was owned by his father.

Bennelong often visited the island with his second wife Barangaroo.

In the 1830’s, convicts were used to quarry sandstone away from the island to be used to construct buildings in Sydney.

It was also decided to use Goat Island as the place to store large amounts of military explosives. Until that time, gunpowder was stored in The Rocks which was considered too dangerous for the then booming city.

A huge gunpowder magazine with a bomb-proof construction was built and completed by the same convicts towards the end of the 1830’s. A lot of the native trees and vegetation was also cleared out to avoid fire hazard.

In the 1850’s, the larger Queen’s Magazine – with up to 3m thick walls – was constructed on the island, which would ultimately store more than 7,000 barrels of gunpowder, enough to potentially blow up the entire city.

After completion of all these works, the convicts were moved to neighbouring Cockatoo Island for more hard labour in the sun.

During this time, a convict prisoner by the name of Charles “Bony” Anderson was chained up on the island for a couple of years.

The story goes that he had sustained an injury to his head during his service in the navy and became hard to handle as a result of brain damage.

He was also condemned to no less than 1,200 lashes as a punishment for his many attempts to escape.

The rock bench where he was chained is still there and serves as a stark reminder of this rather tragic story.

By 1900 all explosives were moved to nearby Spectacle Island, and Goat Island became the headquarters of the Sydney Harbour Trust, responsible for the maintenance of the fleet of tug boats and dredgers.

They were also responsible for cleaning up the harbour and killing rats after Sydney was hit by an outbreak of the bubonic plague at the start of the 20th century.

One of the most iconic buildings on the island is the large residence for the Harbour Master that was built in the 1920’s (see cover photo). Standing tall and proud on the highest point of the island, the luxury mansion is indeed a very impressive sight!

No doubt the head employee of the Harbour Trust had no complaints about the panoramic views he enjoyed across Sydney Harbour.

In 1936, the Harbour Trust was replaced by the NSW Maritime Services Board. In the following years, Goat Island became home to members of the Board’s Fire Brigade and their families.

A recreational hall was built for the residents which became a famous Saturday night venue for both those residents as well as for people from the mainland. Sadly, this hall does not exist anymore today.

A shipyard was also established on the island around this time to build and repair large vessels. The 1950’s and 1960’s were a peak period, with Goat Island turning into a busy place for shipbuilding and repairs.

This all came to an end when the maritime industry slowly disappeared in the 1970’s and 1980’s. Almost a century after it was created, the shipyard on the island is still active doing minor repairs.

Have you ever watched an episode of Water Rats?

You guessed it, Goat Island was the set and location for this popular television drama that ran for six seasons between 1996 and 2001.

A rather ugly purpose-built shed is still present on the island, despite the fact that it was supposed to be demolished.

The 21st Century and Beyond

With such a long and rich history, Goat Island is now part of the Sydney Harbour National Park.

The island is mainly used as a tourist destination for guided tours, and it’s also a popular spot to watch the Sydney fireworks display on New Year’s Eve.

In 2016, the then Baird NSW government announced its intention to return management of Goat Island to the Aboriginal people of New South Wales.

Concerts on the Island

Goat Island has also been home to a couple of iconic rock concerts.

In the summer of 1985, Midnight Oil played the Oils On The Water concert to celebrate the 10th anniversary of Triple J.

And in the year 2000, Green Day set foot on the island to do a small concert in front of a small but passionate crowd, also presented by that same radio station. You can watch that concert on YouTube here.

Foo Fighters and Kings of Leon have also performed on the island in more recent years.

If you’d like to explore this fascinating island yourself and learn more about its fascinating history, you can book a guided tour with National Parks and Wildlife Service.

The 2.5-hour Goat Island Heritage Tour is led by a very knowledgeable tour guide and includes the return ferry trip between Goat Island and Circular Quay. The tour runs on the 1st and 3rd Sunday of the month.

Below is the Google Map of Goat Island.

As you can see, the island is located in the middle of Sydney Harbour, nestled between the Harbour Bridge, Balls Head Reserve, and Balmain.