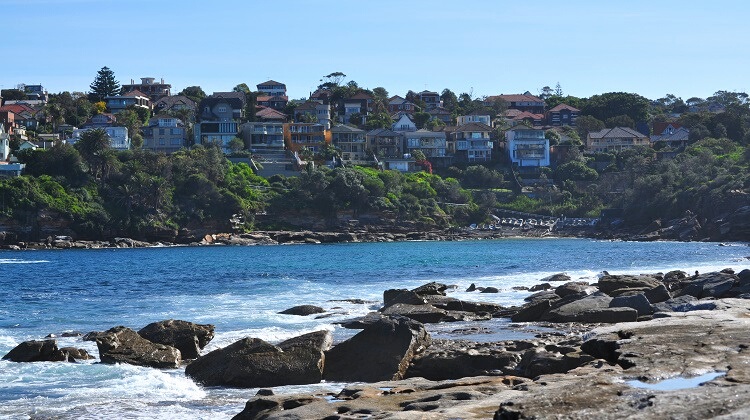 Located just moments away from Clovelly and Coogee beach, Gordons Bay is a small piece of paradise along the coastal walk between Bondi and Coogee.

Protected by a reef, the bay is a popular spot for fishing, swimming, diving and snorkeling, away from the crowds at the larger beaches nearby.

The best place to park your car is at the Clovelly Beach car park on Victory Street (see map location).

Even though it’s quite a big parking area, it does fill up rather quickly on sunny weekends when people want to go swimming at Clovelly Beach.

Alternatively you can try to find parking in the paid parking areas at the north end of Coogee Beach or surrounding suburban streets.

Or why not leave the car at home? Various bus routes lead to the Clovelly Road Terminus from where you can walk to Gordons Bay. Check the Transport NSW website for more details.

Quietly nestled between Clovelly beach and Coogee beach, Gordons Bay is a small and secluded oasis that is worth a visit.

The bay itself has no car parking areas, and is only accessible via the coastal walk between Bondi and Coogee in Sydney’s eastern suburbs.

The bay was named after Lewis Gordon, a government surveyor who was granted crown land in this area in the 19th century.

He originally named the area Cliff-Brook, a name that is still used for a heritage mansion facing Gordons Bay and the track that connects Gordons Bay with Victory St in Clovelly.

Gordons bay does have a small strip of sand but it can hardly be called a beach. Racks of boats from the local fishing club cover most of it, which kind of makes Gordons Bay look and feel like a quiet fisherman’s village on a remote Greek island.

A beautiful boardwalk swings around the bay, as part of the coastal walking track, and offers great views of the natural surroundings of the area.

This boardwalk also functions as protection against damage to the native flora and fauna in and around the bay.

When the tides are low though, you can certainly enjoy the beach for a swim and a bit of sunbathing. Alternatively you can use the rocky sections on the north side of Gordons Bay as your base.

Besides fishing, Gordons Bay is also a popular spot with snorkelers and divers.

The Gordons Bay Underwater Nature Trail, maintained by the Gordons Bay scuba diving club, is a self-guided 600 metres long trail. Not a walking trail, but an underwater trail that consists of concrete filled drums linked by a chain.

Several steel plaques on the trail display helpful information about the underwater world. It would take an average diver or snorkeler around 40 minutes to complete this trail.

The deepest point is 14 meters but on a very clear day snorkelers should be able to enjoy good underwater views too.

Here’s a cool video of a free-diving session at Gordons Bay: