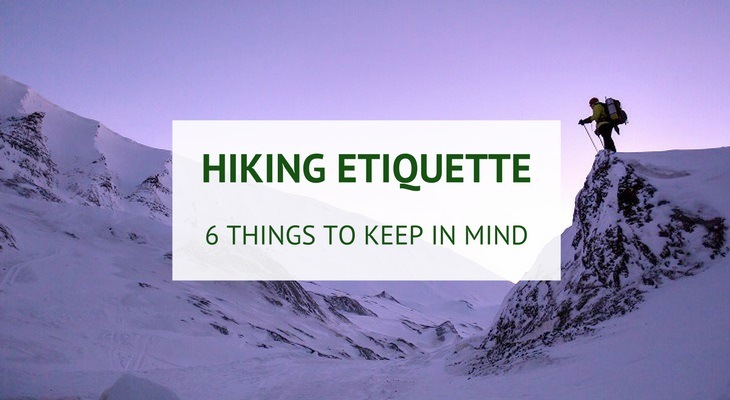 Most of us love being in the great outdoors and hiking is one of the best ways to appreciate all the goodness that Mother Nature has to offer.

With the rise of Internet and WiFi in the last two decades, information about hiking trails is much more readily available than it was 10 or 20 years ago. As a result, hiking trails that were still undiscovered not too long ago, are now popular weekend destinations.

So with more people out and about on hiking trails, it’s perhaps a good idea to think about good hiking etiquette. The following things to keep in mind while on the trail often come down to plain common sense and having respect for our fellow hikers.

The best part of hiking and bushwalking is that you get to enjoy the pure smells and sounds of nature. Especially if you live in or close to the city, going outside for a bushwalk is not just a good way of working out, it’s also a great stress-reliever.

It’s essentially an escape. An escape from the noise of your daily environment. People playing loud music while hiking in the beautiful outdoors can greatly ruin that experience. If you really can’t live without your music while on the trail, simply use earphones.

Similarly, if you’re taking a lot of photos and selfies while on the trail, please be mindful of the fellow hikers around you. Don’t block the paths and hold up other hikers. Also don’t occupy popular lookout points for too long just to get that perfect photo.

It’s good custom to greet or at least acknowledge your fellow hikers as they walk past. A simple nod can make all the difference. We’re all in the same boat.

Being out in the bush means that we don’t have to behave like we do in the city. We can be friendly, greet each other, and maybe even have a chat. It’s fun!

Just like on normal roads while driving, you should ideally also stick to the left side of the path (or right side depending on the country you’re in) when hiking in the bush. Just so that faster hikers and can easily go past you.

But this is up for debate. It heavily depends on how big the actual path is and also how busy it is on the path. If you are literally the only hiker around, what’s the point in staying to the side?

If you’re approaching another group of hikers that are going slower than you, simply make a bit of a sound so that they can hear you. They’ll move out of your way and everyone’s happy. Too easy.

This one is a no-brainer, but sadly, people still leave rubbish behind.

Plastic bottles, food wraps, we see it all the time. But also banana peels, apple cores and other fruit leftovers should not be dumped in the bush. They can take quite some time to decompose and can disturb the local ecosystem.

Respect Mother Nature and your fellow hikers. Don’t leave anything behind that doesn’t belong there, it’s really that simple. With water, it’s best to bring your own reusable water bottle that is easy to carry around.

Shared paths… we have quite of lot of them in Australia. You’ll find them mostly in suburban areas but shared paths are also used in more remote areas that are popular with hikers.

There is in essence nothing wrong with shared paths, as long as we stay aware of the fact that different types of traffic are using that very same path.

If you’re a hiker, it’s not the best idea to always walk in the middle of the path during peak hours. If it’s very busy, simply walk on one side of the path (ideally the left side if you’re in Australia) and be mindful of other traffic.

If you’re a cyclist (or runner), keep in mind that just because cyclists and runners go faster than hikers, that doesn’t mean they are higher in the hierarchy.

So if you’re a cyclist and you’re approaching a hiker or a group of hikers, slow down and make yourself noticeable by ringing your bell gently. Then acknowledge the hikers as you cycle (or run) past them.

As a general rule of thumb, the person in the less vulnerable position should be mindful of the more vulnerable person on the same path.

The traditional rule is to give way to hikers going uphill. The reason behind this rule is that hiking uphill is obviously harder and it can be quite frustrating to have to stop and lose momentum in order to let downhill traffic go past.

But this does not always have to be true. If you’re going uphill and you’re struggling, yielding to downhill traffic is a great excuse to have a little break.

In other words, it’s best to quickly negotiate who has right of way when meeting fellow hikers going the opposite direction.