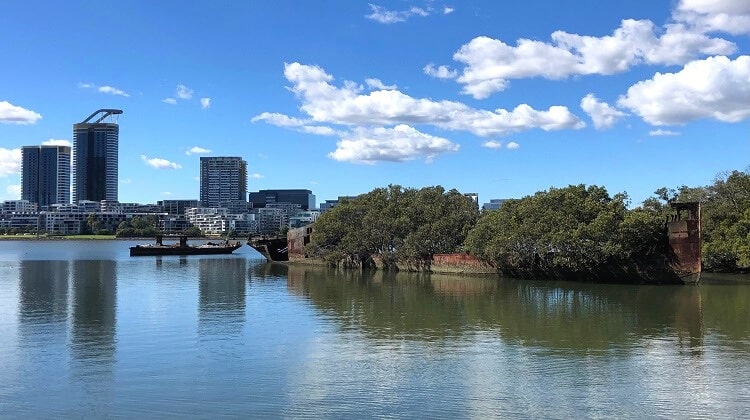 The shipwrecks of Homebush Bay is one of those beautiful hidden secrets in Sydney that you may have heard of before but have never actually been to.

Read on to find out how to get to these shipwrecks and to learn more about how they ended up in Homebush Bay in the first place.

Before you go out and discover these shipwrecks, it’s important to understand that there are multiple wrecks to be found in the bay.

The most photographed wreck is the SS Ayrfield, and some people only go and see that particular wreck, often not realising that there are more in the bay.

There are two ways to go and see the shipwrecks in Homebush Bay:

This map shows both these car parks, plus the 5 shipwrecks that can be discovered walking along the shoreline of Wentworth Point and Sydney Olympic Park:

These five shipwrecks are:

If you’re in a hurry, it’s best to start from the Archery Centre car park. You will find a couple of publicly accessible paths between the apartment blocks leading to the waterfront.

Once you’re at the waterfront, you will see the first shipwreck, the SS Ayrfield. From there, cross the creek via Bennelong Parkway, and then follow the walking path back to the waterfront to see the other wrekcs.

If you have a bit more time, it’s strongly recommended to start from the Badu Mangroves car park. The walking track through the mangroves and past the Waterbird Refuge is highly enjoyable, before seeing the shipwrecks.

In the below section, we are going to discuss the Homebush Bay shipwrecks following this longer walking track.

You might be wondering how these shipwrecks ended up in the shallow waters of Homebush Bay. Well, it’s definitely not a tragic tale involving heroic seamen and a vicious storm.

The area where these wrecks are now stranded, used to be a shipwreck yard in the 1960’s and 1970’s. Old and unused vessels were transported to this yard to be decommissioned and disposed of.

But the yard vanished, and consequently, some of their shipwrecks were left behind. And with nature taking over, these wrecks have slowly turned into floating forests, which makes for great photo opportunities.

As mentioned, the best way to go and discover these wrecks is by doing the walking track from the Badu Mangroves to the Waterbird Refuge, and on to the southern tip of Wentworth Point.

The Badu Mangroves form the largest remaining intertidal wetland on the Parramatta River. After years of neglect, it is now flourishing again, with various flora and fauna species thriving.

A boardwalk navigates through the mangroves, offering visitors the opportunity to experience this fascinating ecosystem from close by.

The walking track then continues on past the Waterbird Refuge, a 10-hectares large wetland with lots of wildlife including rare and endangered migratory birds.

Now let’s have a closer look at the five shipwrecks.

The first shipwreck can be found opposite the Waterbird Refuge.

Look out for a signpost and a bench, and then look carefully through the mangrove trees and you will see the remains of the HMAS Karangi in the water.

The HMAS Karangi was a steel-hulled boom defence vessel, built at Cockatoo Island and commissioned into the Royal Australian Navy in 1941.

The SS Heroic lies right behind the HMAS Karangi, and is a bit hard to identify for that exact reason.

This was a steel-hulled steam tugboat, built in 1909 in the United Kingdom for a tugboat operator in Sydney. It was brought to Homebush Bay in the 1970’s to be broken up.

The walking track continues northbound, past the observation tower, and onto a small peninsula (the official shipwreck viewing platform) where you can see another shipwreck on your right.

We don’t actually know the name of this vessel, but it seems to be a small one. Quietly hidden in the mangroves, you can actually touch it.

Walk to the northern tip of the peninsula, and you can catch the first glimpses of the SS Ayrfield and the SS Mortlake Bank further north.

To get a closer look at these two wrecks, continue the walking track northbound, cross Bennelong Parkway, and look for the walking path between the apartment blocks that leads back to the foreshore.

And that brings us to the most remarkable, and most photographed, shipwreck in Homebush Bay; the SS Ayrfield.

Originally launched as the SS Corrimal, it was built in England in 1911 as a coal-carrying ship. During WWII however, it was used by the government to assist American soldiers in the Pacific Ocean.

After the war, the ship again served as a commercial vessel, and was eventually retired from service in 1972 and brought to Homebush Bay to be broken up.

The SS Mortlake Bank lies just behind the SS Ayrfield, and can be seen from the same viewing points.

The Mortlake Bank was a steel-hulled steam collier built in the 1920’s in the United Kingdom, and after decades of service in Australia, it was brought to Homebush Bay for decommissioning.

Once you’ve finished exploring the shipwrecks of Homebush Bay, don’t forget to also visit the Brickpit Ring Walk. This is an elevated circular boardwalk above a large pond where once a flourishing brickyard was. It’s quite an amazing sight with great views.