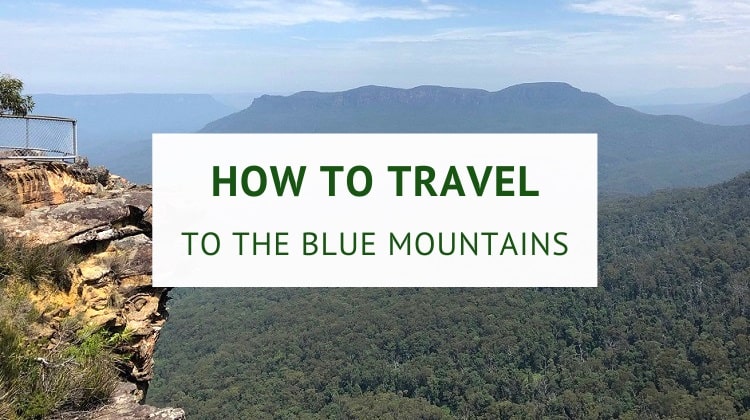 Getting to the Blue Mountains from Sydney is much easier than you may think. Sydney’s most popular national park, located around 60 km west of the city, is easily accessible by car, by train, as well as by bus or coach.

Let’s go through the various transport options in a bit more detail, so you can work out how best to get to the Blue Mountains.

Travel to the Blue Mountains by Car

The Blue Mountains is one of Sydney’s most popular day trip destinations, not only because this national park has so much to offer, but also because it’s so easily accessible from Sydney.

Both highways meet each other in the Lithgow area.

Which highway you choose to drive into the Blue Mountains will depend on which tourist attractions you wish to visit or which walking tracks you wish to undertake (more on that further below).

To save more time and traffic lights on Parramatta Road, you can choose to go onto the M4 Western Motorway at Ashfield, for which you would need to pay extra toll fees.

The Nepean River forms the eastern boundary of the Blue Mountains region which is located only 60 km west from the Sydney CBD (see map location), with Katoomba an extra 40 km further away via the Great Western Highway.

The Bells Line of Road, or otherwise the Mount Wilson region, is typically much quieter than the Great Western Highway, which passes the most popular tourist attractions and walking tracks.

The most popular destinations in the Blue Mountains are, in a clockwise direction:

The below map shows where these areas are located, with the Great Western Highway in the south, and the Bells Line of Road in the north.

Glenbrook:
Glenbrook is the first town in the Lower Blue Mountains, and is home to a couple of nice walking tracks, such as the Lapstone Zig Zag walk, and the walking track to Jellybean Pool.

Lawson:
Lawson is often considered the first main stop in the Blue Mountains, and is home to a number of exciting walking tracks, such as the South Lawson circuit walk and the nearby Horseshoe Falls walking track.

Lithgow:
Lithgow is the next town, and is the perfect base to visit some of the lesser known sights and walking tracks, such as the Glow Worm Tunnel and the Blackfellow Hands Cave.

Read our guide with things to do in and around Lithgow for a complete list of the highlights.

Read our guide with things to do in the Mount Wilson area for a complete list of the highlights.

Travel to the Blue Mountains by Train

That, combined with an efficient local bus network, makes public transport a very viable option for getting to the Blue Mountains.

All main destinations, from Glenbrook to Lithgow, have train stations, and are serviced by the Blue Mountains train line, also known as the BMT line.

Use this super handy trip planner provided by Transport NSW to work out which train to catch from which platform at Sydney Central station to any of the stations in the Blue Mountains.

Tip 2!
If you’re travelling to Katoomba by train, it’s highly recommended to purchase a ticket for the hop on hop off Blue Mountains Explorer Bus. This bus, with highly knowledgeable drivers, will go past all the major attractions in the area.

Also read:
Best places to stay in the Blue Mountains.

Travel to the Blue Mountains by Bus

The third option to get to the Blue Mountains is by bus. Or rather, by coach, as an organised day tour from Sydney.

An organised day tour is a great option to experience the highlights of the Blue Mountains in comfort and style, without having to worry about your own transport or trains.

Most organized day tours also include a visit to Featherdale Wildlife Park, and a cruise over the Parramatta River returning back to Sydney, which is ideal for tourists visiting the Blue Mountains.

When looking for a suitable tour, it’s important to look at all inclusions and exclusions, vehicle type (coach or mini van), duration, reviews, and of course the actual tour operator. Most tour operators will pick people up in the morning from their hotels in Sydney.

FAQs About Getting to the Blue Mountains

Here are some of the most frequently asked questions about travelling to the Blue Mountains.