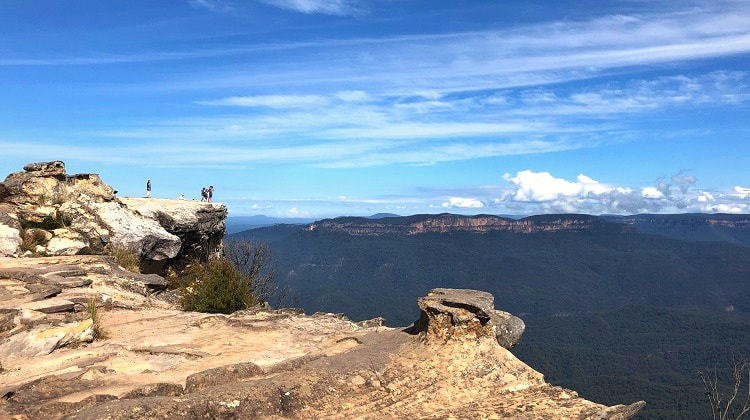 Located south of Wentworth Falls on the Kings Tableland plateau, Lincoln’s Rock is one of the most impressive lookout points in the Blue Mountains.

With sweeping views of Jamison Valley and beyond, Lincoln’s Rock is a unique and historically important sight that is well worth a visit.

You can either drive to the lookout, or you can do a pleasant 40 minutes bush walk to get there. Read on to find out more!

Driving to the Lincoln’s Rock lookout is super easy. It is located on Little Switzerland Drive at the end of Hordern Road in Wentworth Falls.

From the Great Western Highway, turn into Tableland Road. After 2 km, turn right into Hordern Road and drive until the end where it meets Little Switzerland Drive.

At that junction, turn right and you will end up at the reasonably sized Lincoln’s Rock car park (see map location).

Alternatively, if you feel like a bit of hiking, park your car on Chester Road (off Tableland Road) just north of Hordern Road (see map location).

From there, follow the Chester Trail and the Little Switzerland Trail to Lincoln’s Rock. It’s a pleasant and easy 40 minutes walk to the lookout.

The official address of the Lincoln’s Rock lookout:

The below map shows the two parking areas, one at the actual lookout and the other one on Chester Road where you’ll find the start of the Chester Trail.

The Kings Tableland is a plateau situated immediately south of Wentworth Falls in the Blue Mountains.

The plateau forms the eastern boundary of Jamison Valley, and extends south to McMahons Point lookout and beyond, with views over Lake Burragorang.

Kings Tableland is also one of the most historically important areas in the greater Blue Mountains region.

For many years, long before white settlement, the area that we now know as Kings Tableland, was a place of significance to the Aboriginal Gandangara people. Remnants of Aboriginal engravings and shelters can still be found in the area.

The most popular sight on the Kings Tableland plateau is Lincoln’s Rock, one of the most scenic lookout points in the Blue Mountains.

The lookout was named in honour of Lincoln Hall, a mountaineer who lived in Wentworth Falls for decades before his untimely passing in 2012.

On 25 May 2006, Lincoln Hall was left for dead at Mount Everest at an altitude of 8700m, as he was descending from the summit.

However, the next morning, Hall was found still alive by a team that was making a summit attempt, and he was rescued.

The panoramic views from Lincoln’s Rock overlooking Jamison Valley are unparalleled. But it’s not just the views though that attracts so many visitors to this lookout.

It’s also the unique photo opportunity, sitting on the edge of a cliff, that makes this spot so popular in the land of Instagram.

Make sure to also explore the southern section of the lookout, where you will find a path heading down to a secret vantage point.

Word of caution:
The Lincoln’s Rock lookout is absolutely stunning, but it is also unfenced. This adds to the beauty of the area, but it also makes exploring a bit risky. Stay well back from cliff edges at all times, especially when taking photos and selfies.

There are quite a few other interesting sights close to Lincoln’s Rock to enjoy so you can make a day of it.

One of Wentworth Falls’ best kept secrets is the Rocket Point Lookout, which offers fantastic views of the waterfall and the valley below.

Many visitors to Wentworth Falls skip this lookout, because it’s only accessible via a side-track away from the regular walking track above the waterfall.

To get to Rocket Point Lookout from Lincoln’s Rock, follow Little Switzerland Trail heading north. It’s an easy walk and takes about 30 minutes to complete.

Once you’re there, you may as well head down to have a closer look at the amazing waterfall that is Wentworth Falls.

The unsealed 4WD and cycle trail to McMahons Point from Wentworth Falls is on Tableland Road, approximately 20km south of Lincoln’s Rock.

It is located in a remote area of the Blue Mountains with limited to no reception, so it’s best to only go there if you’re well-prepared with a suitable vehicle.

From McMahons Point, you can enjoy sweeping views of Lake Burragorang and the Greater Blue Mountains wilderness. With a reservoir capacity of more than 2,000 gigalitres of water, Lake Burragorang has a surface area covering 75 square kilometres and is four times larger than Sydney Harbour.

The lake is formed by the Warragamba Dam, Australia’s largest concrete dam, and is Sydney’s primary reservoir for water supply.