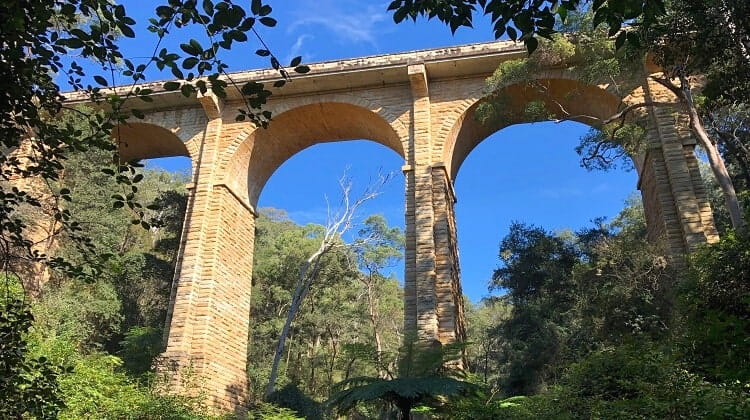 The historic Lapstone Zig Zag Walk is an exciting bushwalking track in Glenbrook that follows an old railway. This railway was built and used in the second half of the 19th century.

The walking track leads to the Knapsack Bridge, a huge sandstone arch viaduct which was built to carry the Zig Zag Railway line across the Knapsack Gully.

The walking track starts from the small car park at the very end of Knapsack Street in Glenbrook (see map location).

To get there, turn into Knapsack Street from the Great Western Highway. Look out for the big blue RAAF signpost.

An alternative way to get to the Knapsack Viaduct is via the car park at the start of Mitchells Pass further north in Glenbrook (see map location).

The walk from there to the viaduct follows the former Great Western Highway. This is an easy and flat walking trail.

The Lapstone Zig Zag was a railway section between the Emu Plains and Blaxland train stations on the Main Western Railway. The Knapsack Viaduct was built as part of this railway section.

The walking track to the viaduct is moderately challenging, with a few steep sections and some sections with rough surface. Wearing proper shoes is essential, and a bottle of water will come in handy too.

Once you’ve parked your car, head into the bush at the big signpost to start the hike to the Knapsack Viaduct along the old Lapstone Zig Zag railway line.

The path soon hits an intersection with the Quarry Lookout. This lookout isn’t spectacular by any means, but since it’s so close to the main track, you may as well go have a look.

The first historic landmark along the walking track is the old Lucasville railway station. It opened in 1877 to accommodate Australian politician John Lucas who owned a house close by.

That house, which was called Lucasville, is now gone but traces of its access paths and gardens are still visible. You might be able to find these remnants by walking up the concrete stairs at the station and heading into the bush.

After so many years of neglect, there isn’t much left of Lucasville Station today, but that’s also what makes this spot so intriguing.

Towards the end of the walking path, it’s time to start the descent via the Knapsack Stairs that leads to the top of Knapsack Bridge.

It’s quite a steep descent, consisting of more than 100 wooden stairs. Easy on the way down, but more challenging on the return trip back up.

By going down the stairs, you’re basically going from one section of the old zigzag railway line to another section lower on the escarpment.

4. Top of the Bridge

Once you’ve made it to the top of the bridge, it’s hard to imagine that this incredible piece of engineering was built nearly two centuries ago.

After the closure of the Lapstone Zig Zag railway in 1892, the viaduct was used as part of the Great Western Highway from 1926 until 1993 when the M4 Western Motorway was opened.

In 1995 the viaduct was reopened to the public as part of the Lapstone Zig Zag walking track that we’re discussing in this article.

For the best views of the bridge, it’s a must to do the walking trail that goes down to the gully. That’s where you get to see the bridge from below.

From the side of the bridge, at the bottom of Knapsack Stairs, follow the walking path that goes underneath one of the smaller arches.

As you make your way down into the valley to the Knapsack Gully crossing, the views of the bridge become better and better.

It’s a rather steep hike to the gully, but it’s quite a short section and the path is reasonably easy to navigate.

Once you’ve reached the bottom and you’ve crossed the gully, you have the option to continue the trail to the Elizabeth Lookout.

This lookout is pretty awesome with fantastic district views of Penrith and beyond. However, this does require a very steep hike out of the valley and up the hill.

Otherwise, simply retrace your steps back up to the top of the bridge, and then back to the car park via the Knapsack Stairs and the main walking track.

Keen to discover more of these unique places? Check out our list of beautiful hidden gems in Sydney for some great ideas.

About the Knapsack Viaduct

Some of the oldest roads into the Blue Mountains are still in existence today, such as Cox’s Road, Old Bathurst Road and Mitchells Pass, which includes the heritage listed Lennox Bridge.

The first railway into the Blue Mountains was the Lapstone Zig Zag railway, designed by John Whitton and built by William Watkins. In order to gain height and conquer the steep escarpment between Emu Plains and Blaxland, a zigzag design of the railway was deemed necessary.

This unique railway was constructed between 1863 and 1865, and officially opened in 1867. Part of this immense project was the construction of the Knapsack Bridge, a sandstone arch viaduct, to carry the railway across the Knapsack Gully.

The Lapstone Zig Zag was the first zigzag designed railway in the world that was built as part of a larger main-line railway.

While the Lapstone Zig Zag railway was considered a success, it was closed in 1892 as a result of the deviation of the Main Western Railway via Glenbrook.

This deviation was subsequently replaced by a second Glenbrook deviation, and the route of that second deviation is still in use today.

After the closure of the Zig Zig railway, the Knapsack Viaduct was still used as part of the first Glenbrook deviation. However, the viaduct was by-passed with the second deviation, and fell in disuse.

In 1926, the Knapsack Bridge received a second lease of life, as it became part of the former Great Western Highway.

This lasted until 1993 when construction of the M4 Western Motorway was completed, by-passing the former Great Western Highway. 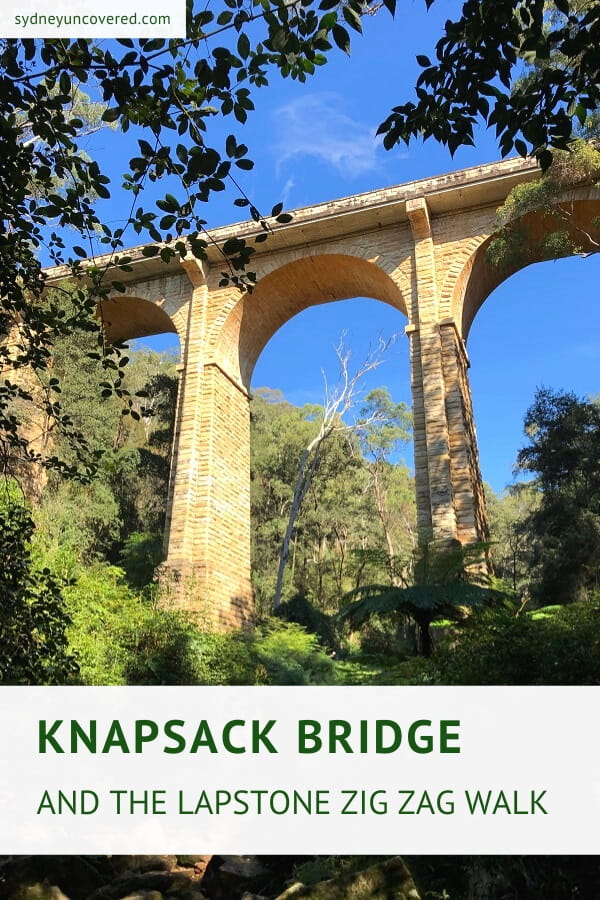