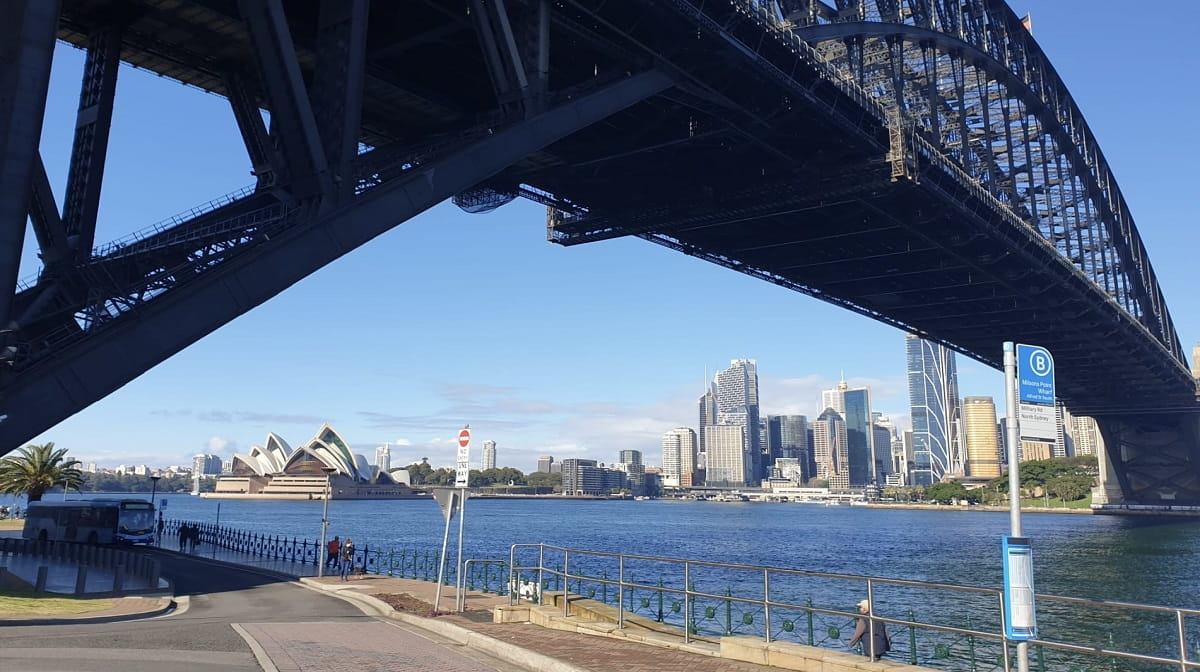 The Lavender Bay and Milsons Point circuit walk is a short but scenic walking trail on the lower north shore, offering stunning views of Sydney Harbour, the city skyline, and the Harbour Bridge.

Read on to find out more about this family-friendly walk and its highlights.

How to Get to Milsons Point

There are various ways to get to Milsons Point. The easiest way would be by train from the city on the north shore line.

You can also catch a ferry from Circular Quay and cross Sydney Harbour to Milsons Point ferry wharf, located opposite Luna Park and the North Sydney Olympic Pool.

Or, if you’re feeling a bit more adventurous, you can walk across the Harbour Bridge from the city and enjoy the views along the way.

The walking track as described below starts and finishes at Milsons Point train station.

While the walk is relatively short, it can take some time to complete as there are so many pretty sights and beautiful views to take in.

Let’s look at these highlights in a bit more detail.

From Milsons Point train station, head south towards the Harbour and cross Bradfield Park underneath the Sydney Harbour Bridge.

The park extends to the Broughton St Lookout, perhaps the most scenic lookout point in Sydney with panoramic views of the city skyline, the Opera House and the Sydney Harbour Bridge.

From the lookout, follow the picturesque walking path around the Milsons Point peninsula along the shoreline while enjoying incredible city and Harbour views.

The path continues under the bridge towards Luna Park and the historic North Sydney Olympic Pool.

Opened in 1936, the iconic, art deco-style swimming pool complex includes a 50m outdoor pool, a 25m indoor pool, a professional gym, and a sauna and spa.

Swimming in the outdoor pool with views of the Harbour Bridge is quite a unique experience.

Listed on the NSW Heritage Register, the park’s prominent Harbour location and unique architecture give it a special place in the hearts of Australians and visitors alike.

Before Luna Park was established, the location was used as an industrial site to support the construction of the Sydney Harbour Bridge.

Upon completion of the bridge in 1932, the North Sydney Council opened applications for tenders to develop the site.

The development of Luna Park at the foot of the Sydney Harbour Bridge began in 1935, and the park opened to the public on 4 October in that same year.

Until 1972, Luna Park was closed during the winter months each year to allow for essential maintenance and upgrades.

Following the Ghost Train fire tragedy in 1979 which killed seven people, Luna Park was immediately closed and partly demolished. After an extensive redevelopment, the park reopened under the name Harbourside Amusement Park in 1982.

The park endured a series of safety, noise pollution and financial issues in the 1980s and 1990s, which resulted in another redevelopment at the start of the 20th century. Luna Park finally reopened in 2004 under new ownership and has continued operating ever since.

You can continue the walk through Luna Park (free entrance) or otherwise via the boardwalk that follows the foreshore of Lavender Bay.

When walking along the picturesque Lavender Bay foreshore, you will notice an old rail line that follows the shoreline between Luna Park and Quibaree Park at the north end of the bay.

It was first opened to the public in 1893 as an extension to the North Shore Rail line between Waverton and Hornsby.

This section of the North Shore Line closed in 1924 in preparation for the Sydney Harbour Bridge, and in 1932 the main rail line was routed over the bridge. Today the Lavender Bay rail line is used for stabling trains and training purposes.

At the north end of the bay, climb up the steep stairs to discover Wendy’s Secret Garden.

One of Sydney’s worst-kept secrets is Wendy’s Secret Garden, a green oasis of native plants, fig trees, beautiful flowers and a thriving community of birds.

But while most of us are familiar with Wendy’s Secret Garden, many Sydney-siders have yet to visit this beautiful and unique spot on the lower north shore.

Created in 1968 by artist Wendy Whiteley, this beautiful garden has been featured on the radio, television, newspapers, and blogs countless times since its inception.

After her ex-husband, Australian artist Brett Whiteley, died in 1992, Wendy decided to transform a derelict piece of land into a beautiful garden.

With the ashes of her husband and daughter buried in the garden, Wendy has continuously maintained and beautified the garden for us all to enjoy.

The garden is a beautiful place for office workers and residents to wind down, eat lunch, read a book, or enjoy the views.

Dogs are welcome in the Parklands, albeit with a few minor restrictions. You can find more info about the Lavender Bay Parklands on the North Sydney Council website.

Keen to discover more walks and interesting sights on Sydney’s lower north shore? Have a look at Balls Head Reserve, or Berry Island Reserve, both very close to Lavender Bay.

If you enjoy this type of walk, be sure to check out our list of pretty bay walks in Sydney. All of these walking trails are relatively easy and offer panoramic views.

In the below map, the Lavender Bay circuit walk starts and ends at Milsons Point train station. Walk across the bridge or catch a train or ferry to Milsons Point.

Limited (and mostly paid) street parking in the area is available but can be hard to find on the weekends.