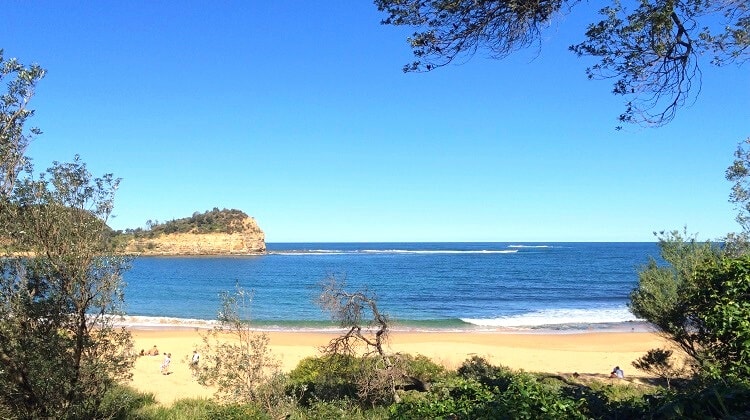 The Maitland Bay Track is a short but steep bushwalking trail in Bouddi National Park that winds its way down from the Information Centre to the stunning and isolated beach of Maitland Bay.

Be mesmerised by the beauty of the national park as you hike through lush rainforest to the yellow sand of Maitland Bay.

Stroll further along the beach to Bouddi Point, and discover some of the remains of an old shipwreck!

The Maitland Bay Track is located in the southern part of the Central Coast, approximately 90 minutes driving from the Sydney CBD.

The quickest way to get there from the M1 Motorway is via Woy Woy Road to Woy Woy, followed by Maitland Bay Drive, Empire Bay Drive, Wards Hill Road and The Scenic Road to the Information Centre.

Parking is available near the Information Centre located at the intersection of Maitland Bay Drive and The Scenic Road in Killcare Heights (see map).

Before you start the Maitland Bay walking track, it’s worth paying a visit to the small and charming information centre.

The building was once the Old Maitland Store and residence, one of the earliest homes in the Killcare Heights area.

The store was associated with the history of Bouddi National Park and the development of Killcare Heights.

The information centre is open from 11am until 3pm on the weekends and on public holidays. Facilities include a parking area, a public phone, and a drinking fountain.

The park is home to various exciting bushwalks, several campgrounds, and some of the most beautiful and most secluded beaches you can find in the state of New South Wales.

One of those bushwalks is the Maitland Bay Track, a popular walking trail that starts from the information centre and leads to the picture-perfect beach of Maitland Bay.

The starting point of this track is about 100 metres south of the information centre, not to be confused with the start of the Stroms Trail right next to it.

This well maintained track is just under 2 km long (return) and does have a few steep sections.

As you make your way down through the forest, you get to enjoy great views of Maitland Bay, Bouddi Point and the ocean.

Be mindful though that while going down to the beach is very easy, going back up can be a bit of a challenge, especially for young children.

It takes around 20 minutes to get to the beach, but it will take twice as long to get back up to the car park via the steep walking path.

Maitland Bay itself is a beautifully secluded beach in Bouddi National Park.

On a typical Sunday you won’t easily find more than a handful of people on the beach, which can be quite refreshing.

Keep in mind though that Maitland Bay Beach is unpatrolled, so please be careful if you’re planning to go for a swim.

From the beach, it’s recommended to continue hiking to Bouddi Point at the eastern end of the beach.

Not only are the views fantastic along the way, you will also be able to discover some remnants of an old shipwreck.

Remains of the S.S. Maitland Shipwreck

In May 1898, the coastal paddle steamer S.S. Maitland ran aground at the eastern end of Maitland Bay during a vicious storm.

Remembered as the “Maitland Gale”, this storm caused the sinking of several other ships along the coast of New South Wales, but the Maitland disaster claimed the most lives.

More than 120 years later, some of the remains of this shipwreck are still visible at low tide.

It’s definitely worth walking the extra stretch from the end of the Maitland Bay Track to Bouddi Point to discover these historic remains.

It’s fascinating to see, and makes you think about what the passengers and crew on board the S.S. Maitland must have gone through on that fateful night.

On Saturday 14th October 1961, a monument was dedicated to commemorate the sinking of the S.S. Maitland as a maritime disaster.

The monument stands right next to the information centre, and is a replica of the bell of the ship.

The bay was previously known as Boat Harbour, but was renamed Maitland Bay following the disaster.

There are lots of walking tracks to choose from in Bouddi National Park, with some of them close to, and connecting with, the Maitland Bay Track.

One of the longest walking tracks in the national park is the scenic 8 km Bouddi Coastal Walk, between MacMasters Beach and Putty Beach, and also includes Maitland Bay.

With panoramic ocean views from start to finish, and beautiful beaches and several lookouts to take in, the Bouddi Coastal walk is a fantastic adventure.

The short but very scenic Mount Bouddi Walking Track starts from the Mount Bouddi (Dingeldei) picnic area, and meanders through beautiful bushland to the Bouddi Lookout.

Similar to the Maitland Bay Track, the Bullimah Spur Track also starts from the Bouddi National Park information centre, and heads south towards the Bullimah Outlook.

The views from the Bullimah Outlook to Putty Beach, Box Head, Broken Bay, Lion Island and Palm Beach are absolutely stunning and very much worth the effort.

Have a look at our list of best walks in Bouddi National Park for more hiking ideas in this beautiful area north of Sydney.