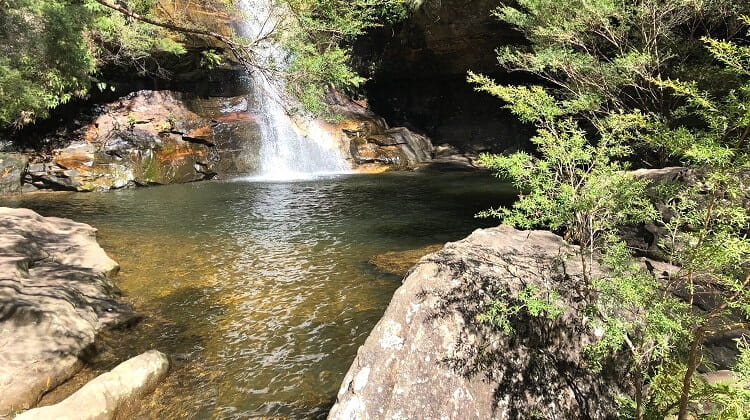 Minnehaha Falls is a small but very pretty waterfall on the Yosemite Creek in the Katoomba area of the Blue Mountains.

A short walking track through a scenic landscape leads to the base of this waterfall, with scenic views to enjoy from start to finish.

Keen to discover more waterfalls? Check out our list of the most beautiful waterfalls in the Blue Mountains, including details on how to find them.

The waterfall we’re discussing in this article goes by many names, such as Mini haha, Minne ha ha, Minni ha ha, and the list goes on.

The official name however is Minnehaha Falls. But you may find it challenging to locate it on navigation systems, and the small car park at the start of the walking track certainly isn’t the easiest to find.

The car park is located at the very end of Minni Ha Ha Road in North Katoomba (see map location).

A signpost and a large grassy area with picnic tables awaits you, when you approach the car park at Minnehaha Falls Reserve.

The walking track to Minnehaha Falls is approximately 1.5 km in length. It’s a fairly easy walk, but there are sections where the surface is a bit rough, in addition to a couple of steep sections.

Anyone with a reasonably level of fitness should be able to easily complete this walk. It’s important though to wear proper shoes, for your own safety and comfort.

Once you’ve parked your car, have a look at the information board to read more about the history, geology, vegetation, flora and fauna of the reserve.

This information board marks the start of the walking track to Minnehaha Falls.

The walking track essentially follows Yosemite Creek, which eventually drops into the valley as Minnehaha Falls.

Not too far from the start of the walking track is an intersection where you can turn left to have a closer look at the creek.

There is also a small cascading waterfall to be seen, so it’s definitely worth doing this short detour before continuing on the main track.

Once you’re back on the main track, it’s a pretty straightforward path to follow, with great views to soak in of the waterfall and surrounding scenery from high up.

Not long after the waterfall first becomes visible from the walking track, it is time to start the rather steep descent into the valley.

This is a section with various staircases and steps heading down. It’s certainly steep, but this part of the track has recently been upgraded and it isn’t too hard to conquer.

The last stretch to the waterfall is fairly easy to do, with interesting rock formations on your left and the flowing of the creek on your right.

The waterfall that is Minnehaha Falls is a beautiful sight, especially after a period of heavy rain when more water passes through the creek.

Swimming in the pool at the base of the waterfall is a great experience, especially on a warm summer’s day.

The pool is easily accessible and and it’s reasonably safe, you just need to be mindful of slippery surfaces.

If you cross the creek and do a bit of rock scrambling to get to the other side of the pool, you can get the best views of the entire waterfall.

Once you’ve finished admiring the waterfall, simply retrace your steps out of the valley and back to the car park.

The area surrounding Minnehaha Falls has quite an interesting history, and is also of historical significance to the local Aboriginal people.

Towards the end of the 19th century, the area slowly turned into a popular spot for tourists to go hiking and to visit the waterfall.

This eventually led to the establishment of the Minnehaha Falls Reserve in 1895, with the goal to preserve the waterfall and the area that surrounds it for future generations.

The first official track to the waterfall was established at the beginning of the 20th century. It was constructed by a contractor named John Cliff, who also constructed the historic Rodriguez Pass near Blackheath.

Because of the instability of the soil along the route, maintenance of this walking track proved to be a challenge. This resulted in the track being severely neglected over the years.

In 1991 the Minnehaha Falls Landcare Group was formed, and since then the walking track and the reserve have been through a series of much needed upgrades.

More waterfalls to visit nearby: