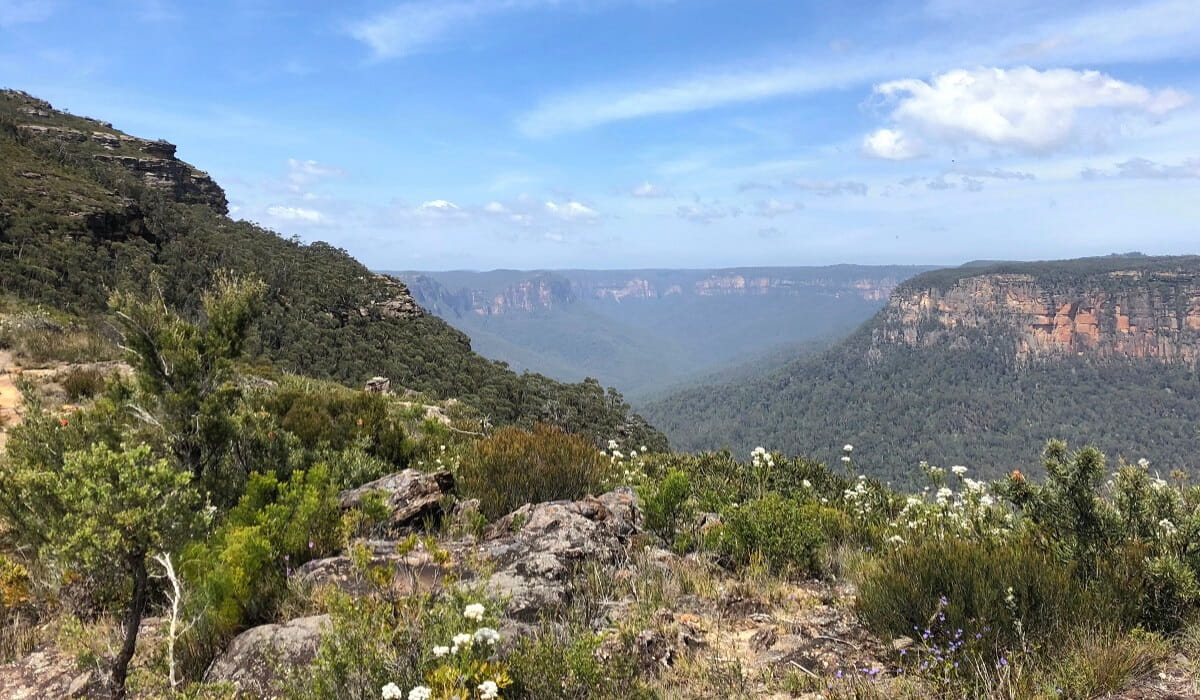 Mount Banks, with its distinctive rounded peak, is one of the most recognisable landmarks in the greater Blue Mountains region.

Mostly overlooked by tourists, the hike to the summit of Mt Banks offers beautiful views of the surrounding area, a part of the Blue Mountains that is still a bit undiscovered.

In this guide, we’re going to discuss the two trails that go to the summit of this mountain peak, and how best to find these trails.

How to Get to Mount Banks

From Bells Line of Road, turn into Mount Banks Road at the big signpost. Please note that Mount Banks Rd is a 1 km unsealed dirt road, but can certainly be negotiated by a conventional 2WD vehicle. Just be cautious, especially after a period of rainfall.

Once you’ve parked your car, look out for the sign that marks the starting point of the hike up to Mount Banks.

Hiking to the summit of Mount Banks can be done in two ways:

The first track roughly follows the cliff edge all the way to the summit, while the second walking track follows the extension of Mount Banks Road.

This map shows both walking trails:

The first option is the shortest and most scenic walking track but it is also very steep. The views of the valley and the various nearby mountain peaks are absolutely breathtaking.

The second option is a bit longer and is not as steep, but it doesn’t offer any good views at all. It’s mainly just the dirt road, without the valley views.

Therefore, the first option is definitely the best option. But if you’d like to do a longer walk, you can also combine the two trails and turn it into a circuit walk.

The intersection of the two walking tracks is clearly signposted just before the top of the mountain.

Please note that the signpost at the car park is a bit confusing.

If you’re choosing the shorter walking track to the summit, you will need to look for the path that starts behind the big rock.

With an elevation of 1,049 metres, Mount Banks is an iconic mountain peak located within the Explorers Range of the Blue Mountains region, along the northern escarpment of the Grose Valley.

Millions of years ago, large parts of what is now the Blue Mountains region was covered with volcanic lava flows resulting in layers of basalt.

While erosion has removed most of these basalt layers, in some places the basalt has actually remained.

Mount Banks is one of those peaks where the basalt is still present, creating a fertile soil that supports a rich vegetation that is different from other parts of the Blue Mountains.

This is why the summit of Mt Banks is populated with lots of trees.

The mountain was named after Sir Joseph Banks by George Caley, an English botanist and explorer and the first European settler to reach the Mt Banks summit in 1804.

Joseph Banks was an English naturalist and botanist who employed George Caley as a botanical collector in New South Wales at the end of the 18th century.

Standing on top of Mount Banks may be a bit of a disillusion. There are no 360 degree views as one would typically expect to enjoy on top of a mountain, such as at the Mount Kosciuszko summit.

The top of Mt Banks is very different. It is actually covered with a tall, thriving forest of monkey gums, with a triangulation station erected in the centre.

So hiking to the summit of Mt Banks is about the achievement, not so much about the amazing views from the top.

Having said that, the views along the way to the summit are absolutely beautiful, and show a different side of the Blue Mountains where not many tourists go.

Wildlife also thrives at Mount Banks, with wombats, mountain goats and lots of different types of birds claiming this area as their home.

Once you’ve made it to the summit, you can either retrace your steps back to the car park via the same trail, or you can make it a circuit walking track by returning via the second trail.

Simply look out for the intersection as per the above image, and follow the other trail back to the car park at the picnic area.

The hike to the summit of Mt Banks is one of the many things to do in this part of the Blue Mountains. Check out our guide to the Bells Line of Road for a complete list of hikes and sights nearby.