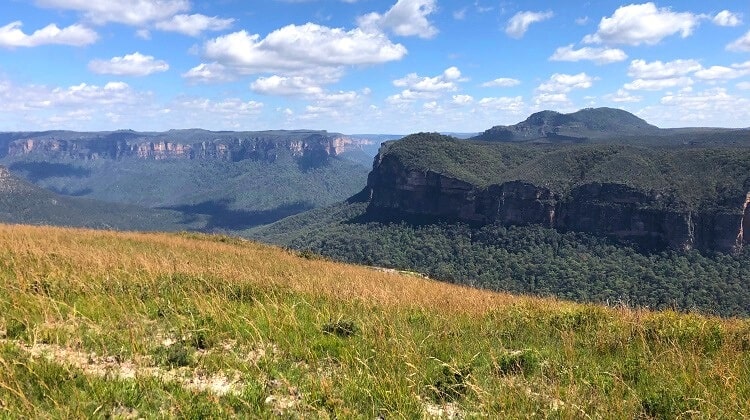 The walking track to Mount Hay is a short but rather steep hike to the summit of a recognisable mountain peak in an isolated part of the Blue Mountains.

You can get there by driving to the end of Mount Hay Road, a somewhat notorious unsealed road that can be considered an adventure in its own right.

Nearby Butterbox Point is a must-visit too, which offers stunning views of the Grose Valley and the surrounding cliff walls.

Mount Hay Rd is accessible from the Great Western Highway, near the Leura Mall exit. The first 3 km of this road are sealed, followed by 13 km worth of unsealed road.

While you may find sources online saying that Mount Hay Rd is doable for 2WD vehicles, we strongly recommend only going there with a 4WD vehicle.

The road is very long and has a lot of nasty potholes, and going there with a car with higher ground clearance is essential.

In the above map:

The starting point of both walks is at the northern end of the carpark.

Once you’ve reached the carpark at the end of Mount Hay Rd, look out for the information board where you can read more about this unique area in the Blue Mountains.

The start of the walking track is right next to this information board, with Mount Hay visible in the distance.

The path to the summit of Mount Hay is fairly easy to follow, but there are a few sections where you might go a bit off track. But with the summit always in sight, you won’t get lost all that easily.

Not too far from the starting point of the walk is an intersection with the Butterbox Point track. If you’re heading to the summit of Mount Hay first, simply keep going straight.

As you get closer to the summit, the vegetation also becomes denser. Similar to Mount Banks further north, Mount Hay is a basalt-capped mountain due to volcanic lava flows that occurred millions of years ago.

This basalt creates highly fertile soil resulting in rich vegetation at the top of the mountain. This also means the views from the top are mostly obscured by trees.

So for that reason, you don’t necessarily need to go all the way to the summit to make the most of this hike.

The views of the surrounding valleys and cliffs are fantastic straight from the beginning of the track, and it’s up to you how far you wish to walk.

Once you’ve finished admiring the views on the Mount Hay Track, simply retrace your steps back to the intersection with the Butterbox Point walking track for chapter two in this adventure.

The Mount Hay summit walk is very similar to the Mount Banks summit walk, both in length as well as in scenery. The start of this hike is on Bells Line of Road in the Mount Wilson area of the Blue Mountains.

At the intersection, make your way westbound to Butterbox Point. The views along this track and at Butterbox Point are arguably even better than those along the Mount Hay summit walk, so you will be in for a treat.

It’s important to point out that there are sections where this track becomes very narrow along the cliff edges. As such, it’s crucial to be careful at all times, even more so in wet and windy conditions.

From the first intersection, the track soon hits a second intersection with a track that provides access to the Butterbox Canyon.

At this intersection, stay on the main path going to Butterbox Point.

The walking track then arrives at a rather interestingly shaped rock formation with a cave structure at the bottom. At this point, the track splits in two with both sections rejoining at the other side of the rock formation.

You can choose to go either way, but choosing the path on the right means you’re going to be very close to the cliff edge, which is quite scary and a bit dangerous. Not recommended.

If the walking track overall is a bit wet, or if it is windy, the strong recommendation is to choose the left path, just to avoid any dangerous situations.

Once the two paths rejoin, the track ultimately ends up at Butterbox Point from where you can enjoy even more panoramic Grose Valley views.

If you’re keen to do more walks in the area, the Lockleys Pylon walking track is strongly recommended. The start of this hike is on Mount Hay Rd and leads to a hill with fantastic Grose Valley views. Another great hike is the Fortress Ridge Trail, which also starts from Mount Hay Rd.