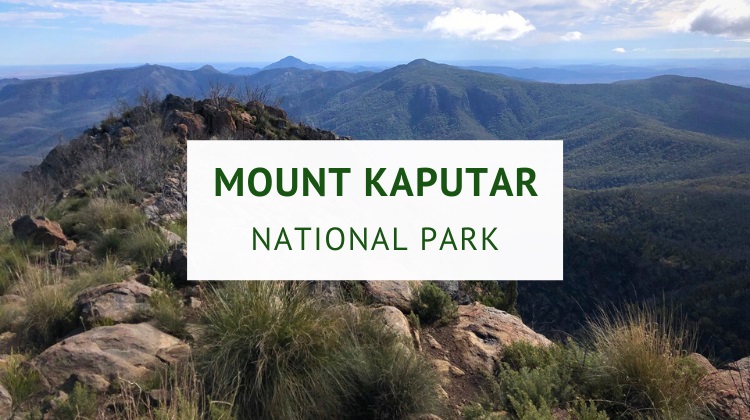 Mount Kaputar National Park is located in the North West Slopes region of New South Wales, and is characterised by a dramatic volcanic landscape of steep ridges, narrow valleys, and unique rock formations.

The centrepiece of this beautiful national park is Mount Kaputar, a mountain that was once part of an active volcano, with an elevation of 1,500 metres above sea level.

In this article, we’re going to list the top eight walks and lookouts in Mount Kaputar National Park, to help you plan your next weekend escape.

The local Aboriginal people of the Mount Kaputar area are the Kamilaroi people (also known as Kamilaroi, Kamillaroi, or Gamilaroi), whose traditional country extends from the Hunter Valley to Central/North West NSW and Southern Queensland.

The park was a rich resource for food, shelter, medicines, and weapons, and Aboriginal rock carvings and remnants of campsites can still be discovered throughout the national park.

Before it became a National Park in 1959, the area was mostly used for sheep and cattle farming. The area was very isolated and offered harsh conditions, which changed when the road to the summit of Mount Kaputar was finally completed in the 1960s.

Today, Mount Kaputar National Park is an attractive destination for outdoor enthusiasts, with lots of walks, lookouts, and cycling and 4WD trails to explore, in addition to various camping and picnicking spots.

Narrabri is the perfect town to use as a base to explore Mount Kaputar National Park. But there is so much more to Narrabri, so check out our guide to things to do in Narrabri and surrounds for a complete list of activities and attractions.

The park can be divided into two sections:

Both of these sections can be accessed via the town of Narrabri:

In the northern section, the main attraction is the Sawn Rocks walking track.

In the southern section, the main attractions are the Mount Kaputar Summit, the Yulludunida walking track, and the Governor Lookout walking track.

In addition to the northern and southern sections, there is a third section, which is the more isolated Waa Gorge area. This area is located north of the Sawn Rocks area and is home to the challenging Mill Bullah and Waa Gorge walking tracks.

Note that the main roads into the northern and southern sections are sealed, apart from a 20+ km stretch in the Kaputar Plateau. A 4WD vehicle is recommended, but a 2WD vehicle can also be used.

Our list of highlights starts with Sawn Rocks, in the northern section, from where we travel to the southern section, which includes the Mount Kaputar Summit Lookout.

You will need two full days to explore all of the below eight highlights. If you only have one day to spend in Mount Kaputar National Park, we recommend the following itinerary:

It is a large cliff face that resembles a wall of giant organ pipes, formed as a result of volcanic activities. A short walking track starting from a picnic area leads to a lookout from where visitors can see the entire rock formation.

From the lookout, the path continues down to the gully floor where various gigantic pentagon-shaped boulders (that have broken off) are spread out, and walking through this area is quite a surreal experience.

The walking track to the Sawn Rocks lookout is paved and marked as wheel-friendly, although the path is not entirely flat and has a few bumps.

The picnic area at Sawn Rocks can be accessed via Killarney Gap Road, a 30-minutes drive from the Narrabri town centre.

The challenging Yulludunida Walking Track is the first highlight in the southern section of the national park and is more than worth the effort.

This adventurous 4 km return walk goes up the side of a cliff towards a mountain’s crater, with a bit of volcanic rock scrambling at the top.

The views along the way and at the top are breathtaking, but the walk is mostly suitable for experienced and fit hikers and bushwalkers.

You may also encounter some wildlife, such as eagles, lizards, and mountain goats, which adds to the experience.

The Euglah Rock Walking Track is a short, family-friendly trail that leads to a lookout offering scenic views of a volcanic outcrop named Euglah Rock.

The walking track is less than 1 km return and starts from the Bark Hut camping ground.

Euglah Rock is a typical example of an isolated volcanic rock formation created by water and wind erosion over millions of years.

Blue Mountain Creek runs parallel to the walking track and after some heavy rain, you will hear the sounds of a waterfall at the lookout.

The Doug Sky Lookout is a small lookout on Kaputar Road with a wooden viewing platform that offers scenic views of Euglah Rock and beyond but from a different angle.

It’s a great lookout for a quick stop on your way to the summit of Mount Kaputar, with views that can stretch as far as the Pilliga Forest on a clear day.

There is a small parking area located right behind the lookout, and no walking is required to get there.

Also known as Corrunbral Borawah, The Governor Lookout Walking Track is a 2 km return walk that first leads to a lookout with panoramic mountain views.

From that lookout, the track continues via boardwalks, ladders, and sections of rock scrambling to the summit of The Governor, a large rock formation.

From the summit of The Governor, the 360-degree district views of Mount Kaputar National Park are stunning, and one could easily spend an hour there to take it all in.

The starting point of this exciting walking track can be accessed from Kaputar Road, located just before the Mount Kaputar Summit.

The West Kaputar Lookout is an unfenced viewing point on Kaputar Road, a great warmup for the Mount Kaputar Summit Lookout further east.

The lookout offers impressive views of the basalt cliff walls of the West Kaputar rock formation on one side, and far-stretching district views straight ahead.

The West Kaputar Lookout can be accessed from Kaputar Road, with no hiking required to reach the lookout.

A wooden staircase leads to the summit from where visitors can soak in panoramic 360-degree views. It is believed that on a clear day, one can see 10% of New South Wales from the summit.

The Mount Kaputar Summit Lookout is located towards the end of Kaputar Road, where you will find a small parking area with picnic tables.

The walking trail to the lookout is very short and easy, with a large viewing platform offering lots of room to move around and enjoy the views.

The last highlight in Mount Kaputar National Park is the Bundabulla Circuit Walking Track, which can be accessed by driving to the end of Kaputar Road.

It’s a scenic 3 km loop with various lookout points along the way to explore, such as the Eckfords Lookout and the Bundabulla Lookout.

It’s a relatively easy walking track through a diverse landscape with the chance to encounter some wildlife too.