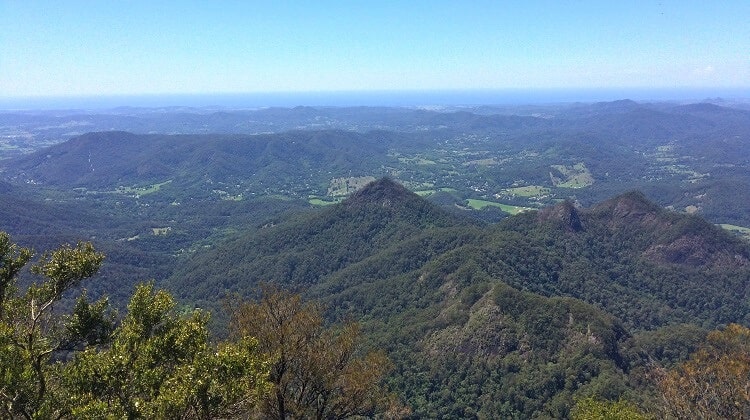 Wollumbin, otherwise known as Mount Warning, is a characteristic and recognisable mountain peak in Wollumbin National Park in the Byron Bay Hinterland.

The Mount Warning summit trail is a challenging 9 km bush walking track that brings hikers all the way to the top of the mountain, offering panoramic 360 degree district views.

In Murwillumbah, turn into Riverview Street which flows into Kyogle Road. After about 12 km, turn right into Mount Warning Road.

Keep going straight past the Mt Warning Rainforest Park sign until you get to the Wollumbin car park (see map location).

The toilet block at the car park is the only toilet facility in the national park. Just something to keep in mind if you’re planning to hike all the way to the summit of the mountain.

Update 2022:
Please note that Wollumbin National Park is closed due to safety issues on the Mount Warning summit track. For the latest updates, check the alerts on the NSW National Parks website.

Known as Wollumbin by the people of Bundjalung, Mount Warning has always been an important part of Aboriginal culture.

It was named Mount Warning by Captain Cook in 1770, after his ship Endeavour nearly hit reefs at Point Danger near Tweed Heads, 50 km north east of Wollumbin.

Wollumbin was once part of the Tweed Volcano, a partially eroded shield volcano that has left ancient old rock formations behind.

The mountain used to be almost twice as high as it is now, but millions of years of erosion has caused the mountain to shrink and form a characteristic sharp peak. The height of Mount Warning is now established at almost 1,200 metres above sea level.

World Heritage-listed Wollumbin National Park is rich in plant, bird and animal life. Two walking tracks, the Mount Warning summit track and the Lyrebird track, give visitors the opportunity to take in the beautiful scenery in this national park.

A note about climbing Mt Warning:
Wollumbin is a sacred place of great significance to the people of Bundjalung. The area provides a traditional place of cultural law, initiation and spiritual education. Under Bundjalung law, only specifically chosen people are allowed on the mountain. Climbing Mt Warning is against the wishes of Bundjalung elders. Visitors are asked to respect the cultural and historical significance of Wollumbin.

Thousands of bushwalkers undertake the challenging track to the summit of Mount Warning each year. But despite its popularity, this walking track is certainly not for everyone.

It’s a tough track with very rocky surface from start to finish and some very steep sections. The last 200m even involves some rock scrambling along chains to get to the summit.

Once you’re there, on top of the mountain, the beautiful panoramic views of the ocean, the Gold Coast, and the Byron Bay Hinterland will make you quickly forget about the effort it took to get there.

There are several lookout areas with seating that provide clear 360 degree views, perfect for a well deserved picnic.

The total length of the track is 9 km (return) and zigzags its way to the summit through the subtropical and temperate rainforest. Along the way are several lookout points where you can have a break and enjoy the views.

There are also five emergency helicopter points on the track, allowing rescue teams quick access in case of any emergencies that, unfortunately, do occasionally happen.

As the walk will take anywhere between 3 and 6 hours, it’s best to start climbing early, when the temperature is more pleasant during the summer months.

Also note that in winter months, you’re not supposed to climb in the afternoon as it gets dark very quickly. People have actually become lost due to the darkness on the return journey.

Important safety considerations:
The Mount Warning summit trail is regarded as a tough and risky walking track. There are several helicopter rescue spots installed on the mountain, but every rescue operation is not only expensive, it is also dangerous for the rescue team involved.
Don’t climb Mount Warning in the afternoon as it gets dark really quick. Don’t climb if you’re unfit or have medical conditions. Bring enough water and snacks with you. Wear suitable hiking shoes because the surface is rough all the way. Don’t camp on top of the mountain. Don’t attempt to climb Mount Warning if bad weather is predicted. Always keep to the track, because shortcuts can cause erosion. If you’re going by yourself, let someone know about your plans.

If climbing Mount Warning is not an option, the much shorter Lyrebird Track is a good alternative.

Less then 1 km in length, the Lyrebird track starts at the same point as where the Mount Warning summit track starts.

Great for bird watching, this easy bushwalk takes visitors across Breakfast Creek through subtropical rainforest to a small but scenic viewing platform.

Check out our guide to things to do in the Byron Bay area for the best activities and sightseeing tips in this beautiful part of New South Wales.