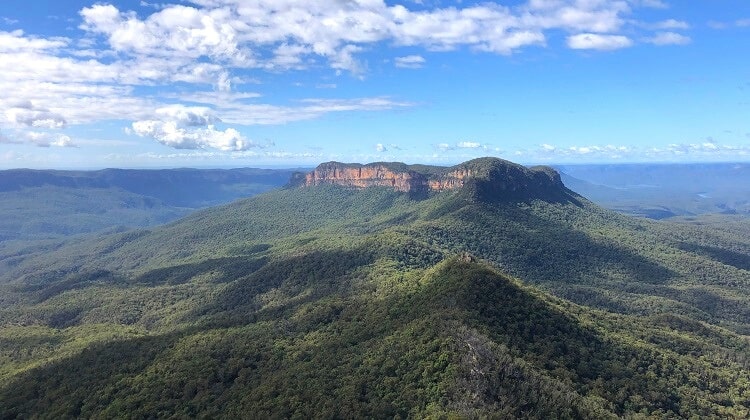 A short walking track starting from Glenraphael Drive on the Narrow Neck Plateau in Katoomba leads to a scenic lookout on Castle Head, which offers spectacular 360 degree district views.

Various landmarks are visible from the lookout, such as the Three Sisters, Mount Solitary and Ruined Castle, surrounded by Jamison Valley and Cedar Creek Valley.

Update March 2022:
Please note that Glenraphael Drive is currently closed due to a landslide which means the walking to Castle Head is not accessible. Check the NSW National Parks website for the latest updates.

Narrow Neck and Castle Head are located in the Katoomba area of the Blue Mountains, not too far away from Scenic World and Echo Point.

To get there, turn into Glenraphael Drive from Scenic Drive, and stay on this road until it arrives at a gate with a car park (see map location).

Note that this car park is further away than the car park for the Golden Stairs and the walking track to Ruined Castle.

Glenraphael Drive is a dirt road that does have potholes, ruts and corrugations. While the road is manageable by 2WD vehicles, a 4WD is strongly recommended because of the higher ground clearance.

Below is a map with the walking track starting from the unofficial Glenraphael Drive car park all the way to the Castle Head Lookout.

About the Narrow Neck Plateau

The Narrow Neck Plateau, otherwise known as the Narrow Neck Peninsula, is a plateau south-west of Katoomba that forms a divide between the Megalong Valley and the Jamison Valley.

Glenraphael Drive runs on top of the Plateau, and evolves into the Narrow Neck Plateau Trail, a management trail that leads all the way to the southernmost point of the peninsula.

This management trail is popular with both hikers as well as cyclists, and offers beautiful views of an area of the Blue Mountains that is not so high-trafficked.

Castle Head is essentially a small headland on the eastern side of the Narrow Neck Plateau, with a scenic lookout facing Mount Solitary and Ruined Castle.

And it’s that scenic lookout we’re going to explore today!

The track to the Castle Head Lookout is rather short (4.5 km return from the gate on the road), but there are a few mildly steep sections and various sections with rough surface to conquer.

Overall though, it’s not a difficult walk, and anyone with a reasonable level of fitness should have no issues completing the track.

The first part of the walk is on the management trail past the gate at the car park.

After a short while, the trail arrives at an intersection with the Castle Head Track, where you need to turn left into the bush (see picture above).

After a little bit of climbing and descending, the track passes an unofficial lookout that offers incredible views of the Jamison Valley.

If you look closely from this lookout, you might be able to identify the Three Sisters, and the Kings Tableland plateau further east.

Before the track ends up at the destination, the lookout at Castle Head, it passes an old trig station, which (we assume) marks the summit of the headland.

From this trig station, it’s only a short walk through low growing vegetation to reach the lookout.

The views from the lookout are absolutely breathtaking with various landmarks, mountains and valleys clearly visible.

Straight ahead you should be able to identify the Ruined Castle, with Mount Solitary right behind it.

The valley on the left (east) is the Jamison Valley, and the Cedar Creek Valley (west) is located on the opposite side.

The Cedar Creek Valley is essentially located between Castle Head and the southern part of the Narrow Neck Peninsula.

On the other side of Narrow Neck is the Megalong Valley, which you can’t actually see from the Castle Head lookout.

Before you head out to do this walk, it’s worth exploring the map beforehand, so that you can better identify all these landmarks once you’re at the lookout.

Once you’ve finished admiring the views from Castle Head, simply retrace your steps back to the management trail and the parking area.

If you do have time and energy left, you could continue on the Narrow Neck management trail to the southernmost point of the peninsula. This isn’t a hard walk by any means, but with almost 10 km it is quite long.

You can read more about this Narrow Neck walking trail on the NSW National Parks website.

Nearby walks and sights: