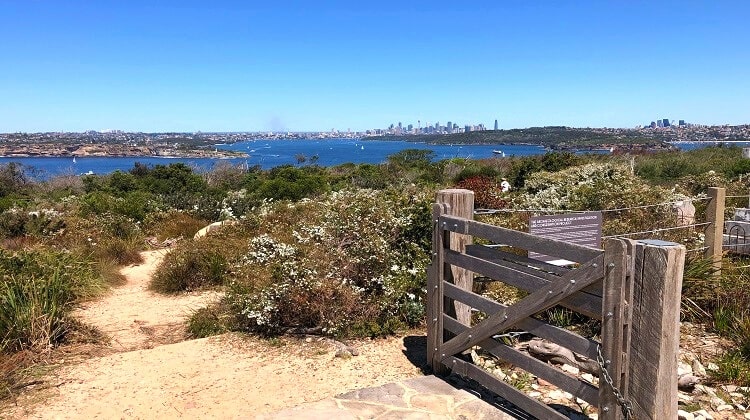 The North Head Walk in Manly is one of Sydney’s most fascinating walking tracks, with lots of history, panoramic views, and scenic beaches to take in.

What’s great about this outdoor adventure is that it is both a coastal and bush walk. And while it is a rather long walking track, it is suitable for all ages and fitness levels.

A bonus is that the starting and end points are both in Manly, which makes the ferry the perfect means of transport.

The best way to get to Manly to do the North Head Walk is by ferry.

The North Head Walk is essentially a circuit walk that starts and ends in Manly, and the ferry wharf is an excellent location to start this hike.

The ferry ride to Manly is one of the most scenic ferry trips in Sydney Harbour and really adds to the experience. Plus, there is no need to worry about finding a parking spot in Manly.

If you want to drive to Manly, there are several large car parks in the centre of town, most of them managed by the city council.

They typically provide two hours of free parking, but it can get a bit expensive after those two hours. Just keep in mind that the walk will take at least 3 hours.

North Head is traditionally known as Car-rang-gel and has always been a place of significance for the Gayamagal people. It was a place used for ceremonies and medicinal practices.

In the 20th century, during WWII, North Head was used as a military site to defend Sydney and New South Wales. As such, North Head became one of the most heavily fortified sites in Australian history.

Today, North Head is home to the North Head Sanctuary, a protected area managed by the Sydney Harbour Federation Trust. It’s a fascinating place to visit, with great views and lots to learn about Sydney’s military history.

The North Head Walk is the second section of the Manly Scenic Walkway, which also includes the Spit Bridge to Manly Walk as the first section.

In this guide to the Manly North Head Walk, we are going to focus on the following 12 highlights and landmarks:

In the track notes below, we’re describing the North Head Walk in a clockwise manner, following these highlights, starting at Shelly Beach.

Here is a map for your reference, with the highlights marked from 1 to 12:

While the North Head Walk isn’t very tough at all, there are many intersections where you might head in the wrong direction.

You certainly won’t get lost on North Head, but it would be a pity to miss out on one or more exciting sights and landmarks.

The North Head Walk actually forms part of the 80 km long Bondi to Manly walking track, and you will notice that there is quite a lot of signage for that iconic walk.

The best tip to stay on the right path is to follow the Bondi to Manly signs. These are marked with a yellow fish symbol and are very easy to recognise.

From the Manly ferry wharf, make your way to Manly’s main beach via The Corso on the other side of the peninsula.

Once you’re at the beach, follow the Marine Parade along the shoreline to beautiful Shelly Beach.

The Marine Parade walking path is a tourist attraction in its own right, with stunning views of the ocean and Shelly Beach at the end of the walk.

The track continues behind the beach to the Shelly Headland Lookouts via the steps leading to the car park.

There are several lookout points on this headland from where you can enjoy sweeping ocean views.

The track continues southbound, but if you have the time, you can make a detour and turn left to explore the headland a bit more via a short walking trail.

Otherwise, keep following the path southbound towards North Head. This path now slowly evolves into a bushwalk with a few steep parts.

The track soon hits a large sandstone wall, which was built in the 1880s to separate the land owned by the church from the quarantined land.

Make your way through the little door inside this wall to continue on the main track. This part of the walk is called the Bluefish Track, which ends at Bluefish Drive on North Head.

The Bluefish Track is an interesting trail through scenic bushland and swamp areas, with a few old military gun pits and observation posts to explore.

Bluefish Drive, at the end of the Bluefish Track, forms the eastern boundary of the North Head Sanctuary.

This is where the main walking track crosses the road and continues towards the historic Barracks Precinct.

The Barracks Precinct is a collection of art deco buildings, a parade ground, service areas and sheds, and a large bushland area.

The main Barracks were the largest in Australia and played an important role in upgrading the nation’s coastal defence throughout the 1930s.

After World War II, the Barracks was used by the newly established Army School of Artillery. The school remained there until 1998 before the Harbour Trust took over management of the area in 2001.

The main walking track crosses the parade ground, and you will see a large signpost on the other side. This is where you turn left and follow the signs to the Hanging Swamp.

The Hanging Swamp is a large swampland area with a long boardwalk constructed through and above it.

This is quite a fascinating section of the walk, with excellent views of the natural surroundings.

The main track continues to an area where two heavy 9.2-inch calibre guns were positioned during the Second World War to protect Sydney against enemy ships.

The road where these weapons were located is painted in camouflage colours to help conceal the location from potential aerial observation.

The weapons were only engaged once, in 1943, when an unidentified Polish ship approached the Harbour without official clearance. After warning shots, the ship turned away and moved on to Newcastle.

One barrel is displayed alongside the road, which gives visitors an idea of how big these weapons were at the time.

From the Gun Emplacements, the walk evolves into Australia’s Memorial Walk.

The Memorial Walk is a paved pathway with five monuments to remember the major military conflict periods in Australia’s history. It honours those who have served and supported Australia’s defence in peace or war.

The monuments have been designed to provide visitors with information on the military conflicts and serve as a place to rest, reflect, and remember.

The Fairfax Walk is a family-friendly 1 km long circuit trail with several lookout points that offer incredible views of Sydney Harbour, the city skyline, South Head and the ocean.

The highlight along this walk is the Fairfax Lookout, which is widely considered one of the most scenic lookout points in Sydney. It’s also the perfect whale watching spot, with clear ocean views.

Once you’re finished admiring the views at the Fairfax Lookout, retrace your steps to the intersection at the Memorial Walk, where you started this short detour.

This will allow you to continue the rest of the Memorial Walk from there, and visit the Defence of Sydney Monument.

This is a sandstone lookout over Sydney Harbour, dedicated to the memory of all who served in the defence of Sydney during the Second World War.

The next stop is the Visitor Centre and the cafe in the North Fort section of the North Head Sanctuary.

The North Head Sanctuary Visitor Centre is open 10 am to 3 pm Monday to Friday, and 10 am to 4 pm on weekends.

The Bella Vista Café is located inside the heritage-listed North Fort building, with majestic views of Sydney Harbour as a welcome bonus.

To continue on the main track, look for the path to a small sandstone wall, as per the above picture.

From there, the track continues northbound, heading towards the Third Quarantine Cemetery.

The Third Quarantine Cemetery was established in 1881, initially for victims of a smallpox outbreak. It was later used to cater for victims of the bubonic plague in 1900 and the influenza epidemic of 1919.

The National Heritage listed cemetery was closed in 1925 and now contains the remains of more than 200, mostly young, people.

Visitors are welcome to access the cemetery and wander around.

From the cemetery, the walking track continues back towards the Barracks Precinct via a well-maintained path through scenic bushland.

Note that there are a few intersections where things may get a bit confusing, but if you keep following the Bondi to Manly walk signs, you’re on the right track.

The track soon arrives at North Head Scenic Drive. Follow this road for a little while, then turn left into Collins Beach Road at the signpost.

Follow that road until you get to one of Sydney’s prettiest secluded beaches, Collins Beach, otherwise known as Collins Flat Beach.

Walk across the sand to continue the walking track heading into the bush on the other side of the beach.

The track is now leaving North Head behind and is heading back into Manly, but not before taking in a few more scenic highlights.

From Collins Beach, the track continues past “Jump Rock” to Little Manly Point, where you can enjoy scenic views of the bay and the Harbour.

It has excellent facilities, including a shark-proof swimming enclosure and a cafe right at the beach.

From Little Manly Beach, the walking track returns to Manly via Stuart Street, followed by the esplanade along East Manly Cove.

And that concludes the Manly North Head circuit walk. Now it’s time to pick a good cafe, pub or restaurant for a well-deserved lunch and perhaps even a nice cold beer. Check out our guide on the best activities in Manly for inspiration for more things to do.