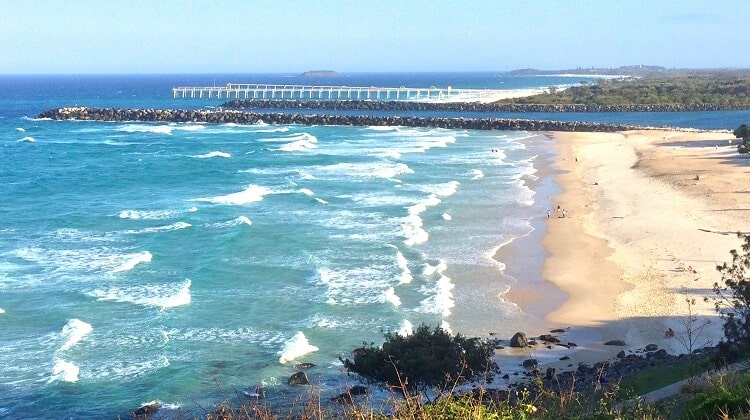 Situated at the border between Queensland and New South Wales, Point Danger is home to the Captain Cook Memorial, a large lighthouse, in addition to a short coastal walking track that commemorates ships and lives lost during WWII.

Spend a half day in Point Danger and learn more about Australia’s history, while enjoying some of the best ocean views on the east coast.

If you’re driving up from the south, follow the Pacific Highway (M1) and take the Minjungbal Drive exit to Tweed Heads.

Turn right into Boundary Street and park your car at the small car park on Tweed Terrace (see map location).

Otherwise, if you’re driving in from the Gold Coast, take exit 95 from the M1 towards Currumbin and Tugun. Continue on to the Gold Coast Highway, followed by Tweed Street and Boundary Street.

The parking area at the lookout in Point Danger is rather small and can fill up quickly on the weekends. If it is indeed at capacity, you can try parking at nearby Rainbow Bay or Snapper Rocks, or on the nearby suburban streets.

Point Danger is a headland that marks the border between New South Wales and Queensland. It is situated at Tweed Heads and Coolangatta on the southern end of the Gold Coast.

Captain Cook named the area Point Danger when he first sighted it in 1770 when his ship Endeavour nearly hit reefs. Nearby Wollumbin, now a National Park, was appropriately named Mount Warning at the same time.

With amazing views of the coast, and several walking tracks and beaches close by, Point Danger has become a popular tourist destination.

On a clear day, the views can stretch as far as Surfers Paradise in the north and Byron Bay in the south. And with a bit of luck, you may even be able to spot some whales and dolphins out in the ocean.

Centrally located on the border line stands a huge eye-catching concrete tower that is in fact a working lighthouse. The four columns of the structure are orientated on the cardinal points of a compass.

Erected in 1970 in Brutalist architecture style at 148 feet above sea level, Point Danger Light was initially designed as a world-first laser lighthouse.

That experiment failed and the light source was replaced by a traditional electronic beacon, emitting a double white flash every ten seconds.

Next to the lighthouse is the Captain Cook Memorial, a small structure made from cast iron that was recovered from the original Endeavour in the 1960’s.

The lighthouse and memorial were established to commemorate the 200th anniversary of the discovery of Australia’s east coast by Captain Cook.

The Centaur Remembrance Walk along the coast at Point Danger commemorates ships and lives lost to Japanese and German aggression during World War II.

It was named after the AHS Centaur, a hospital ship that was attacked by a Japanese submarine on 14 May 1943. Memorial plaques are positioned along the walk to honour those that lost their lives at sea.

The scenic location of the walk, combined with the information boards along the way, make this a pleasant and also educational experience.

The Centaur Remembrance Walk can easily be extended around Froggy Beach towards Snapper Rocks, Rainbow Bay and Coolangatta Beach.

This walking track is part of the popular Gold Coast Oceanway, a 36km long shared pedestrian and cyclist pathway.

It is in fact a connected series of tracks between Point Danger and the Gold Coast Seaway, otherwise known as the Spit.

If you’re on holiday in or close to this area, check out our list of top things to do in Byron Bay and surrounds for some great ideas for sights and activities.