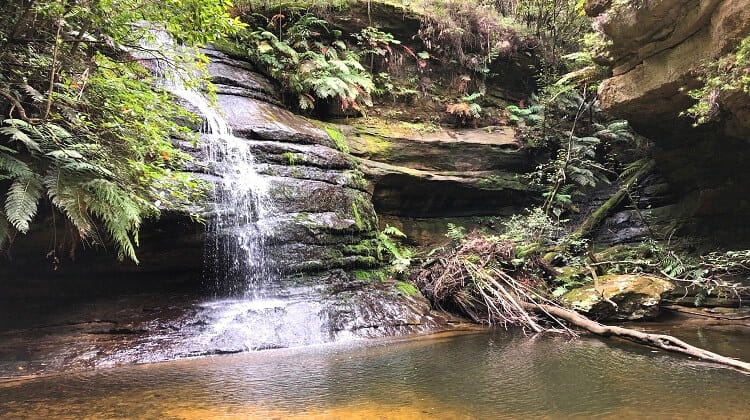 This quiet and unpretentious walking trail is located in the Leura area of the Blue Mountains, close to the Gordon Falls lookout and picnic area.

It’s a great way to enjoy some unspoiled natural scenery in the Blue Mountains, with various lookouts nearby to explore.

The walk starts at the Gordon Falls Reserve on Lone Pine Avenue in Leura. To get there, turn into Leura Mall from the Great Western Highway, and turn left into Olympian Parade.

The parking area at Gordon Falls Reserve and picnic area is located at the end of that road (see map location).

This is not the only way to get to the Pool of Siloam waterfall though. An alternative access point is from Gladstone Road (or The Links Road), located on the other side of the valley (see map location).

The benefit of going to Pool of Siloam via this access point is that it passes the Golf Link Lookout, which is a pretty interesting lookout point facing the Jamison Valley.

The map below gives you an idea of where this track is located, with the Pool of Siloam (1) and Lyrebird Dell (2) marked as the highlights.

It’s a circuit trail, so you can go clockwise or anti-clockwise, which doesn’t really matter all that much. However, if you’re only interested in visiting the Pool of Siloam, it’s best to go anti-clockwise, starting from the picnic area.

The start of the circuit walk can be found towards the eastern end of the picnic area.

Keep an eye out for the Pool of Siloam Track signpost, from where the track heads straight into the bush.

The track starts nice and easy, but soon turns into a rather steep descent into the valley. This section of the trail is well maintained, though, and there is no rock scrambling involved.

At some point, the track arrives at an intersection. This is where you need to keep going straight on the main path to get to the pool.

As the track gets closer to the pool, the beautiful sound of streaming water also becomes louder.

The Pool of Siloam is a natural waterhole and waterfall on Gordon Creek, a creek that eventually drops into Jamison Valley via Gordon Falls a bit further away.

The small waterfall is at its best after a period of rainfall when more water is running through the creek, which also makes the water in the pool cleaner.

The views of the waterfall are most enjoyable from the sandstone steps in front of the pool, which forms part of the actual walking track.

From the waterfall, you can continue the trail past the sandstone steps, slowly climbing up to the Golf Link Lookout.

It’s a rather steep climb, but the views from that lookout are pretty good.

Otherwise, leave that lookout for a different day, and focus on the next highlight along the circuit walk; Lyrebird Dell.

From the Pool of Siloam, retrace your steps to the intersection, and make a right turn to follow the path towards Lyrebird Dell.

A small signpost will help you identify this intersection.

Lyrebird Dell refers to a valley-like area with a large sandstone cave and a small waterfall with a pool. The cave is of Aboriginal significance, and is now home to a couple of picnic tables.

This waterfall is smaller than the Pool of Siloam waterfall, but it is still a pretty sight. If there is enough water in the pool, feel free to go in and get your feet wet.

From the waterfall, keep following the track, which from that point onward slowly climbs out of the valley until it meets the road.

There are various lookout points nearby that are very much worth a visit.

Three of these lookouts are very close to one another and are all accessible from Olympian Parade.

The Gordon Falls Lookout is the most obvious one to visit, as it is signposted from the car park.

To get there, follow the short walking trail from the information board, descending into the bush. There are some steps involved to get to the lookout, but it’s not too hard.

The views from the Gordon Falls Lookout of the Jamison Valley are amazing, with various landmarks to be seen, such as the Three Sisters, Mount Solitary, Ruined Castle, and the Narrow Neck Plateau.

The actual waterfall, Gordon Falls, is also visible, although there is hardly any water dropping into the valley during extended periods of dry weather.

Both of these lookouts are on the Prince Henry Cliff Walk and, as mentioned, are also accessible from Olympian Parade.