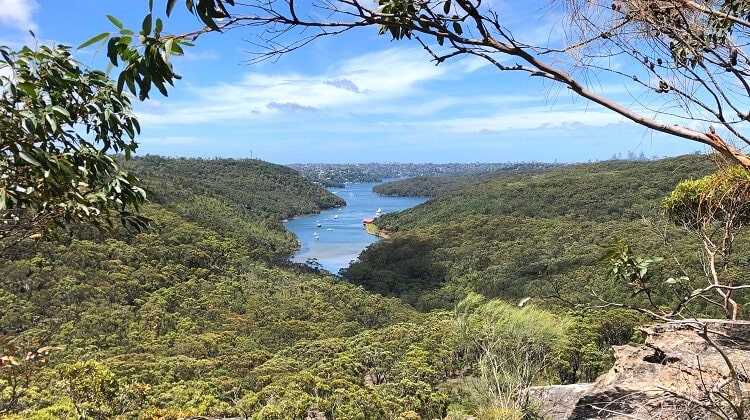 The 5.5 km return walk from Seaforth Oval to Bluff Lookout is a challenging bush trail in Garigal National Park with fantastic views of Bantry Bay.

It’s an exciting hike with a few climbs and sections with rough surface to conquer, but the views from the lookout make it a worthwhile adventure.

For more exciting walking tracks like this one, have a look at our list of best bushwalks in Sydney for some great options.

The walking track to the Bluff Lookout starts from the Seaforth Oval which has a reasonably sized car park available (see map location).

The oval is located at the southern end of Wakehurst Parkway in Seaforth. If you’re driving in via Spit Rd, turn left into Sydney Rd after crossing the Spit Bridge, and follow Frenchs Forest Rd until you reach the Wakehurst Pkwy.

There is also a bus stop on Wakehurst parkway next to the oval, which makes public transport a good option. Check the NSW trip planner website for current bus timetables.

Note that if you only want to visit the Bluff Lookout and aren’t too interested in the actual walk, you can also get there very easily from Ararat Reserve in Frenchs Forest (see map location). Park your car on Bantry Bay Road and follow the very short Bluff Trail to the lookout.

We rate the walking track from Seaforth Oval to Bluff Lookout as moderate to hard. Even though it’s reasonably short, it does have steep sections and the surface at times can be a bit rough and muddy.

It’s important to wear decent hiking shoes and also to bring a sufficient amount of water.

Here is a map of the walk:

The start of the walking track can be found at the information boards at the northern end of the Seaforth Oval car park.

From there, the trail heads straight into the bush and soon arrives at the Timber Getters Track and Engraving Track intersection.

This is where you need to turn left to continue the main walking trail via the Timber Getters Track through pleasant bushland scenery.

This section of the walk is quite easy as it goes downhill for the most part, heading towards Bantry Bay.

The Timber Getters Track arrives at the Bantry Bay Picnic Area which is home to a picnic table, an open grassy area, lots of trees, and a public wharf.

It’s worth walking onto the wharf because the views of Bantry Bay from there are very pretty.

The buildings on the opposite side of the bay were once part of the Bantry Bay Explosives Depot, and were used to store military explosives up until 1974.

From the picnic area, continue the main walking trail via the Bay Track which follows the eastern shoreline of the bay.

This is the most enjoyable part of the walk as you get to take in beautiful views of the bay from different angles.

Towards the northern end of the bay, the track gets a lot more challenging with steep sections, a bit of rock scrambling, and a couple of creek crossings.

The last section to the Bluff Lookout is the steepest part and actually feels much longer than it really is.

But as you make your way up to the official lookout, don’t forget to also enjoy the views of the bay that keep getting better the higher up you are.

The Bluff Lookout is an unfenced rocky area that offers fantastic views towards Middle Harbour and the city skyline. On a clear day, you may even be able to identify some of Sydney’s iconic skyscrapers.

There is lots of space at the lookout to sit and take in the views or to even have a picnic.

Back to Seaforth Oval

Once you’ve finished exploring the Bluff Lookout, you have three options to get back to the Seaforth Oval.

1. Return the same way:
The most obvious thing to do is to simply retrace your steps via the same walking track.

To get there, follow the Bluff Trail to Ararat Reserve, and make your way to the start of the Engravings Track via Bantry Bay Rd.

The start of this track is just beyond the Bluff Lookout and is very clearly signposted.