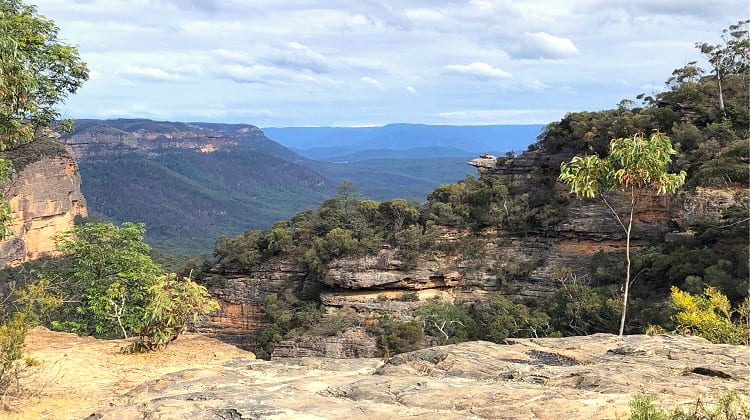 The historic Six Foot Track is a challenging but exciting multi-day hike, starting at the former Explorers Tree in Katoomba all the way to the Jenolan Caves, crossing the Megalong Valley and the Coxs River in the Blue Mountains.

This once-in-a-lifetime experience is a true adventure for bushwalkers, taking in a variety of landscapes and habitats, and with several overnight camping options to choose from.

The Six Foot Track is a one-way hike, which means you can start at both ends. Most bushwalkers however start in Katoomba, at the former historic Explorers Tree on Nellies Glen Road (see map location).

The site of the former Explorers Tree is located a couple of kilometres west of Katoomba Station, and has a small parking area available.

The other end of the Six Foot Track is at Jenolan Caves House, a beautiful heritage-listed building with dining and accommodation options available to visitors of the Jenolan Caves (see map location).

Because of the distance of the track, it’s best to get yourself dropped off at one end, and be picked up at the other end.

The map below gives you a rough idea of where the track starts and ends.

To find the more detailed route with the option to zoom in and out, have a look at the route on Google Maps.

Overall, the track itself isn’t too hard, with only a few steep sections. But it’s the distance that makes the Six Foot Track such a challenging and memorable adventure.

About the Six Foot Track

The historic 45-kilometre long Six Foot Track was first built in the late 1880s as a bridle trail to the Jenolan Caves. The track was six feet wide to allow for two laden horses to pass through.

It was known simply as the Bridle Track up until 1937. Now managed by Crown Land, the Six Foot Track meanders through state forests and through the Blue Mountains National Park.

These are some of the highlights and landmarks of the Six Foot Track from Katoomba to Jenolan Caves:

The average hiker will need two nights and three days to complete the Six Foot Track, but the professional hiker or trail runner can certainly complete the track in one full day.

As mentioned, the Six Foot Track starts at the former Explorers Tree in Katoomba. When you see this tree – or rather, what’s left of it – for the first time, it is probably going to be a somewhat underwhelming experience.

The tree isn’t alive anymore, and sits on a sandstone platform with a fence around it. Definitely not a good look, and the fact that a car crashed into this structure a several years ago hasn’t helped either.

In 2021, the tree and the platform were removed entirely due to risk of the structure collapsing onto the highway.

The story goes that the three explorers Blaxland, Wentworth and Lawson carved their initials into this tree during their 1813 crossing of the Blue Mountains. These carvings aren’t actually visible today, and there has always been widespread doubt about the authenticity of this story.

But regardless, it’s an interesting place to visit and to learn more about the explorers and also about the Durag and Gundungurra people, the traditional custodians of the lands where the tree is located.

The actual starting point of the Six Foot Track is not too far away from the Explorers Tree, a few hundred metres further into Nellies Glen Road. Take a left turn at the big sign, and your hiking adventure will officially commence.

Perhaps one of the most significant landmarks and milestones along the Six Foot Track is the Coxs River Suspension Bridge, otherwise known as the Bowtells Swing Bridge.

Crossing this bridge over the Coxs River is an adventure in itself, because of its height and its “instability”. The bridge was built as an alternative crossing for hikers during periods of heavy flow in the river.

The best and safest way to cross the bridge is by placing both hands on the cables, and by moving forward in a slow pace. If you are unsure or afraid of heights, you can also cross the river by walking over the rocks, provided the river isn’t flooded.

If hiking from Katoomba to Jenolan Caves isn’t hard enough already, you can actually also run the trail as a real marathon. The first Six Foot Track Marathon was held in 1984, and has been organised on an annual basis each year since, with now almost 1,000 runners participating.

It’s a not-for-profit event, with all proceeds going to the Blue Mountains Rural Fire Service who provide assistance to participants on race day.

Since the race is considered much harder than a conventional marathon, there are some strict qualification criteria in place for safety reasons.

You can read more about these qualification criteria, the actual race course, registration details, and much more, on the official Six Foot Track Marathon website.

There are several well-maintained camping grounds to choose from along the Six Foot Track. From east to west, these are:

When using water from the tanks at any of the campsites, make sure you boil or treat the water before drinking.

If you prefer a bit more comfort, the Six Foot Track Eco Lodge is also a great option. Located close to the Coxs River Campground, the lodge provides accommodation for up to 28 guests in two cabins with comfortable wooden bunk beds.

The lodge has a fully equipped outdoor kitchen, but if cooking your own food is not your thing, you can also order your meals in advance. Bookings are definitely recommended.