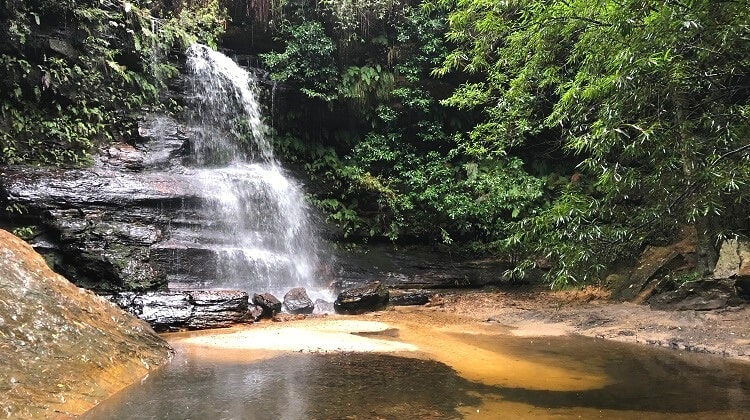 The South Lawson Circuit Walk is an unspoiled bushwalk that takes in four small but pretty waterfalls in the southern part of Lawson, a quiet town located 14 km east of Katoomba in the Blue Mountains.

It’s also one of the very few dog-friendly walks in the Blue Mountains where your furry friend is more than welcome to join you on this exciting hike.

The main starting point of the circuit walk is located on Honour Avenue, less than 1km south of the train station (see map location).

The walking track runs past the former Lawson golf course, which now happens to be a large 24-hour dog park.

There are actually two starting points for the South Lawson Waterfall Circuit Walk, both on Honour Avenue and both with car parks, as indicated in the map below.

The most logical spot to park your car is at the little car park at the corner of Livingstone St and Honour Ave. If that car park is full, simply park somewhere on the side of the road, or try the second car park further south.

The train station is within walking distance from the walk as well, so public transport is a great alternative to travelling by car.

The circuit walk takes in four waterfalls (see their locations in the map):

The best time to do this walk is after a period of rainfall when the waterfalls are the most impressive. Be mindful though that the track can get a bit muddy, so be sure to wear proper hiking shoes.

The start of the circuit walk is well sign-posted at the corner of Honour Ave and Livingstone St. If you’re travelling by train, the station is located less than 1km from the starting point.

The little map that you can find at the starting point is very useful as it gives you a good sense of where the waterfalls are located.

Although it’s a circuit walk, there are a few intersections along the way where things can get a bit confusing, so it’s a good idea to have a closer look at the map before you start the walk.

The first intersection pops up around five minutes into the walk. To get to the dog park, turn right at this intersection, otherwise keep going straight.

The first waterfall, Adelina Falls, is not too far away from this intersection.

After Adelina Falls, there are 3 more waterfalls to be discovered along this pleasant bushwalk: Junction Falls, Federal Falls and Cataract Falls.

They are not huge or overwhelming by any means, but they are very pretty and somewhat unpretentious waterfalls.

All of these waterfalls can be accessed via little sidetracks off the main track. The signage is pretty good, but it’s still possible to miss them.

Federal Falls in particular is easy to miss, because the sidetrack to that waterfall is a bit longer than the other ones.

Cataract Falls is very close to Honour Ave, and once you’ve made it back to the streets, there are two ways to return to the starting point.

You can either return by walking on the side of Honour Ave, or you can choose to follow the fire trail that runs parallel to the street.

This second option is perhaps a bit more exciting.

Despite the fact that the South Lawson Waterfall Circuit Walk has been around for more than a century, it is still very much unspoiled. It’s not a walk for the tourists, so it usually doesn’t get too busy.

Although not overly challenging, this circuit walk is a very pleasant and refreshing bushwalk with a somewhat authentic atmosphere.

If you’re keen to discover more hikes in the area, be sure to check out our list of the best walking tracks in the Blue Mountains region for some great ideas.

Also read:
Most scenic waterfalls in the Blue Mountains.

The Town of Lawson

The town was named after William Lawson, an English born explorer and politician who was the first white settler to cross the Blue Mountains together with Gregory Blaxland and William Charles Wentworth in 1813.

The original name of the town was actually “Blue Mountain”, which caused too much confusion for locals as well as visitors, and a name change was inevitable.

Besides the waterfall circuit walk in the south, there are some other interesting walking tracks to be found in the northern part of Lawson.

The most popular track north of the Great Western Highway is the Empire Pass, a 5km bushwalk with several small waterfalls to see on the way.