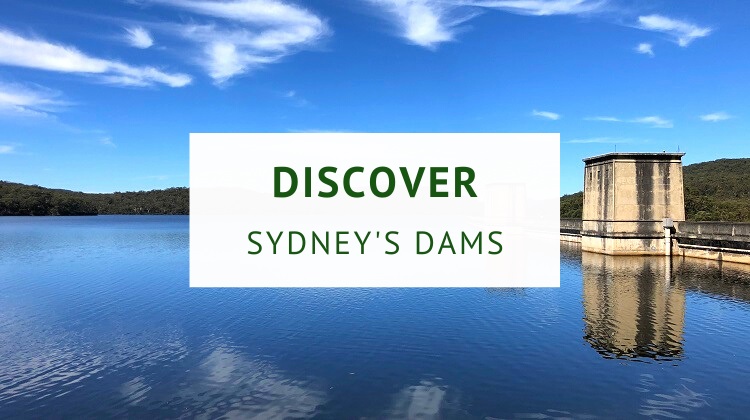 There are currently more than 100 major dams in New South Wales, and more than 20 storage dams in the Greater Sydney region.

Dams exist to store water that can be used for irrigation and as a source of drinking water for urban areas. Most of Sydney’s drinking water is sourced from catchment areas created by these dams.

In this article we are sharing a list of 12 dams in Greater Sydney that you can visit. Some of these dams are heritage listed, and often have picnic areas and viewing points nearby, which makes for a great day out.

With each dam below, we have included a link to their location on Google Maps to help you plan your day.

Manly Dam in Manly Vale is one of the oldest dams in Sydney, built at the end of the 19th century followed by several upgrades in later years. Its purpose was to supply water to the Manly and surrounding areas.

During the first half of the 20th century, Manly Dam slowly reached its limits of capacity, and the dam pumps were eventually dismantled in the 1930’s.

Manly Dam is now a heritage listed, decommissioned dam, and forms part of the Manly Dam Reserve, a large recreational area with various activities to do around the lake, such as hiking, mountain biking, swimming, water skiing and picnicking.

Walking on top of the heritage listed Woronora Dam in the Sutherland Shire is quite the experience, with various sections where you can enjoy impressive views of the lake on one side and of the gorge on the other side.

Opened in 1941, the Woronora Dam is an important piece of engineering, supplying water to the Sutherland Shire and to the northern suburbs of Wollongong and the Illawara region.

Visiting Woronora Dam makes for a great day out, with two large picnic grounds with electric barbeques and a playground to enjoy.

Construction of the heritage listed Cataract Dam was completed in 1907, and is one of the four dams that are part of the Upper Nepean Scheme. The other three dams in that scheme are the Cordeaux, Avon and Nepean dams.

Cataract Dam is a very pretty sight, with a classic castle-style structure built on top of the dam wall and excellent viewing points along the wall to enjoy.

Cordeaux Dam is the second dam that was built as part of the Upper Nepean Scheme. Construction of this dam was completed in 1926, and now functions as a source of water for the Wollondilly Shire, the Macarthur and Illawarra regions, and metropolitan Sydney.

The Egyptian inspired design of the dam makes it quite a remarkable sight. And with a large picnic ground with electric barbeques nearby, a visit to Cordeaux Dam is guaranteed to be a great day out.

When walking on top of the dam wall, make sure to walk all the way to the end to have a look at the large spillway. When the water level is high, this spillway looks like a waterfall.

The heritage listed Warragamba Dam in the outer South Western Sydney suburb of Warragamba in Wollondilly Shire is responsible for the creation of the enormous Lake Burragorang. This lake is the primary water supply reservoir for Sydney.

Warragamba Dam has a great visitor centre where you can learn everything about the dam, how it works, how it was built, and so much more. There are also various lookout points nearby, with fantastic views of the dam.

When visiting the Warragamba Dam, a drive to the Lake Burragorang Lookout is definitely recommended. This lookout is an easy 40 km drive south-west of the dam, and offers superb views of the lake and surrounding mountains.

Avon Dam was constructed around the same time as nearby Cordeaux Dam, and has a similar Egypt inspired design, with large pylons complete with decorative lotus columns at both ends of the dam wall.

A large picnic area with barbeques, tables, shelters is located near the entrance of the Avon Dam recreation area. From there, you can either walk or drive to the dam.

Located close to Avon Dam, the Nepean Dam is the smallest of the four dams in the Upper Nepean Scheme, but it certainly is a pretty one.

It has a unique art deco style of construction, which makes it stand out from the other three dams in the same scheme.

The Nepean Dam recreation area is home to a couple of well equipped picnic grounds, parking areas, toilet blocks, and a walking track to explore the dam and surroundings.

Located approximately 20 km south-east of Bowral, the Fitzroy Falls Dam is responsible for the creation of the Fitzroy Falls Reservoir. It is part of the Shoalhaven Scheme, and is now also a popular land-based fishing spot.

Please note that Fitzroy Falls Dam itself isn’t very spectacular, and isn’t really a destination in itself. Rather, it’s a nice place to visit in combination with a visit to the Fitzroy Falls waterfall on the other side of the road.

When visiting, it may also be worthwhile to go and have a look at Wingecarribee Dam, which isn’t too far away from Fitzroy Falls. It’s quite similar to Fitzroy Falls Reservoir, and has a nice lookout point and a small picnic area.

Located approximately 40 km south-west of Fitzroy Falls, Tallowa Dam is also part of the Shoalhaven Scheme and provides water to the Shoalhaven and Southern Highlands regions.

One remarkable feature of the Tallowa Dam is a mechanical fish lift that can collect and transport fish over the dam wall to the upstream area where they can spawn and feed.

A section of the dam wall is open to the public, and a vantage point along a walking path offers views of the dam and the surrounding scenery.

Completed in 1856, Lake Parramatta Dam is one of the oldest large dams in Australia. The 15 metres high arch shaped dam on Hunts Creek was built to provide the local area with water.

The dam was eventually decommissioned in 1909 when Parramatta was connected to the Sydney water system, and since then Lake Parramatta has been a popular recreational area.

Lake Parramatta Reserve is now home to various bushwalking tracks, including a circuit trail around the lake that offers great views of the dam.

Prospect Reservoir is located approximately 35 kilometres west of Sydney, and is a heritage listed water storage facility created by the Prospect Dam on Prospect Creek.

The reservoir was completed in 1888 to supply Sydney with water collected from the weirs on the Illawarra Plateau south of the city. The four dams in the Upper Nepean Scheme helped to increase the supply of water in Prospect Reservoir.

The best spot to visit is the large recreational area on the eastern side of the reservoir, with various parks, picnic spots, playgrounds, and lookouts to explore and enjoy.

Oberon Dam is an important embankment dam in the western part of the Blue Mountains, and is responsible for the creation of Lake Oberon.

Situated on the Fish River, Oberon Dam was built during and after WWII to help resolve chronic water supply problems in the area.

The dam is considered a medium sized water storage, with a wall height of 34 metres and length of 232 metres. The dam wall is open to the public, with picnic areas and vantage points nearby to enjoy. Lake Oberon is also a popular spot for trout fishing.

Note that Oberon Dam isn’t as pretty as most other dams in this list. If you’d like to visit Oberon Dam, it’s recommended to combine it with a trip to the Jenolan Caves, or as part of a weekend getaway in the Lithgow area.