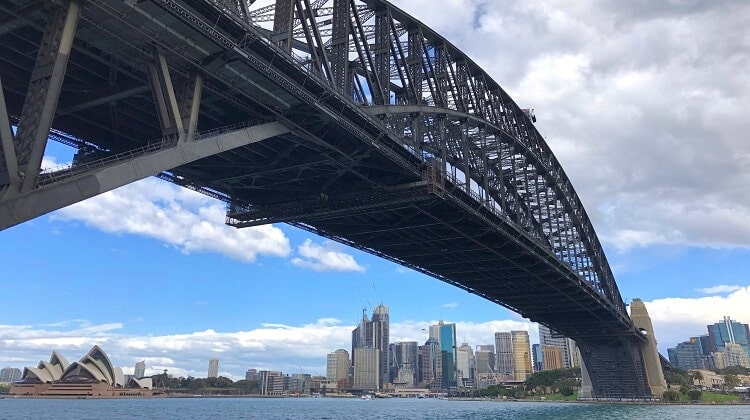 Walking across the Harbour Bridge via the pedestrian walkway is the easiest and best way to experience the beauty of this landmark, while also enjoying incredible city and Harbour views.

There are two access point to the Sydney Harbour Bridge pedestrian walkway:

The somewhat mysterious looking, art-deco building that holds the Bridge Stairs, is located at 100 Cumberland St in The Rocks, only a short walk from Circular Quay.

Simply make your way into that building, walk up the stairs, and follow the signs to the Sydney Harbour Bridge.

The staircase on the other side of the bridge, in Milsons Point, is located next to the pedestrian tunnel at the Broughton and Burton Street intersection.

The Sydney Harbour Bridge Walk is a one-way pedestrian walkway, so it doesn’t really matter at which side of the bridge you start.

One of the absolute best free things to do in Sydney is walking across the Sydney Harbour Bridge from The Rocks to Milsons Point.

The biggest drawback of doing the Sydney Harbour Bridge Walk is perhaps the noise from the cars that drive past right next to the walkway.

But this is also something you will quickly get used to and may not even notice anymore after a little while.

Bridge Stairs in The Rocks

Once you’ve found the Bridge Stairs in The Rocks, make your way up to find the pedestrian walkway on the Sydney Harbour Bridge.

You will notice an intersection with the Cahill Walk. At this intersection, follow the arrow to the Sydney Harbour Bridge to get to the pedestrian walkway.

The Cahill Walk is another interesting walk that leads to Circular Quay and the Botanic Garden. You can read more about that particular walk further below.

Views from the Bridge

Once you’re on the pedestrian walkway, the views will slowly get better as you get closer to the middle of the Harbour Bridge.

What’s great about the bridge walk is that the walkway is located on the eastern side of the bridge.

This means you get to enjoy the best views of the city, the Harbour, Circular Quay, the Opera House and Kirribilli from an elevated point.

In contrast, the cycle lane and the train line are both located on the other side, the western side, of the Harbour Bridge with less interesting views.

At the first pylon, you will find the entrance to the Pylon Lookout and museum, one of the best Sydney tourist attractions.

If you do have time to spare, it’s highly recommended to visit the Pylon Lookout, as not only are the views from higher up absolutely amazing, the museum that is housed in the pylon is also quite interesting.

You can read more about this attraction in our guide to the Harbour Bridge Pylon Lookout.

The Sydney Harbour Bridge Walk finishes at the Bridge Stairs in Milsons Point, close to the train station.

Milsons Point, and next door neighbour Kirribilli, are both great suburbs to have lunch, with lots of cafes and restaurants to choose from.

It’s recommended to go for a little wander in this area, as there are so many spots with beautiful views to soak in. The circuit trail in Milsons Point around Lavender Bay is perfect for this.

If you want to make the most of your day exploring the Sydney Harbour Bridge, there are two great walks that connect with the Harbour Bridge walk:

Let’s dive a little deeper into these two interesting walks.

The scenic Milsons Point and Lavender Bay circuit trail is an easy walk just north of the Harbour Bridge.

To start this walking trail from the Bridge Stairs, head south towards the Harbour and cross Bradfield Park underneath the Sydney Harbour Bridge.

This park extends to the popular Broughton St Lookout, one of the most scenic lookout points in Sydney, with breathtaking views of Sydney Harbour and the city skyline straight ahead.

From the lookout, follow the walking path around the Milsons Point peninsula along the shoreline. The path continues under the bridge towards Luna Park and the North Sydney Olympic Pool.

You can continue either through Luna Park (free entrance), or otherwise via the boardwalk around Luna Park along the foreshore of Lavender Bay.

At the north end of the bay, the trail continues up the steep stairs to discover Wendy’s Secret Garden, a beautiful green space overlooking the bay.

From the garden, head back into Milsons Point via Lavender Street, from where you can either walk back to the city via the Harbour Bridge, catch a train, or catch a ferry from the Milsons Point ferry wharf to Circular Quay.

The Cahill Walk can be accessed via the Bridge Stairs in The Rocks, or on the other side of Circular Quay, via an access point in the Royal Botanic Garden.

This not-so-well-known walking path along the Cahill Expressway above the train station offers stunning views of Circular Quay, especially from the purpose-built viewing platform.

If you do have spare time, start the Cahill Walk from the Royal Botanic Garden and follow the walking path to the intersection with the Sydney Harbour Bridge Walk, and from there continue across the bridge to Milsons Point.

This way you can combine the Cahill Walk and the Harbour Bridge Walk into one hike, and experience the best views of all the major Sydney landmarks.

About the Sydney Harbour Bridge

Opened in 1932, the Sydney Harbour Bridge not only has the best looks, it is also an incredible piece of superb engineering.

Also known as the Coathanger because of its recognizable arch-based design, the 134m high Sydney Harbour Bridge connects the CBD with Sydney’s north shore.

History of the Bridge

In the 19th century, well before the bridge was built, a thriving ferry service carried travellers across the Sydney Harbour from the north shore to the city.

But with an increasing population and growing economy, the need for a bridge or tunnel became increasingly obvious.

After years of debating, royal-commissioning, designing, tendering and analysing, construction of a bridge across Sydney Harbour was legally authorised in 1922.

Construction work officially started in 1924, the two arches joined in 1930, and the bridge was completed and opened in 1932.

Design of the Bridge

Under the direction of Dr John Bradfield of the NSW Department of Public Works, the bridge was designed and built by British firm Dorman Long of Middlesbrough.

The Harbour Bridge was ultimately designed as a two hinged single span steel arch bridge. This type of bridge was chosen because a steel arch could accommodate heavy loads, while at the same time it would also look more impressive and imposing.

The winning design of the bridge needed to incorporate functionality and beauty. The four massive pylons, for example, weren’t actually required, but they were added to make the bridge appear more robust and attractive.

The pylons were also faced with granite to give them a more natural look, despite the fact that this involved considerably more expense.

Now, almost 100 years later, we should be thankful to Dr John Bradfield for designing a bridge that not only has had a dramatic impact on the city’s infrastructure, but that has also grown into an iconic tourist drawcard.