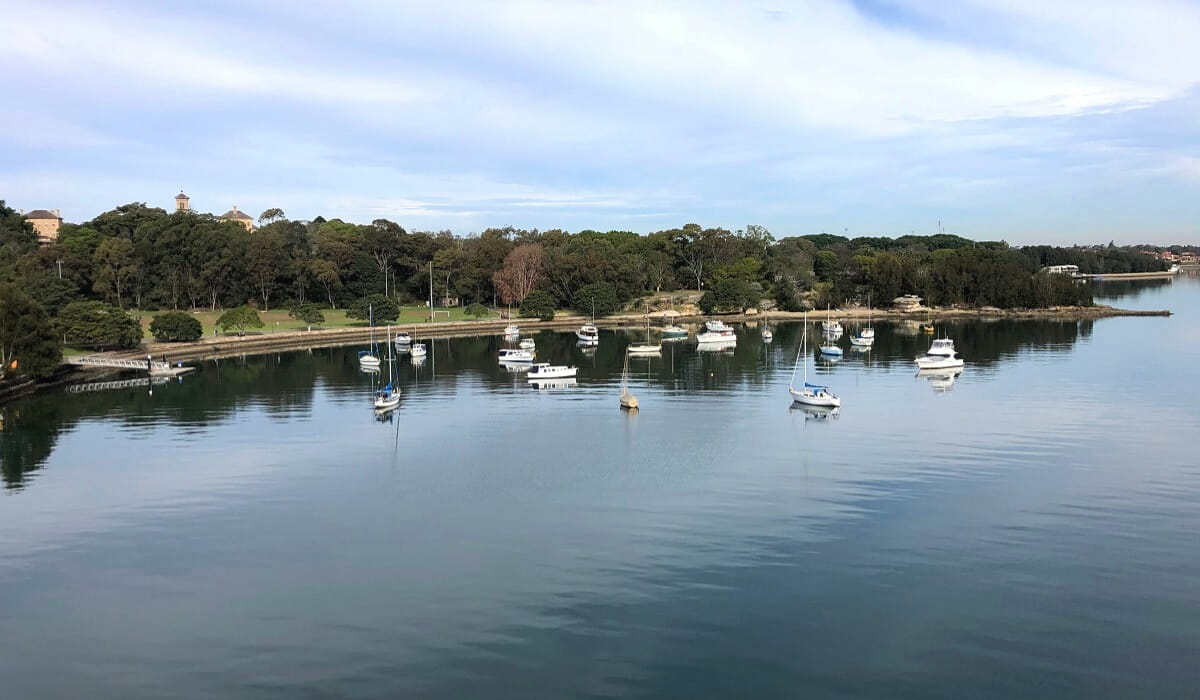 While it might not be Sydney’s most scenic walking track, the Bay Run is a hugely popular trail with cyclists, runners, joggers, walkers, and parents with prams.

Read on, and find out more about the highlights of the Bay Run, how to get there, and where best to park your car.

Since the Bay Run is a rather long circuit walk passing through several suburbs, you can start the walk basically anywhere that is most convenient for you.

There are lots of free street parking options along Henley Marine Drive on the northern side of the walking track.

There are also a few parking areas where you can park your car safely and for free:

Below is a map of the Bay Run with these parking areas marked. If you’d like to have a closer look at the map, check it out on Google Maps.

Public transport is of course also a logical option. The Bay Run passes through seven different suburbs with various bus stops along the way.

If you’re getting off the bus on Victoria Road, you can start the walking track from King George Park in Rozelle, just south of the Iron Cove Bridge.

The Bay Run is a relatively easy walking track that can be completed by anyone with a reasonable level of fitness. Apart from two small sections on both sides of King George Park, the walk is mostly flat.

The track is also mostly a shared pathway for both cyclists and walkers with clear signage from start to finish. And with various cafes and playgrounds to enjoy along the path, the Bay Run makes for a great few hours outside.

We will be describing the Bay Run in a clockwise manner along the following highlights, landmarks and milestones:

Note that it doesn’t matter if you do this walk clockwise or anti-clockwise.

Most people however seem to prefer to go anti-clockwise, which would mean that going clockwise is less busy.

Assuming you’ve parked your car at King George Park, or you got off the bus on Victoria Road south of the Iron Cove Bridge, head straight to the foreshore of King George Park to commence the walk.

Follow the walking path along the shoreline, past the small fitness station and the athletics field, and continue up the hill towards Callan Park and Callan Park Oval via Waterfront Drive.

Callan Park was once part of the former Callan Park Hospital in Lilyfield, and various heritage buildings are still present there. It’s worth wandering around in this area if you have extra time to spare.

From Callan Park, continue on the main track past the Leichhardt Rowing Club towards Leichhardt Park.

As mentioned above, there is a large carpark at this rowing club on Glover Street, so starting the Bay Run from there is a good option.

Leichhardt Park is a large recreational area, home to a fenced playground, a fitness station, a toilet block, and various benches and tables.

This is also where you will find Le Montage, a prominent Sydney waterfront venue with five event rooms. There is a cafe next door if you’re starting to feel a bit hungry at this point.

Crossing this bridge means that the Bay Run is leaving Lilyfield behind and is now entering into the suburb of Haberfield.

The walking track continues following the shoreline of Haberfield and passes the UTS Haberfield Rowers Club and Restaurant.

They also have a little popup style kiosk outside, which is a great spot for a quick coffee break overlooking the calm waters of Iron Cove.

The walking path continues along the, rather noisy, City West Link road towards the Iron Cove Creek pedestrian and cycle bridge, passing Robson Park and Timbrell Park on the other side of the road.

The walking path passes Rodd Park, a small peninsula that is home to the Dobroyd Aquatic Centre and the historic Rodd Point memorial.

Both Rodd Point and Rodd Park are named after the Rodd family, who contributed significantly to the local area throughout the 19th century.

The memorial was initially built as a mausoleum for the Rodd family, carved from a large rock by convicts. In the 1970’s, the structure was restored as a memorial by the Rotary Club of Five Dock.

From Rodd Park, the Bay Run continues along Henley Marine Drive from where you get to enjoy superb views of the water on one side and impressive real estate on the other side.

Note that this is a rather busy section with lots of runners and cyclists sharing the same path, so please be cautious and stay on the side of the appropriate lane as much as possible.

It’s worth reading the various information panels that explain more about the mangroves and mudflats that exist along this section of the Bay Run circuit walk.

The track continues along the northern foreshore of Iron Cove, past the Half Moon Bay Yacht Club and the Thompson Street Jetty, before it arrives at Brett Park and the Drummoyne Rowing Club.

This is where the Bay Run uses the shared pedestrian and cyclist lane on the Iron Cove Bridge to return back to Rozelle on the other side of the bay.

Iron Cove Bridge is a heritage listed steel truss bridge that carries Victoria Road between Drummoyne and Rozelle, and has been in use since 1955 when it was officially opened. A bridge duplication was opened in 2011 to cater for the ever increasing traffic.

The Iron Cove Bridge was built to replace a smaller bridge that was opened in 1882, which, at the time, offered a new way to travel from the west to Sydney via Balmain.

Once you’ve reached the other side of the Iron Cove Bridge, look for the winding path that leads back to King George Park. 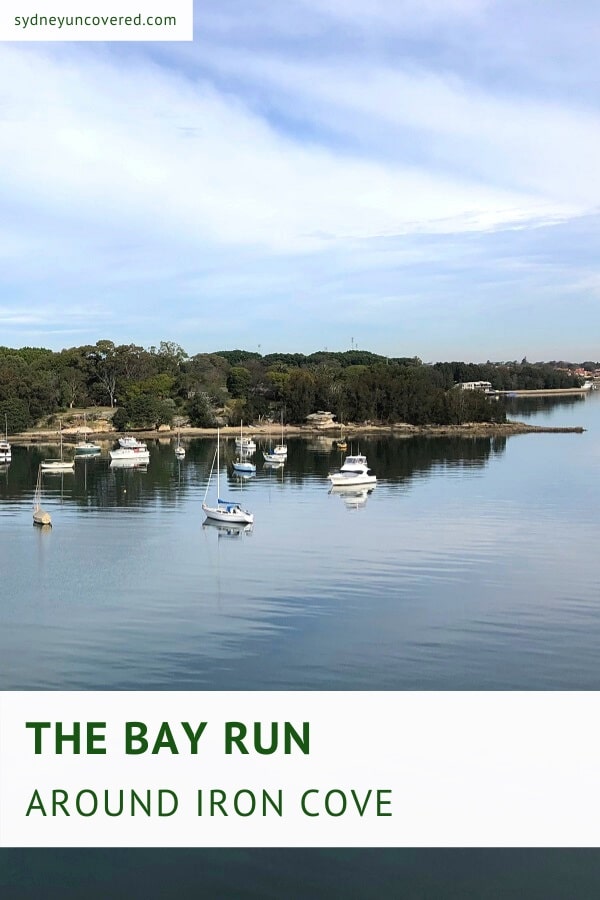