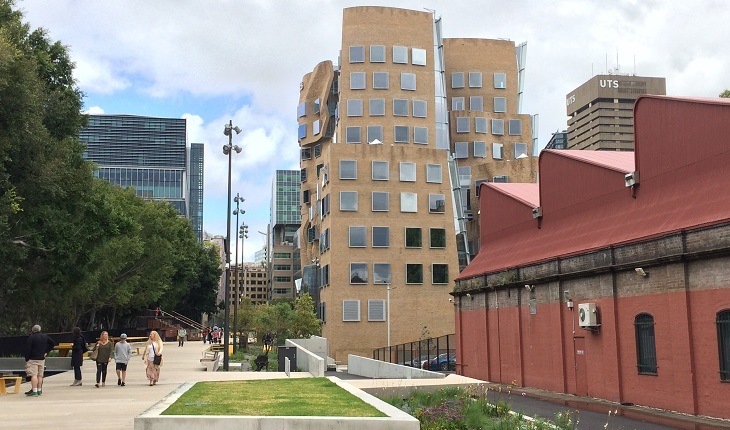 The Goods Line is a partly elevated urban walkway from Central Station in the Sydney CBD to Darling Harbour that follows the route of the once bustling but long neglected railway line.

After completion of a $15 million transformation, The Goods Line re-opened to the public on Sunday 30 August 2015 as a walkway, linear park and open space.

The walking trail starts right at the end of the Devonshire Street Tunnel at Central Station so it’s best to get there by train.

Exit Central station at South Concourse where the Devonshire Street Tunnel starts. Walk through the tunnel all the way to Railway Square where you need to continue into the second part of the tunnel. This will then soon flow into The Goods Line where you’ll see the old train track and also a yellow UTS sign.

The image on the left shows the South Concourse exit at Central Station from where you can go into the Devonshire Street Tunnel. The second image shows the signage at the first exit of the tunnel. This is where you need to keep going straight into the second part of the tunnel.

Alternatively, if you’re not arriving via Central Station, you can also walk to the Railway Square entrance to Central Station, go down the escalators, and you’ll end up at the end of the tunnel.

If you’re driving (not recommended), parking is available at several car parks in and around Darling Harbour and Chinatown.

History of The Goods Line

The Goods Line was once part of a busy freight rail system that started operation in the middle of the 19th century. This rail line ran from Dulwich Hill to Sydney Central, via big rail yards at Rozelle and Darling Harbour.

The rail line was mainly used to transport wool, meat and wheat into the area.

The last official train left Darling Harbour on the Goods Line in 1984. In the following years, the line was occasionally used by steam locomotives to transport goods between the Powerhouse Museum and Darling Harbour.

Some parts of the old line have also been re-used for the Sydney Light Railway.

The Goods Line was once a sober industrial area, but with the redevelopment, including various educational, cultural and media institutions, it is now a vibrant urban hub that offers a very pleasant atmosphere.

Parts of the old train track have been preserved, which you can clearly see as you walk along the Goods Line.

The Goods Line Project is very similar to the popular New York High Line, an urban renewal development that turned a section of an historic Manhattan freight line into a public park and walkway.

The Goods Line officially starts right at the end of the Devonshire Street pedestrian tunnel (follow signs for South Concourse and UTS) under Sydney Central Station and George Street, and runs all the way to the Powerhouse Museum site in Darling Harbour.

The Goods Line runs parallel to Harris Street, through the heart of Ultimo.

The Goods Line is a shared pedestrian and cycle path, and travels past important educational, cultural and media institutions, such as Sydney TAFE, the University of Technology Sydney (UTS), the ABC and the Powerhouse Museum.

One of the most eye catching buildings is UTS’s Dr Chau Chak Wing Building, designed by Canadian American architect Frank Gehry, which has a very unique architecture.

An estimated 320,000 custom designed bricks were used to construct this innovative building that looks like a squashed brown paper bag.

Halfway the walk, you will cross The Ultimo Road railway underbridge, the oldest iron bridge in Australia, built in 1879. It now has a big neon-lit “The Goods Line” sign attached to it that looks great at night.

The Ultimo Street signal box and interlocking machine were still in full operation up until the early 1980’s. It’s amazing to see how much has changed in such a relatively short amount of time.

At the end of the walk, you can continue your Sydney adventure in the Powerhouse museum, a fun and educational destination where you can explore the interactive side of science and technology.

You can also spend the rest of the day in much-loved Darling Harbour with its many cafe’s, restaurants, playgrounds and regular events being held.

The Goods Line is a very welcome, green addition to an already beautiful city that will be very popular with local office workers, students and tourists.

With a length of only 0.5 km, the Goods Line is a short stroll, but it’s the perfect way to cross the city from Central Station to vibrant Darling Harbour.

it is also a great place to enjoy a quiet and green little oasis, away from the busy city streets while still being close to everything.

At Central Station, follow the Devonshire Street pedestrian tunnel towards Railway Square, which will flow into The Goods Line. 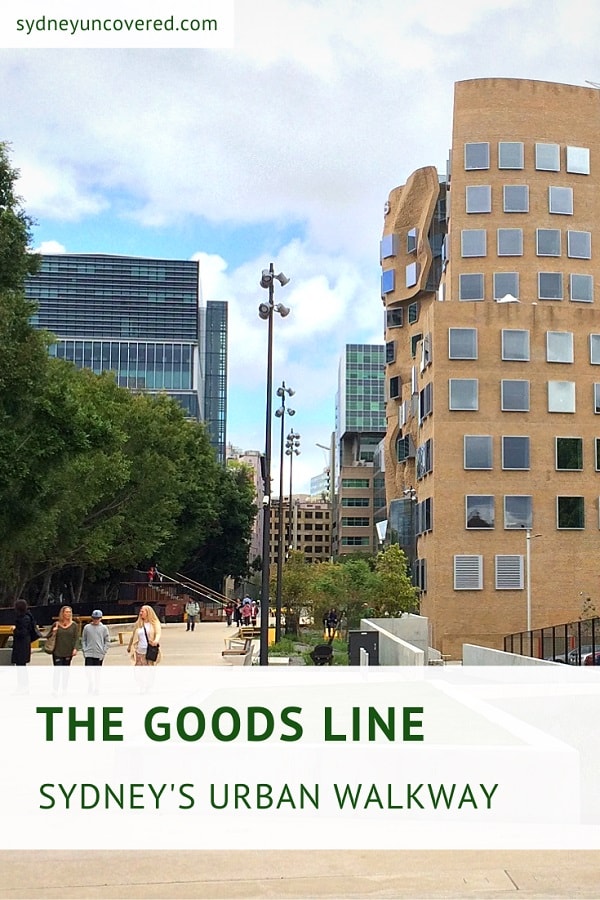