Home » National Parks » Blue Mountains » Things to Do in Lithgow 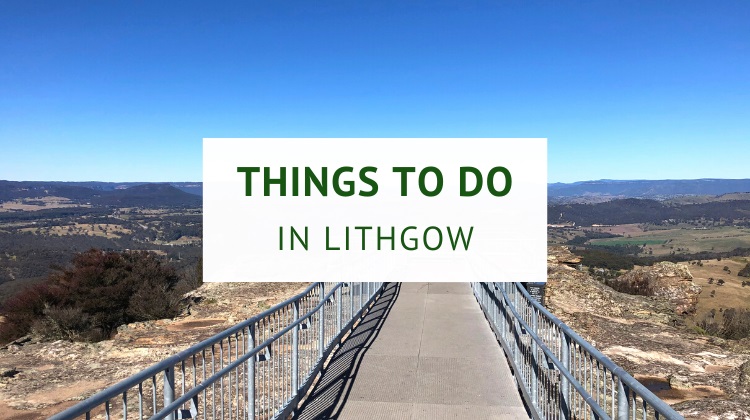 Lithgow is a historic town located on the western edge of the Blue Mountains, approximately two hours driving from Sydney via the Great Western Highway or the Bells Line of Road.

We have come up with a list of the top 18 things to do in Lithgow and the surrounding area, from historic sites and museums to exciting walking tracks and lookouts. All tried and tested by us!

You don’t have to do all of the below 18 attractions, but if you want to do them all, you will need at least three days and two nights.

These are two great motels in Lithgow:

Here we go, our top 18 things to do in Lithgow and its surrounds.

Visiting the historic village of Hartley is like taking a big step back in time.

Hartley is a town that has played an important role in the settlement of inland Australia. The 17 sandstone buildings in the historic site are a good visual representation of what this town was like in the 19th century.

The best way to learn more about the history behind Hartley is by simply wandering through the historic site. Various information boards explain more about the buildings, and a couple of walking tracks nearby allow you to explore this fascinating area further.

The Hartley Historic Site is situated on the Great Western Highway, less than 15 km south of the Lithgow town centre.

The popular Hassans Walls Lookout is the highest viewing point (1,136 metres above sea level) in the Blue Mountains. It offers panoramic views over the western edge of the Blue Mountains and the rolling valleys below.

Hassans Walls Lookout and Bracey Lookout (see below) are located within the Hassans Walls Reserve, established in 1917 to promote the development as a regional tourist attraction.

Hassans Walls Reserve was named that way because the cliff walls along the Western Road reminded Governor Macquarie (this is the year 1815) of the hill forts in India, where he saw service years earlier.

A long boardwalk, the Sir Joseph Cook Boardwalk, leads to a viewing platform from where visitors can enjoy sweeping district views.

While the Bracey Lookout certainly isn’t as impressive or as well-known as the Hassans Walls Lookout, it’s still worth a visit as it’s so close to its popular neighbour.

The Bracey Lookout was established in the 1950s to provide panoramic views of the Lithgow valley and the town centre. It was named in honour of the Bracey family, who played an important role in the development of Lithgow and the Hassans Walls Reserve.

Today though, the views are obstructed by the many trees, trees that didn’t seem to be there when the lookout was opened, according to old photos.

The Lithgow Blast Furnace was built in the first decade of the 20th century to produce pig iron for the steel needed for railway construction works.

In the 1920s, operations moved to Port Kembla, and the Lithgow Blast Furnace site was soon abandoned. It wasn’t until 1988 that the Lithgow City Council bought the site and transformed it into a tourist attraction.

The Lithgow State Mine Heritage Park is an award-winning mining and industry museum, situated on the former Lithgow State Coal Mine site, a short drive north of the Lithgow town centre.

The coal mine was a significant supplier of coal to the railways from the 1920s onward but was closed in 1964 due to flooding.

The museum showcases the industrial history of the Western Coalfields, with various displays, memorabilia and artefacts from the mines.

Read more about the Lithgow State Mine Heritage Park.

Initially opened to the public on 21 November 1966 as one of the earliest house museums in Australia, the Eskbank House Museum is now a regional museum of the Lithgow district.

The purpose of this low-key museum is to collect, preserve and interpret the histories associated with the early settlement and development of the Lithgow region.

Housed in a heritage-listed building dating back to the 1850s, the museum is owned and operated by Lithgow City Council and supported by a dedicated team of volunteers.

The Lithgow Small Arms Factory was established in 1912 by the Australian government to start manufacturing weapons in Australia instead of purchasing defence materials from the UK.

The factory became an important weapons supplier to the Australian army before and during both World Wars.

The factory is still in existence today, and the museum is a separate entity located on the factory grounds.

The museum is now home to a comprehensive collection of modern firearms from around the world and is a showcase of Australian manufacturing.

The gun emplacements in Bowenfels just south of Lithgow are a collection of heavy anti-aircraft guns that were constructed during World War II.

The purpose of the gun emplacements was to protect the mining, manufacturing and transport industries in Lithgow, as well as the Lithgow Small Arms Factory.

Visitors can freely wander around in the area and have a closer look at the gun emplacements, with information boards providing more details about the history behind the guns.

Dargan Arch, also referred to as Dargans Arch, is a natural sandstone rock formation that is shaped like an arch, located near the town of Bell, approximately 17 km east of Lithgow.

A short bushwalking trail leads to this beautiful spot, where visitors can walk across the top of the arch and venture down to the bottom for the best views.

Please note though that while this 1.5 km return walking track is relatively easy, the track is not signposted and there is no fencing at the arch, so care must be taken.

Read more about the Dargan Arch.

Situated just north of the rural town of Lidsdale in the Wolgan Valley, the Blackfellows Hand Cave was a meeting place for Aboriginal tribes of the local area.

The cave is like a large rock overhang where you will find several well-preserved Aboriginal paintings shaped like hands and weapons.

The walking track to the Blackfellows Hand Cave from the small car park is very short but isn’t well signposted.

The track starts behind two large trees where a set of stairs goes up the hill into the bush. Keep following the path until you see the cave.

The Foundations Portland is a cultural hub and tourist attraction on the grounds where once the Portland Cement Works was located.

The most obvious highlight at The Foundations is the set of silos with huge murals of people painted on them.

These people were painted by artist Guido Van Helten and are all former employees of the Portland Cement Works. They represent all the workers who worked at this industrial icon.

Read more about The Foundations Portland.

The popular Glow Worm Tunnel walking track is located on the Newnes Plateau north of Lithgow.

The walk itself is only 2 km return and isn’t very hard. But the drive there is perhaps more challenging, with 30 km of unsealed road to conquer.

Will you see glow worms when you visit? In all likelihood, yes. The best way to see the worms glowing is by walking deep into the tunnel, standing still for about a minute, and turning off all your light sources.

The Great Zig Zag Railway was built in the 1860s to transport people and goods from the western plains of New South Wales to Sydney.

It is now an exciting tourist attraction, a ride on a classic steam locomotive travelling through beautiful scenery with great views of old sandstone viaducts.

Note that the Zig Zag Railway is currently closed due to restoration works, but is scheduled to be reopened sometime in 2022.

Located on Lithgow’s Main Street, Queen Elizabeth Park is a bit of an oasis in a town with such a strong industrial character.

Parks and gardens are indeed hard to find in Lithgow, which makes Queen Elizabeth Park (also known as Lithgow Park) such a pleasant place to be.

Note that Queen Elizabeth Park isn’t a spectacular attraction in Lithgow by any means, but it’s an interesting enough place in the town centre to stop by and wander around.

A visit to the Japanese Bath House near Lithgow is perfect for those looking for a relaxing activity in beautiful natural surroundings.

The bath house is quietly tucked away on a large block of farmland in South Bowenfels, facing the scenic Lake Lyell. It offers relaxation treatment packages, public and private bath sessions, tea rooms, and much more.

Lake Lyell is a water catchment created to supply water for the Wallerawang and Mount Piper power stations and is owned by Energy Australia.

The lake is a popular recreation area for fishing, water skiing, swimming and canoeing, especially during the summer. The recreation park is located on the south-western edge of the lake, accessible via Magpie Hollow Road.

Also worth visiting is the Lyell Dam. A visitor area with a small car park offers the opportunity to have a closer look at this fantastic piece of engineering.

Situated on the Fish River, Oberon Dam was built during and after WWII to help resolve chronic water supply problems in the area.

The dam has a wall height of 34 metres and a length of 232 metres. The dam wall is open to the public, with picnic areas and vantage points nearby to explore. Lake Oberon is also a popular spot for trout fishing.

Note that Oberon Dam is not really a day trip destination by itself. It’s best to combine it with a visit to Lake Lyell and the Jenolan Caves, all on the same scenic drive via Magpie Hollow Road, Sodwalls Road, Lowes Mount Road, and Edith Road.

Read more about Oberon Dam and other dams in and around Sydney.

The Jenolan Caves are the largest and most spectacular caves in Australia. The caves are located in Jenolan in the Central Tablelands region of the Blue Mountains, about an hour’s drive from Lithgow.

Visitors to the Jenolan Caves can choose from several guided tours to explore some of the caves with spectacular and unique limestone formations.

Read more about the Jenolan Caves.

Keen to do another long weekend away? Check out our guide to the best things to do in Orange for a complete list of attractions and activities in that part of New South Wales.