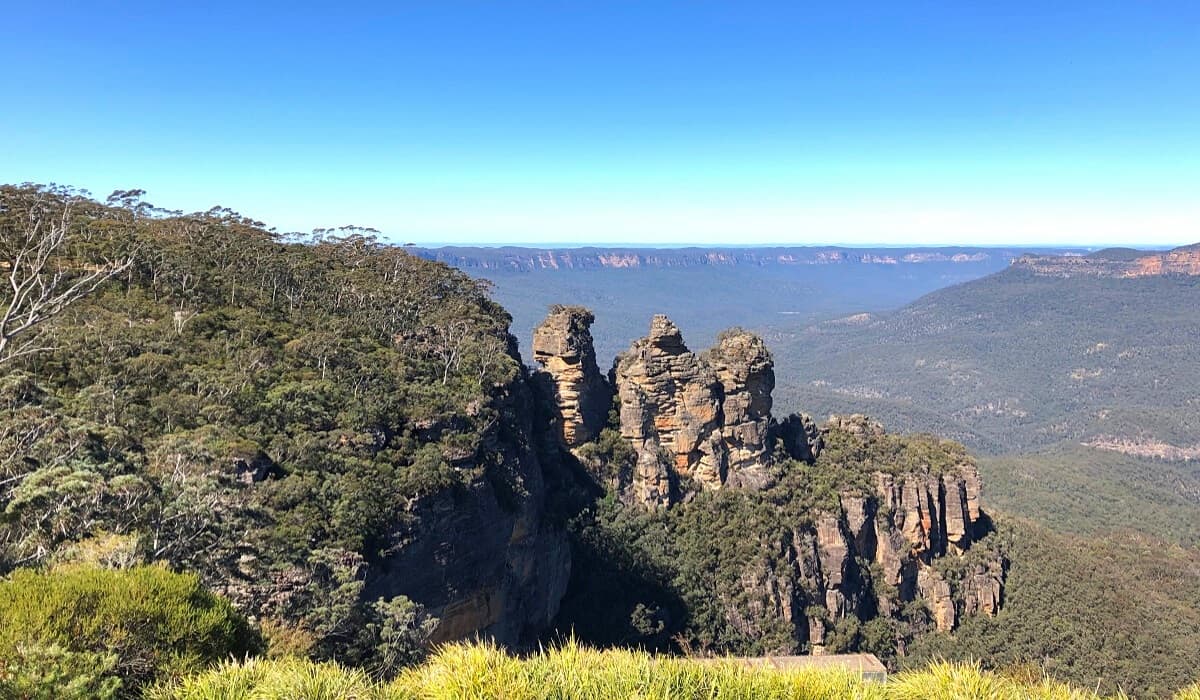 The Three Sisters is an iconic rock formation near Katoomba, overlooking the beautiful Jamison Valley. It is the most popular tourist spot in the Blue Mountains, attracting thousands of visitors every day.

Echo Point Lookout is a large viewing platform that offers panoramic views of the Three Sisters, the Jamison Valley, Mount Solitary and other landmarks.

A short walking track starting from the visitor centre at Echo Point gives visitors the opportunity to see the Three Sisters from close by, with several scenic lookout points along the way to enjoy.

As both Echo Point and the Three Sisters are major tourists attractions, they are very easy to get to.

Here is a link to their map location for your reference.

1. Car:
From the Great Western Highway, take the Katoomba exit via Parks Street. Turn right into Lurline Street and continue onto Echo Point Road. Alternatively, turn into Cliff Drive from Leura Mall and continue until you arrive at Echo Point.

There is a very small parking area which is almost always full during weekends. Street parking in the area around Echo Point is mostly paid.

Alternatively, you can jump on the hop-on hop-off Blue Mountains Explorer Bus which stops at the major sights in the Katoomba and Leura area, including the Three Sisters.

3. Organised Tour:
If you don’t have access to a car and don’t want to travel by public transport, an organised day tour to the Blue Mountains is a good solution. All tours visit Echo Point Lookout, and most will allow for enough time to be spent there to do the Three Sisters Walk.

About the Three Sisters

For many tourists going to the Blue Mountains for the first time, the Three Sisters is on top of the list of sights to visit. They are a rather unusual rock formation on the northern escarpment of the Jamison Valley, close to Katoomba.

The Three Sisters were formed by land erosion by wind, rain and rivers, causing the sandstone cliffs surrounding the Jamison Valley to be slowly broken up over time.

The Legend Behind the Three Sisters

Various Aboriginal legends exist about why this unique rock formation is called the Three Sisters.

Perhaps the most widely adopted version is that three sisters named Meehni, Wimlah and Gunnedoo were turned into stone as a result of a tribal conflict.

The three ladies lived in the Jamison Valley as members of the Katoomba tribe, and had fallen in love with three brothers from the neighbouring Nepean Tribe.

To protect the sisters from any harm during the tribal battle that followed, an elder turned them into stone.

As the elder didn’t survive the battle, and no one else was able to reverse the spell, the Three Sisters remained to be the unique rock formation that it still is today.

The only challenging part is the bit at the end where the track includes a short section of the Giant Stairway which is very steep.

The walk to the Three Sisters may be short, but there are lots of highlights to enjoy. The below track notes describes the walk along 7 highlights and landmarks:

The last highlight, the Spooners Lookout, can be visited as a sidetrip on the way back to Echo Point.

With stunning views of not only the Three Sisters, but also the Jamison Valley, Ruined Castle and Mount Solitary, Echo Point is one of the most popular lookout points in the greater Blue Mountains region.

Managed by the Blue Mountains City Council, Echo Point welcomes thousands of visitors each day, and for good reason. Echo Point is essentially a large square, with lots of activity during peak season. There are multiple viewing platforms at different levels to explore.

Echo Point was upgraded in 2020, with a brand new wheelchair-friendly boardwalk, a small amphitheathre with benches, and a beautiful viewing platform with picture perfect views of the Three Sisters.

Echo Point is also the starting point of various walking tracks in the Blue Mountains, some very short and easy (like the Three Sisters walk), while others much longer and more challenging.

From the Echo Point Lookout, make your way to the information centre from where you can access the walking path to the Three Sisters.

The entrance to the Three Sisters walk can hardly be missed, as it’s marked by a huge stone archway, located right next to the information centre.

The path is very well maintained, with several sandstone seats and interesting little animal sculptures along the way to enjoy.

Although not very well-known, the Oreades Lookout is actually one of the better lookouts in the Katoomba region.

Not only are the views fantastic, the viewing platform itself is also very spacious and well designed.

The next viewpoint is the Lady Game Lookout, a narrow, fenced lookout very close to the Three Sisters.

From the Lady Game Lookout, the path continues to the Three Sisters via a short section of the Giant Stairway.

Starting at the archway next to the Lady Game Lookout, the Giant Stairway is an impressive structure that consists of more than 800 steel and stone steps heading down into Jamison Valley.

Luckily though, to visit the first of the Three Sisters, you only need to conquer a very small section of the Giant Stairway.

The last part of the Three Sisters Walk is the so-called Honeymoon Bridge, which connects to a rock overhang that is part of the First Sister.

It’s quite a surreal experience to be crossing this little bridge and to be standing right next to the Three Sisters on the other side.

Mind you, it does get very busy here during weekends, so if you’d like to take photos and enjoy the views without the crowds, it’s best to get there early in the day.

On your return, it’s a good idea to visit the Spooners Lookout via a clearly signposted, short sidetrack. It’s an extra 5 minutes, and the views of the valley and the Three Sisters are very much worth it.

This Lookout was named after an Australian politician, Eric S. Spooner, who opened part of the Prince Henry Cliff Walk back in October 1934.

Also note that the Spooners Lookout is located only 200m away from the Visitor Information Centre at Echo Point, and it is also wheelchair accessible.

And that marks the end of the Three Sisters Walk, an easy but scenic walking trail, suitable for visitors of all ages and fitness levels!

As mentioned, Echo Point is not only great for sightseeing, it’s also the starting point for, and a major stop along, various walking tracks in the Blue Mountains.

The popular Prince Henry Cliff Walk is an adventurous 7km walking trail between Scenic World in Katoomba and Gordon Falls Lookout in Leura.

It follows the cliff edge overlooking Jamison Valley, with lots of beautiful lookout points along the way to enjoy some of the best views in the Blue Mountains. The track passes Echo Point and the Three Sisters around the halfway mark.

Starting at Echo Point and finishing at Katoomba Cascades, this 3km return walk is essentially part of the longer Prince Henry Cliff walk. The walk is relatively easy and takes in several scenic lookout points.

Katoomba Cascades is another popular tourist destination, with stepping stones and a path along Kedumba River, which drops into the valley via Katoomba Falls.

Also part of the same Prince Henry Cliff Walk, this track goes into the opposite direction, towards Leura Cascades, and passes several lookouts with scenic views of the other side of Jamison Valley.

Leura Cascades is a picturesque area, with great picnic facilities such as tables, seating, toilets and plenty of shaded sections. It’s the perfect spot to have lunch in beautiful natural surroundings.

The challenging Dardanelles Pass is a 5km circuit track that heads down into the rainforest of the Jamison Valley via the Giant Stairway.

The track returns to Echo Point via the cliff edge, just before Leura Cascades.

This is quite a challenging walk though, with a steep descend into the valley, as well as a steep ascent back up to higher ground.

This walk is a section of the historic Federal Pass walking track. It also descends into the valley via the Giant Stairway, but goes into the opposite direction, towards Scenic World.

Once you get to the Scenic World valley station, you can either go back up via a walking track, or you can catch a ride on the Scenic Railway.

Keep in mind that it can take up to 3 hours to reach the valley station from Echo Point, with the last Scenic World rides leaving just before 5pm.

Also read:
>> Top 35 attractions and activities in the Blue Mountains. 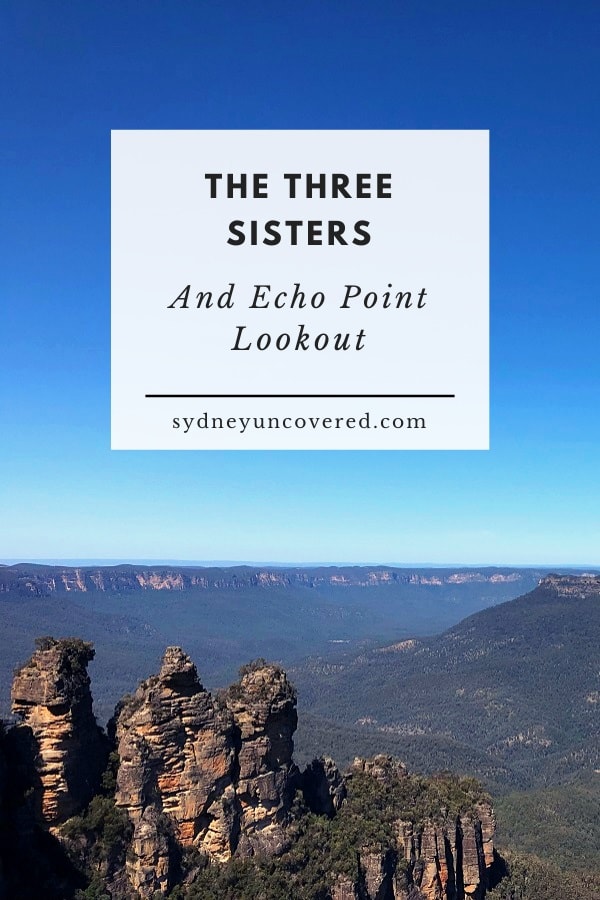