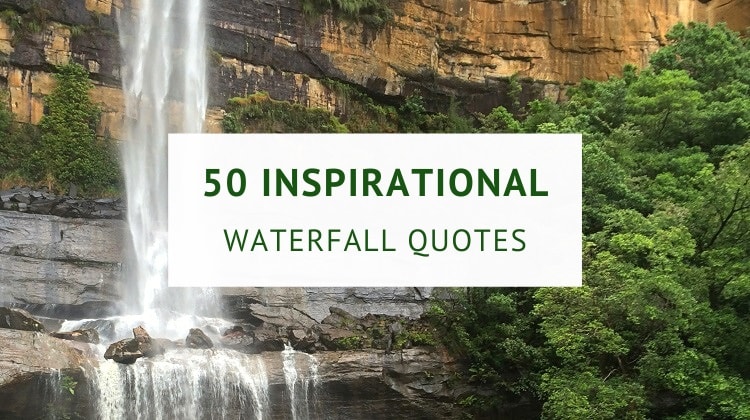 If there is one thing people love watching when out and about, it has to be waterfalls. Water plunging down into a valley or into a natural water hole, they’re a true gift from Mother Nature.

Waterfalls also have the power to inspire people, to write books, to philosophize about life, or to simply post your next Insta update with a worthy caption. Which is why we’ve collected 50 of our favorite waterfall quotes around the world.

Here are 50 waterfall quotes that you can use as an inspiration to head outdoors into nature right now to find your next waterfall.

1. “My mind is a raging torrent, flooded with rivulets of thought cascading into a waterfall of creative alternatives.”

2. “It was a world of acts, and words had no more influence on acts than the sound of a waterfall has on the flow of the stream.”

3. “A waterfall cannot be silent, just as the wisdom. When they speak, the voice of power speaks.”

4. “Grace is finding a waterfall when you were only looking for a stream.”

5. “Do not feel sad for your tears, as rocks never regret the waterfalls.”

6. “A waterfall is concerned only with being itself, not with doing something it considers waterfall-like.”

7. “Look with open eyes, and you will see the beauty of the waterfall.”

8. “Waterfalls wouldn’t sound so melodious if there were no rocks in their way.”

10. “When you’re young, there’s so much that you can’t take in. It’s pouring over you like a waterfall. When you’re older, it’s less intense, but you’re able to reach out and drink it. I love being older.”

11. “Another way to look at meditation is to view thinking itself as a waterfall, a cascading of thought. In cultivating mindfulness, we are going beyond or behind our thinking, much the way you might find a vantage point in a cave or depression in the rock behind a waterfall. We still see and hear the water, but we are out of the torrent.”

14. “Be soft in your practice. Think of the method as a fine silvery stream, not a raging waterfall. Follow the stream, have faith in its course. It will go on its own way, meandering here, trickling there. It will find the grooves, the cracks, the crevices. Just follow it. Never let it out of your sight. It will take you.”

15. “For an instant, silence, noisier than a waterfall.”

16. “When I was walking in the mountains with the Japanese man and began to hear the water, he said, ‘what is the sound of the waterfall?’ ‘Silence’, he finally told me.”

17. “There’s hope at the bottom of the biggest waterfall.”

18. “The idea is that flowing water never goes stale, so just keep on flowing.”

19. “Many a calm river begins as a turbulent waterfall, yet none hurtles and foams all the way to the sea.”

20. “While people are struggling unhappily in the cities against the cruel authorities, a waterfall happily and cheerfully flows in the nature; there is happiness only if there is freedom.”

21. “I can see my rainbow calling me through the misty breeze of my waterfall.”

22. “The point is that when I see a sunset or a waterfall or something, for a split second it’s so great, because for a little bit I’m out of my brain, and it’s got nothing to do with me.”

23. “Water is the most perfect traveller because when it travels it becomes the path itself.”

24. “Nature loves courage. You make the commitment and nature will respond to that commitment by removing impossible obstacles. Dream the impossible dream and the world will not grind you under, it will lift you up. This is the trick. This is what all these teachers and philosophers who really counted, who really touched the alchemical gold, this is what they understood. This is the shamanic dance in the waterfall. This is how magic is done. By hurling yourself into the abyss and discovering it’s a feather bed.”

25. “Sometimes, it’s hard to tell how fast the current’s moving until you’re headed over a waterfall.”

26. “Watch waterfalls of pity roar, you feel to moan but unlike before, you discover that you’d just be one more person crying.”

27. “There is a hidden message in every waterfall. It says, if you are flexible, falling will not hurt you.”

28. “There’s nobody living who couldn’t stand all afternoon in front of a waterfall. Anyone who can sit on a stone in a field awhile can see my painting. Nature is like parting a curtain, you go into it as you would cross an empty beach to look at the ocean.”

29. “Have you ever stood where a stream spills into a river? The two become one. They laugh over the stones together, twist through the sharp canyons together, plunge down the waterfalls together. It is the same when a man and woman love one another. It is not always a pleasant thing, but when it happens, a man has little to say about it. Women, like streams, can be smooth one minute and make a man feel like he’s swimming through white water the next.”

30. “Experiencing the present purely is being empty and hollow; you catch grace as a man fills his cup under a waterfall.”

31. “Leisure is a form of silence, not noiselessness. It is the silence of contemplation such as occurs when we let our minds rest on a rosebud, a child at play, a divine mystery, or a waterfall.”

32. “The vast waterfall of history pours down, and a few obituarists fill teacups with the stories.”

33. “A strong man and a waterfall always channel their own path.”

34. “They say that people who live next to waterfalls don’t hear the water.”

35. “A wise quote is like a spectacular waterfall. When you see it, you feel its power.”

36. “Once we have tasted far streams, touched the gold, found some limit beyond the waterfall, a season changes, and we come back changed but safe, quiet, grateful.”

37. “Have you also learned that secret from the river; that there is no such thing as time? That the river is everywhere at the same time, at the source and at the mouth, at the waterfall, at the ferry, at the current, in the ocean and in the mountains, everywhere and that the present only exists for it, not the shadow of the past nor the shadow of the future.”

38. “I recognized everything, the waterfall and the lakes, the trees and paths. But they had forgotten me. That was bitter and I cried a lot. One should never return to sacred places.”

39. “God is discovered entirely through creation – the brilliance of a sunset, the powerful roar of a waterfall, the symphony of sounds you hear in the heart of the forest, or the vastness of space and its countless stars.”

40. “Just as a waterfall grows slower and more lightly suspended as it plunges down, so the great man of action tends to act with greater calmness than his tempestuous desires prior to the deed would lead one to expect.”

41. “She dares me to pour myself out like a living waterfall. She dares me to enter the soul that is more than my own; she extinguishes fear in mere seconds. She lets light come through.”

44. “Twisting through the thorn-thick underbrush, scratched and exhausted, one turns suddenly to find an unexpected waterfall, not half a mile from the nearest road, a spot so hard to reach that no one comes to a hiding place, a shrine for dragonflies and nesting jays, a sign that there is still one piece of property that won’t be owned.”

45. “The waterfall winks at every passerby.”

46. “With meditation I found a ledge above the waterfall of my thoughts.”

47. “As long as I live, I’ll hear waterfalls and birds and winds sing. I’ll interpret the rocks, learn the language of flood, storm, and the avalanche. I’ll acquaint myself with the glaciers and wild gardens, and get as near the heart of the world as I can.”

48. “By the time we arrived, as evening was approaching, I felt as sore as a rock must feel when the waterfall has pounded on it all day long.”

49. “It was a world of acts, and words had no more influence on acts than the sound of a waterfall has on the flow of the stream.”

50. “A big waterfall makes you realize how tiny you and your problems are.”