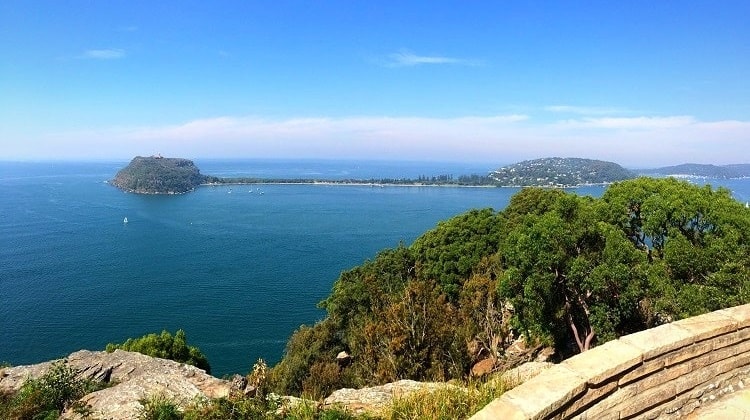 Widely regarded as one of the best lookouts in Sydney, the panoramic views from West Head will leave a long-lasting impression.

There are also various walks to do nearby, plus a couple of secluded beaches to visit, including West Head Beach. Read on to find out more!

The West Head Lookout is located at the very end of West Head Road in Ku-ring-gai Chase National Park. This road is accessible via McCarrs Creek Road.

Those two parking areas are marked in this map:

From the picnic area, you can walk to the lookout via the short and easy Red Hands Track (more on that further below).

Note that there is a $12 entrance fee to the national park, to be paid at the booth at the beginning of West Head Rd, or at one of the pay machines at the lookout.

Best time to visit? All year, but make sure it’s a sunny day for the best experience.

About the West Head Lookout

West Head is not just a beautiful lookout point, it also has a rich history.

The north-eastern tip of Ku-ring-gai Chase National Park was the perfect location for the army to protect Sydney against foreign invasion via Broken Bay.

The guns were located at the bottom of the headland, and the administrative area, including large sleeping areas, was located at the top. An inclined railway was built to transfer goods between these two locations.

At the time, West Head was a full-scale military site. This was quite an impressive achievement, especially because West Head was so hard to reach, let alone to build such an important and effective military fortress.

In the 1960s, the West Head Lookout was created, with a large sandstone viewing area and several information boards.

The views are so impressive that you could literally sit on one of the benches all day and just absorb the beautiful scenery around you.

West Head is now widely considered to be one of the best lookouts in Sydney and New South Wales.

Keen to find great hikes in this beautiful part of the world? Check out our list with the best Ku-ring-gai Chase National Park walking tracks for some great ideas.

A visit to the lookout is not complete without doing at least one of the various bushwalks nearby. Some of these walks lead to beautiful beaches, such as West Head Beach, Resolute Beach, and Great Mackerel Beach.

There are six exciting walks near the West Head Lookout:

Let’s have a closer look at each of these walking tracks.

The Koolewong Track is a nice and easy walk that leads to an exciting viewing point from where you can take in views of the Hawkesbury River, Lion Island, and Broken Bay.

The Red Hands Track is a relatively easy bushwalking track between the Resolute Picnic area and the West Head Lookout.

It’s called Red Hands because it passes a large rock overhang that was used as a cave by Aboriginals thousands of years ago.

If you look closely, you might see an Aboriginal artwork in the shape of two hands in the cave.

The start of the track can be found at the Resolute Loop Trail sign at the picnic area. At that sign, follow the trail for about 50 meters until you arrive at an intersection where you turn left to do the Red Hands Track.

The West Head Army Track was officially opened on May 14th, 2016, and allows visitors to experience what it must have been like to protect the country against a potential invasion during WWII.

The track is short but quite hard with a grade 4. Part of the track is so steep that a ladder structure was installed to help with the descent down to the old West Head army battery.

Once there, you can wander around and see the gun emplacements and battery observation posts from close by.

Please be mindful that the West Head Army Track is very steep and climbing back up can be quite a challenging effort.

Make sure you bring appropriate footwear and enough water with you. When using the ladder, make sure you use both arms and face the ladder at all times.

If you’re keen to visit a beautifully secluded beach, the walk to West Head Beach is an absolute must. It’s only a short walk through the bush, with a steep set of stairs leading down to the beach.

West Head Beach is quite a small beach, opposite the Barrenjoey Headland on the other side of Pittwater. And with the amazing views and emerald green water, it certainly does feel like you’ve ended up in a small pocket of paradise.

The water is usually calm, perfect for a quick swim and a bit of sunbathing. If it’s too cold to swim, a picnic right at the beach is not a bad idea either.

From West Head Beach, the walking track continues to Resolute Beach, another beautiful secluded strip of sand with beautiful views and calm waters.

The track between West Head and Resolute Beach can get a bit challenging at times, with a few steep sections, and also a creek crossing, but the serenity of the beach makes the walk worthwhile.

To do the loop trail, look out for the walking track going up the hill, not too far away from the beach. This track connects with a fire trail that in turn connects with the picnic area.

Read more about this fantastic walk in our guide to the Resolute Beach Loop Trail.

As mentioned, from Resolute Beach you have the option to visit a third beach, which is another 600 metres further south. This extra walk is not difficult, but the surface is quite uneven with lots of rocks.

The track arrives right at the beach, so there is no descent via a set of stairs required like with the previous two beaches.

Great Mackerel Beach is also the name of the suburb located right behind the beach. It has a small ferry wharf, with ferries travelling between Great Mackerel and Palm Beach.

Go ahead and have a look at the fascinating real estate behind the beach, but watch out for the golf carts and wheelbarrows that are used to carry luggage and other things around.

Once you’ve finished exploring this fascinating suburb, retrace your steps back to either the West Head Lookout or the Resolute Picnic Area.