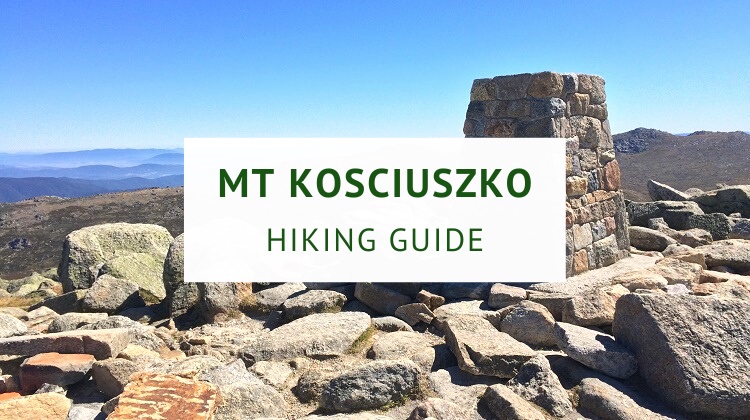 Mount Kosciuszko in the Snowy Mountains in New South Wales is Australia’s highest point, peaking at 2,228 metres above sea level.

While Mt Kosciuszko is primarily known as a busy ski destination during winter, the area is also a popular spot for hiking and mountain biking during the warmer summer months.

Mount Kosciuszko was discovered and climbed in 1840 by Sir Paul Edmund Strzelecki, a Polish explorer and scientist who surveyed large parts of NSW, Victoria and Tasmania.

Strzelecki named the mountain in honour of Tadeusz Kosciuszko, a Polish-Lithuanian statesman and military leader.

In later years, it was determined that the mountain peak known as Kosciuszko was actually lower than its neighbour Mount Townsend.

In 1892, the NSW Lands Department decided to swap the names of the mountains so that Mt Kosciuszko could keep the status of being the highest peak in Australia.

Mount Kosciuszko is part of the Australian Alps, which consist of the Snowy Mountains and the Victorian Alps.

Where to Stay in the Snowy Mountains

The best places to find accommodation in the Snowy Mountains to climb Mount Kosciuszko are Jindabyne, Thredbo, Perisher and Charlotte Pass.

Thredbo, Perisher and Charlotte Pass are situated within Kosciuszko National Park, which has a vehicle entry fee of $29 during the peak winter months (from June to October) and $17 during the rest of the year.

Located just outside Kosciuszko National Park, Jindabyne is a small town overlooking the man-made lake with the same name.

Jindabyne is a popular year-round holiday destination with lots of things to do, such as mountain biking, bushwalking, horse riding, fishing and kayaking.

Lake Jindabyne was formed in the 1960s as a result of the construction of the Jindabyne Dam on the Snowy River.

The dam was built as part of the Snowy Mountains Scheme, Australia’s largest hydroelectricity and irrigation complex, providing electricity and additional water to regions further inland.

To get to Jindabyne, follow Kosciuszko Road from Cooma for about 50 minutes (60 km). From Jindabyne, it’s only a half-hour drive to Thredbo.

Thredbo is the most convenient and also most pleasant spot to stay, as it’s the starting point of the Thredbo to Mount Kosciuszko walk.

This track starts with an exciting ride on the chairlift, located in the centre of town. Thredbo has a friendly atmosphere with various hotels and restaurants to choose from.

To get to Thredbo, turn into Alpine Way in Jindabyne and stay on this winding road for about 30 minutes. Turn into Friday Drive, which takes you into town past all the hotels and shops.

Perisher is the largest and most popular ski resort in Australia, with numerous ski fields and lifts.

To get to Perisher, follow Kosciuszko Road from Jindabyne for 30 minutes. Charlotte Pass is another 10 minutes drive further west and is the starting point of the Summit and Main Range walks.

It’s important to point out that Perisher and Charlotte Pass aren’t very lively during the off-season.

So, if you’re looking for a bit more atmosphere and more things to do, Thredbo would definitely be a better choice.

Walking Tracks to the Summit of Mount Kosciuszko

There are three main walking tracks that lead to the summit of Mount Kosciuszko:

The shortest is 13 km long, and the most challenging one is a 22 km circuit walk. All three walking tracks intersect at Rawson Pass, close to the summit of Mount Kosciuszko, so combining sections of the walks is an option.

There is, in fact, a fourth walking track to the peak of Mt Kosciuszko. The very steep 15 km long Hannel’s Spur Track is the original route that Strzelecki followed in 1840 to reach the summit.

The badly overgrown Hannel’s Spur Track is Australia’s biggest vertical ascent of 1800m and is really for experienced hikers only.

The map below gives you a rough indication of where the three main walking tracks are located.

The second part of the Main Range walk is essentially the Summit walk back to Charlotte Pass, making it a circuit.

Be mindful that even during the warmer summer months, the weather in this area can be extreme, with hot and cold days, strong winds, rain, and snow.

UV levels can also be extreme, even on cold days.

The shortest, easiest and most popular walking track to the top of Mt Kosciuszko starts at the Kosciuszko Chairlift in Thredbo.

While some sections along this walk are steep, most of the walking track consists of a comfortable metal walkway.

You can buy a one-way ticket and make your back to the base via a walking track or purchase an all-day pass. While the trip with the chairlift is a bit pricey, it’s quite an adventure in itself.

The best option is to buy an all-day pass online in advance, which is cheaper and easier than buying at the ticket counter.

At the top are two restaurants where you can have a drink and some food, while enjoying great views of the surrounding area. The top restaurant, Eagles Nest, is Australia’s highest restaurant.

The actual walking track starts right behind the chairlift station.

One of the most interesting sights along this walking track is Lake Cootapatamba, a post-glacial mountain lake located 800m below the summit of Mt Kosciuszko.

Lake Cootapatamba is one of several lakes in Kosciuszko National Park, created by a natural damming process.

The lakes are the highest in Australia and have no fish, are very low in nutrients, and are covered with ice in the winter months.

Rawson Pass is where the Summit Walk on the old Kosciuszko Road meets the Thredbo to Mt Kosciuszko walking track. The last section to the summit starts at this Rawson Pass intersection.

This is also the location of Australia’s highest public toilet.

It was built in 2007 to deal with the increasing amount of hikers and cyclists visiting the mountain each summer.

The walking track winds itself around the summit of Mt Kosciuszko until you reach the very peak, the perfect spot for a picnic and, of course, the obligatory selfie.

The views of the surrounding landscape are breathtaking and make you feel very small. Keep an eye out for Mount Townsend, officially only 18 metres lower than Mt Kosciuszko.

Until 1977 it was possible to drive from Charlotte Pass to a point past Rawson Pass, but the road was closed in that year due to environmental concerns. The track is open to hikers and cyclists only.

Cyclists will need to leave their bicycles at Rawson Pass and complete the last stretch to the peak of Mount Kosciuszko on foot.

The track crosses the Snowy River bridge and passes the Seaman’s Hut, a small cottage on the road to Mount Kosciuszko.

It was built in 1929 by the parents of a skier who died during a blizzard the year before.

The purpose of this hut is to provide emergency shelter to those who need it to prevent the recurrence of a similar tragedy.

The Main Range walking track is a full-day outdoor adventure, bringing you the best of the Australian Alps scenery.

It’s the length that makes this once-in-a-lifetime walking track challenging, but the track overall is reasonably flat and well-maintained.

The walk crosses the Snowy River twice and offers panoramic views of several alpine lakes along the way.

A major highlight is Blue Lake, one of only four cirque lakes on mainland Australia. In 1996, Blue Lake and its surroundings were recognised as a wetland of international importance.