Home » Things to Do » Leisure » Where to Play Padel 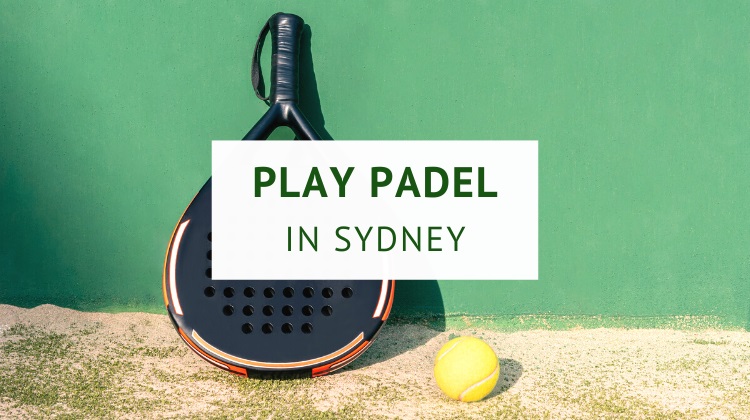 Padel is one of the fastest growing sports in the world, yet it is still very much unknown in Sydney and in Australia as a whole.

While you won’t have any issue finding a padel court in many European countries, Australia still has a lot of catching up to do. And that’s where we come in.

In this article, we are going to explain what padel is and where you can find courts and clubs in Sydney and in other cities around Australia.

Padel is a racket sport that was invented in Mexico in the late 1960s, and has since spread to various other Latin American countries. It has also become extremely popular in Spain and other European countries.

We all know tennis, and most of us will also be familiar with squash. Padel is best described as a mix of those two sports. It’s very similar to tennis in setup and scoring, with the key difference being that the court is surrounded by glass and mesh walls.

Padel is always played in doubles, although for training purposes, playing one against one is also possible. It’s a relatively easy-to-learn sport where strategy is more important than power, and is suitable for all ages and fitness levels.

A padel court looks very similar to a tennis court, with a net in the middle, and glass and mesh walls surrounding the entire court.

The court measures 20 x 10 metres and is approximately one-third smaller than a professional tennis court.

The walls create a cage-like structure and have a door at each end of the net. The ball can be played off the walls, similar to how squash works.

During a rally, a player is allowed to run outside the court to return a ball into play when the opponent smashes the ball such that it goes over the walls.

A padel racquet is smaller than a tennis racket, is made of solid materials, and has holes rather than strings.

It comes in three different shapes:

Which racquet you choose will depend on your skills, your style of play, and your personal preferences.

Check out this video with a brief explanation of padel:

Sydney is the city where padel was first introduced to Australia in 2016 and now has two locations where you can go for a hit.

The club is located in the heart of Sydney, easily accessible by car and only moments away from Mascot train station.

Padel Sydney is the first established padel club in Sydney and in Australia, currently located within the grounds of Tennis World in North Ryde.

The club is home to four outdoor courts and offers memberships with social sessions for all levels, drills, coaching, and court bookings.

Outside Sydney and New South Wales, there are currently four locations where you can go to play a game of padel.

The Gold Coast in Queensland is currently home to one padel club, located within the KDV Sport complex on Nerang Broadbeach Rd in Carrara.

Based in Docklands with lovely water views as a bonus, One Padel offers three courts under high roofs, which means you’re playing outdoors while also being protected from the elements.

In addition to social events and club nights, players can book courts at One Padel through the internationally used Playtomic app.

Padel Perth Reabold is located in the Reabold Tennis Club in Floreat in Western Australia and is home to three outdoor state-of-the-art padel courts.

Part of the Melville Palmyra Tennis Club, Padel West is a small and friendly padel club with two outdoor courts.

The courts are available for hire from 7 am to 10 pm, seven days per week, and the club also organises social and coaching sessions.